The Beautiful Mess That Was The 1925 NFL Season

“Um, we still don’t really know how championships should work?”

As we’ve discussed previously, when the NFL was getting off the ground, things were patently ridiculous. That’s not too surprising—frankly, the early days of any professional sports league looks silly in retrospect. By the sixth season of the league’s existence, things were starting to settle somewhat, but clearly they still had some growing pains.

In fact, 1925 might very well be the most absurd season in NFL history. And no matter what you thought of last week’s Super Bowl (WHY DIDN’T YOU RUN THE BALL MORE ATLANTA), at least you know that the Patriots are the top team in the league this year (SHUT UP BOSTON FANS).  1925 did not have that luxury. Let’s take a dive, shall we.

The Beautiful Mess That Was The 1925 NFL Season 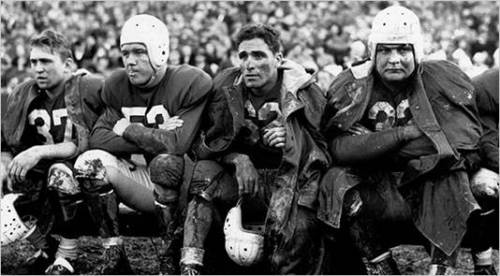 The 1925 NFL season started with some major shuffling. Gone were the Kenosha Maroons (you’re favorite team, we’re assuming), and the Racine Legion and Minneapolis Marines mothballed the season (yeah, apparently you could just decide not to field a team for a season if you felt like it back then). But with the addition of the New York Giants, the Detroit Panthers, the Providence Steam Roller (not plural, for some probably dumb reason), and the Canton Bulldogs, the league sat at 20 teams, its largest roster yet.

The NFL still employed the “you can play as often as you want” tactic, meaning that the Duluth Kelleys (who shockingly folded two years later) only played 3 games (all losses) while the Frankford Yellow Jackets finished sixth in the league despite having two more wins than any other team…because they played 20 games and went 13-7. Five teams, or 25% of the entire league went winless.

But the real story of the 1925 lies in the disputed championship between the Chicago Cardinals and the Pottsville Maroons. 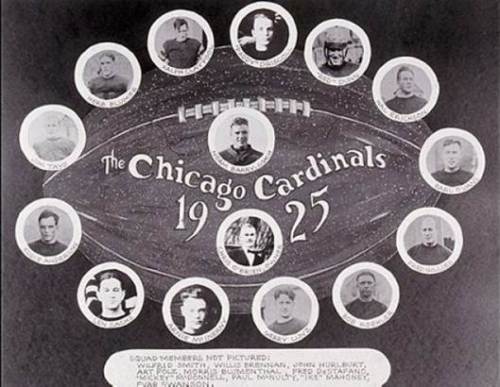 First of all, astute readers might recognize that the Pottsville Maroons in the running for the title were playing their first ever season in the NFL.  It’s not often you see a team compete for a championship in their first ever season, but at this point the NFL was less of a draw than college football, so the level of quality was, let’s say, somewhat lacking.  Now, the rules at the time dictated that the NFL title would go to the team with the best record at the end of the season.

As the season was drawing to a close, the Chicago Cardinals had a 9-1 record, and were being hotly pursued by the Maroons, who were 9-2.  On December 6th, Pottsville played the Cardinals at Comiskey Park in Chicago and gave them a good curb stomping, easily winning 21-7.

This was at the time considered an almost default championship game.  But the season wasn’t over yet. The Cardinals had scheduled two final games against the Milwaukee Badgers and the Hammond Pros, though they claimed this was not an attempt to regain the best record in the league, but rather a ploy to try to convince the Chicago Bears (a guaranteed huge crowd) to play them one last time that season.

Now, that being said, the Cardinals also picked the Badgers and Pros because they were pure garbage teams.  To call these cupcake games doesn’t quite do it justice. The Hammond Pros went 1-4 for the season, though comically enough their sole win was against the Cardinals at the beginning of the season.

The Badgers, however, literally existed to lose games. They went 0-6, and they even lost their one exhibition game against the Toronto Tigers. Excluding the exhibition game, they scored seven points all season.  Total.  As in, their only touchdown scored all season came in the 40-7 loss to the Rock Island Independents. They were so bad that the Cleveland Browns could  beat them.  We know, right? 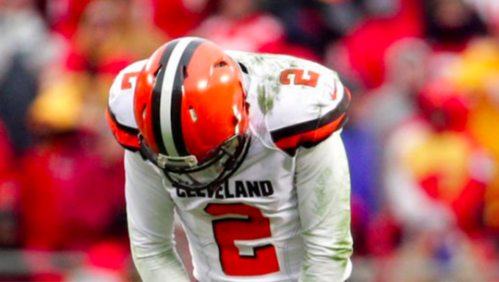 Well, they PROBABLY could take the Badgers

Now, the second of the two games, played December 12th against the Pros, proved to be somewhat close, with the Cardinals eking out a 13-0 win. However, their December 10th win against the Badgers probably should go down as the most absurd game in NFL history.

You see, the owner of the Badgers, Ambrose McGuirk, lived in Chicago and was worried about being able to get his team down to Chicago for the game. The Cardinals owner, Chris O’Brien, could tell that the game was going to be a rout before it even started, to the point that he decided not to charge attendance to anyone who showed up to watch the game.

The Cardinals would have crushed the Badgers no matter what, but their backup quarterback, Art Folz, decided he didn’t want to chance it.  He convinced four high school students from Englewood High School to join the Badgers under fake names.

Two things to point out at this point.  A—yes, these high school players played in the game and, most impressively, B—none of the team’s players, coaches, or even the owner realized it.  How does that even happen!?  “Hey, who are those four 17-year-old looking kids?  Are they on our team?”  “They said so.  Their names are Totally Real, Football Johnson, Guy McFootballFace and John Doe.”  “Sounds legit, let’s go out there and win this one for Guy McFootballFace!” 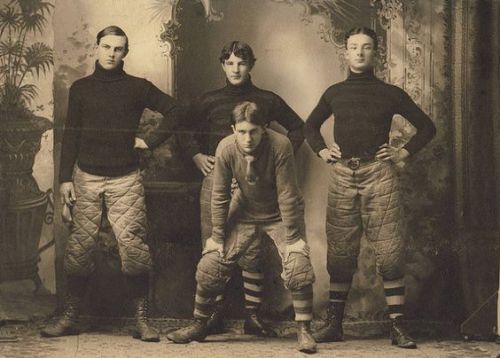 Yes, these seem to be fully-grown adults, let them play!

Now, a few weeks later, the NFL President discovered this subterfuge and immediately punished those involved.  O’Brien was fined $1,000, despite claiming he was unaware high schoolers were involved.

Ambrose McGuirk was told he had 90 days to sell his team (which, honestly, makes sense, if you can’t tell you have high schoolers on your team that you didn’t hire, you shouldn’t be running a team) and Folz was banned from football for life.  The next year, the fine and lifetime ban were rescinded, because the NFL was so ridiculous at this point that they were concerned that Folz would join a competing league instead (he ended up retiring), and the $1,000 fine would have been enough to put the Cardinals out of business.  For reference, $1,000 in 1925 is the equivalent of $13,000 today.  So apparently that’s all it took to make a football team insolvent back then.

The NFL also claimed that the win would be stricken from the record, only…they never got around to doing that.  It is still an official NFL game, according to league records.

While all this was going on, Pottsville decided to play two exhibition games before their last NFL games that would solidify their title.

They won both exhibition games including a dramatic 9-7 win against the Notre Dame All-Stars on December 12th. Keep in mind that this was during a time where college football was viewed as more legitimate than the NFL, so this win actually gave the league an air of legitimacy. However, this is where things took a turn for the stupid.

The Notre Dame game had been originally scheduled by the Frankford Yellow Jackets, meant to pit Notre Dame against the top NFL team.  After defeating the Maroons to start the season, Frankford assumed they were going to be the league’s top dogs.

But when the Maroons beat them later in the season, and eventually became the top team in the league, the exhibition game went to Pottsville. Because the Maroons played in a tiny high school stadium, they decided to play at Shibe Park, which could seat 30,000, to meet the high demand for the game.  S

hibe Park, in Philadelphia, was technically in the Yellow Jackets’ territory.  So Frankford protested the venue, and when the Maroons played anyway (they claim they got verbal confirmation from the league that it was okay), they were suspended from the league.  This prohibited them from playing their last NFL game, which would have given them the title, and as a result the league gave the championship title to the Chicago Cardinals, a team that literally padded their win total by playing high schoolers just days prior. 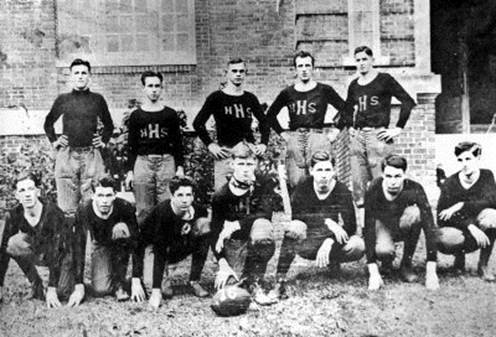 O’Brien of the Cardinals refused to accept the championship, saying that the Maroons had beat him fair and square, which was decent and classy of him.

The 1925 championship went unclaimed (apparently you could also just ‘not claim’ a championship back then) until The Cardinals were purchased by the Bidwill family in 1933 and the new owners were like, “Oh, neat, free championship.”  Pottsville fans in return have decided to curse the Cardinals (no, seriously).

While the Cardinals did win another NFL Championship in 1947, they have since moved to Arizona, where they remain winless.  Are they cursed?  Well, no, curses aren’t real. They’re just bad.

The owners of the Cardinals have continually pushed to keep the title, and they now have the longest title drought in the NFL, so, actually maybe they are cursed.

So ultimately, the 1925 season involved teams playing until *shrug* they felt like stopping, and had the championship go to a team that illegally played a game against high schoolers, because the real champions were suspended for playing in the same city as another team. The NFL was ridiculous in the 1920s, everyone.