Back in 2013 we wrote what, arguably, is our most divisive article that doesn’t insult ALDI. In this article, we looked at all the regional pizzas in America, and told you which ones were ass. A lot of people felt compelled to defend St. Louis pizza! We didn’t know that there were so many wrong people in the world! And we get it, pizza is a touchy subject for some people. Like, it really shouldn’t fucking be, it’s just sauce, dough and cheese with other shit tossed in sometimes, but whatever, we’ll play along.

So when one of our interns suggested we do another pizza article, we took away his bourbon privileges for the rest of the day. Who wants to deal with those kind of headaches? But then we took a step back and said, fuck it, we’ve got a deadline to meet and literally every other staff writer was passed out drunk after celebrating a very important holiday in the office that we call “Wednesday on a kind of chilly day.”

So how can we talk about pizza in a way that won’t piss everyone off? Maybe, just maybe, for once, we’ll just talk about food without commenting on how delicious or gross we find it. It’s a novel concept, for sure. So fuck it, let’s give it a go. Here are some pizzas from across America that you likely have never encountered before.

It’s not unusual to see a city, or region, decide to make pizzas with their own unique spin. There’s nothing wrong with this, of course, and usually the result is, like, fine. Some of these, such as Chicago-style and New York-style, are nationally famous, with pizzerias replicating their methods throughout the nation.

Others are less well known, but still fantastic, like your New Haven-style pizzas. However, we’ve decided to talk about pizzas styles that might be new to you, the reader. Unless you’re from, like, Jersey, in which case you’re going to be very annoyed that we’re claiming that your obscure pizza styles are obscure. Fun!

Now, this is the part of the article where we admit that one of our Midwest writers did the bulk of the writing and research. If you live in New England, you’ve no doubt encountered Greek pizza, and have officially written us off as drunk idiots. To you we say, fuck off, that’s only ¾ of the way true! For the rest of you who are hearing about Greek pizza for the first time, you’re…not really missing out? The general consensus seems to be “it’s fine.” There’s not a lot to differentiate this pizza from other styles, but enough for it to have a name.

A New England Greek pizza utilizes a thin crust, obviously, though they roll it thicker than, say, a New York slice, and bake it in a shallow pan instead of directly in the oven. The cheese is typically a blend of mozzarella and cheddar, though some places will swap in some provolone. If we had to choose an ingredient that we’d call the most “unique” part of the pie, we would have to pick the thick tomato sauce that’s heavily laden with oregano.

Oh, and it also tends to be greasier than many other pizza styles. We…God, we hope that it’s not called Greek pizza because of that…no, that…that’s not a Greek stereotype, right? Because the last thing we want is to start a feud with the Greeks over a pizza joke.  We should be fine though, right? It’s not like it’s a hairy pizza or something, now that would be offensive. Shit we should stop digging ourselves deeper into this hole and just move on to the next pizza, right? 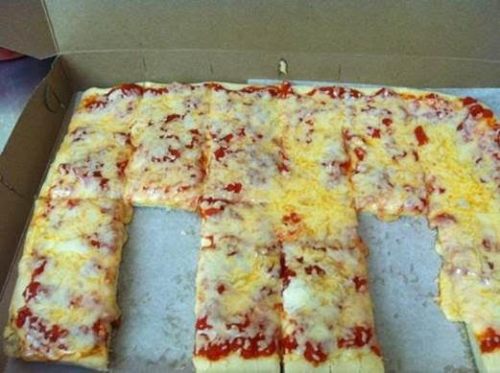 When you think of places that have created their own pizza, you don’t really think of Pennsylvania towns with fewer than 8,000 residents. But the village of Old Forge cares not for your presupositions. The restaurant Ghigiarelli’s claims to have invented this particular style in 1926, where they served rectangular pizza slices to miners who would frequent the establishment.

Now, rectangle slices on a pizza are unusual, but not unheard of. Quad City-style pizza, for example, is cut into strips with scissors. Which is dumb, but whatever. Anyway, an Old Forge pizzas come in two varieties, red and white.

A red pizza has a slightly sweeter and onion-y taste (some places put diced onions in the sauce), and is generally topped with a blend of cheeses. There’s no real set recipe for Old Forge—if you’re having an Old Forge pizza, you’re likely eating at one of the dozen or so “pizza cafes” lining the town’s Main Street, and each uses their own unique cheese combo, usually involving mozzarella, cheddar, or American cheese.

The white pizza, on the other hand, is sauce-less—you take cheese and toppings (usually spinach or broccoli) and fold the dough over it. It’s basically like a Hot Pocket, only instead of a Hot Pocket it actually tastes “good” instead of “like soul crushing sadness and loneliness, and also I guess meatballs? Did I get the meatball Hot Pockets or was this a pizza one? I threw away the box and don’t want to fish it out of the trash to find out.” So yeah, it’s pretty decent!

They do a few other “quirky” things with the pizza, because if you’re a tiny town trying to call yourselves the Pizza Capital of the World (yes they do that) you know they’re going to do insufferably kitschy shit call their slices “cuts” and their pies “trays.” Which, whatever, we get it, you’re “unique.” Just stick to the pizza and quit with the braggin’. 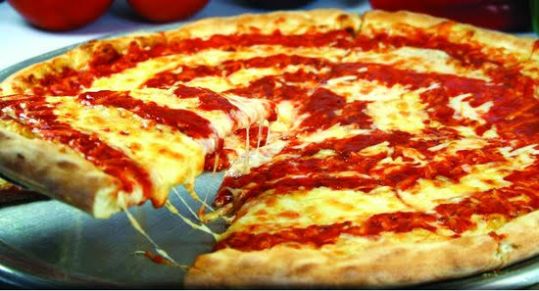 So apparently when you want pizza in the Jersey shore, you’re going to find an item that is a bit unique compared to other regional pizzas. It’s basically just regular pizza, but they swirl sauce on top of the cheese. Does this look cool? Sure, we guess. Does it make things impossibly more messy?

Does it tastes good?

Now, some people might know it as a Grotto Pizza, named for the Delaware-based chain of the same name that does the same swirl pattern. Grotto was founded in 1960, but we suspect if we dared claim that  a Delaware place invented it our Editor-in-Chief would wake up with a dozen pounds of Taylor sausage in his bed as a threat from a collective of Jersey residents.

We’re probably stretching the rules here a little bit, since there’s not really a unified style of pizza in the area. This is more of an instance of “there’s a pizza place that’s been there for like 70 years that does pizza in a weird way.”

We’re honestly not sure we should be including this on the list—some would say that Mama’s Pizza is the most popular pizza place to hit in Omaha, but their pizzas are more or less your standard thin crust. Really we’re just going off of an article about La Casa that calls it Omaha-style pizza, and we decided to add it.

But pushing through, La Casa makes a weird pizza. Just weird. We promised we weren’t going to get all “political” and talk about how good or bad a pizza sounds, but this seems like a variation of St. Louis-style pizza, which as previously established, is butt.

Anyway, the crust at La Casa uses no yeast (oh no), and is also grilled as well as baked? They offer mozzarella or…Romano cheese, which again, a weird choice. Finally, they basically cover the damn thing in hamburger meat (you can also add mushrooms and onions to said meat).

All of which is deeply weird, and somewhat upsetting. We kind of regret putting this on the list, actually, considering we just asked one of our staff members who lived in Omaha for 8 years if he’s ever heard of Omaha-style pizza, and he just said, “What? Fuck no.”

This pizza is another pretty big stretch, as this too stems from the basic conceit of “one place makes it and gave it a specific name, but fuck it, we’re calling it a pizza variation.” Beau Jo’s has a handful of locations throughout the state of Colorado, and claims to serve a “Colorado Style Pizza” which, as far as we can tell, consists of the Mountain Pie, which is less a pizza and more “something invented to give aneurysms to the kinds of people who think that Chicago Deep Dish has too much bread.”

Originally conceived of forty years ago in Idaho Springs to combat the stereotype that Coloradans are healthy, these calorie loads use braided crust that allows pizza that literally is sold by the pound. No seriously, their “small” is one pound, and their Extra Large is five pounds of pizza. We’re not sure if we’re mad or impressed.

Finally, we head down to Brier Hill, a neighborhood in Youngstown, Ohio. Considering that Youngstown was one of those “steel cities where things got real sad in the 1970s” we were worried about this one. Like, was this going to be super depressing? The answer was, meh, kind of but not too bad.

It’s similar to pizzas made in the Basilicata region of Italy, and was first created for a church fundraiser in 1974 before “spreading” to the point that it at least warrants a section on Brier Hill’s Wikipedia page. So that’s something! It’s cooked in a pan and is comprised almost entirely of dough smothered in a thick tomato sauce. Some Romano cheese is then added, along with some chopped green peppers. Other varieties include one with hot peppers (intriguing) and egg (less intriguing).