“Listen, kids will drink anything if you just fill it up with sugar.  So, can we just do that?” 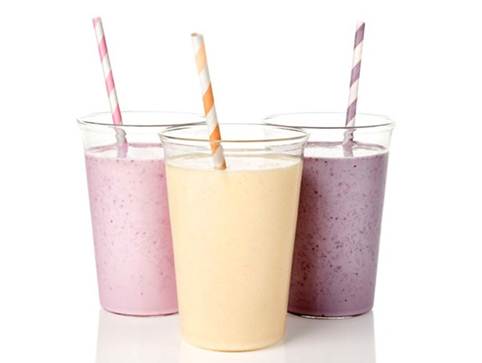 Americans consume an impressive amount of milk on average—over 20 gallons per person, and that includes vegans who live life incorrectly.  The dairy industry is one of the largest agricultural groups in the nation, and most Americans grew up having milk crammed down their throats through school lunches and parents telling them to “drink your milk so you can grow up big and strong” or, in the case of AFFotD’s staff, “drink your milk so you can have a good base coat before you switch to whiskey.”  And while milk is delicious, many people view it as a healthy beverage, and the average American child would rather chew off his own arm than purposely consume something healthy.  And because this is America, and our government is secretly run by sugar lobbyists (don’t believe us?  Ask a European if they think our bread tastes sweet) we’ve naturally decided that there is only one way to make sure that kids drink enough milk for their bones to become calcified adamantium.

Apparently we couldn’t really justify just adding a bunch of sugar to regular milk, so that added hyperactivity had to be introduced through various flavors, with varying success.  Now, we can all support chocolate milk, and while the taste/potential abject horror of strawberry and banana flavored milk can be easily questioned, they’ve unfortunately been around long enough to be merely “gross” and not “oh my God, what have we done” to the modern American consumer.  That doesn’t really forgive us for the sins that we’ve otherwise committed on dairy in our quest to turn milk from “a kind of thick white liquid we squirt from the bottom of a cow” to “candy!” in the minds of America’s youth.

Take solace, Lactose Intolerance sufferers of America.  You might miss out on cheese, and yogurt, and pizza, oh God now that we start listing things you can’t have we suddenly feel so bad for you, but you at least don’t have to deal with these.

Now, we’re sure Japan has done some horrific things to milk, but unfortunately this is an area of culinary wrongdoing that we’re able to find pretty easily within our own borders.  America, thankfully, doesn’t really have a claim on flavored milk—it’s apparently most popular in Australia, and if you live in a country where the sole purpose of your natural surroundings is to kill you in the most inventive and horrific ways possible, you can do whatever the fuck you want to your milk, with our full blessing.  But that doesn’t mean that America doesn’t get involved.

Now, outside of “taking a glass of milk and putting chocolate syrup in it” just about every type of flavored milk you encounter has a longer shelf-life than plain milk, which is both economical and mildly upsetting the more you think about it.  Advocates of flavored milk (sadly, probably correctly) say that kids will avoid the nutrition of milk unless it’s made to taste like licking the bottom of a bag of Halloween candy, tossing aside health concerns by saying, “What’s a little sugar between friends if it’ll get kids filled with protein and calcium?”  For those of you keeping score at home, yes, the flavored milk industry’s official policy on putting sweetened milk products mirrors Mary Poppins’ official “Just a spoonful of sugar helps the medicine go down” stance.

These are products that try to help the medicine go down, and oh Lord, how they fail.

Listen, we know we said that we loved this in our article about it, but we merely loved its existence in a “look how fucking insane we can be” way.  Coca-Cola’s strange school-lunch-only milk product might be hilarious, but it also sounds horrendous.  This sugar beverage calls itself a milk product because it’s 51% skim milk, which you might recognize as the same tactic business men take in movies when they walk into an opponent’s board room meeting, are told, “You can’t be here, this is my company” and respond with, “Not anymore.  I just made an interesting purchase of stock…you would not believe who is the new majority shareholder” before an evil laugh sets up an eventual Act 3 redemption.

They have a chocolate drink, which isn’t chocolate milk because chocolate milk generally is a simple combination of “lots of milk” and “enough chocolate to make it not taste like milk” and we’re just going to assume (and honestly, pray) that the other 49% of the drink isn’t just chocolate.  It also has a blueberry and strawberry mix called “Blooo” that schoolgirls could give to boys as a polite way to say, “Don’t ask me out, I’ll say no” and a Vanilla/Banana mixture whose mere existence is enough to make all of the milk in your fridge instantly spoil the moment you hear about it.

Swerve thankfully no longer exists, but it’s just a matter of time before Coca-Cola tries to make alcoholic yogurt again (not a joke, that was the original product that eventually turned into Swerve) and tries this again.  And they must be stopped.

Oh God. No, this is real, and we’re sorry.  Just this year, Prairie Farms decided to take marshmallow peeps, a product that somehow manages to taste as if it is made of 115% sugar, and turn it into three different fucking milk flavors.  You can get your instant diabetes diagnosis in either Marshmallow Milk, Chocolate Marshmallow Milk, and Easter Egg Nog, all of which sound abjectly horrifying.  Trying to flavor milk like fruit is weird, sure, but trying to say “we took a candy, and jammed it in milk for you” is something aliens do when they misunderstand how our taste buds work.  “You hu-mans enjoy marshmallows, and sugar, why do you not like marshmallow sugar sludge flavored dairy products?”

A lot of people don’t even like Marshmallow Peeps, because they basically taste like sticking your face in a bag of confectioner’s sugar, and though Peeps are sold year-round, with some almost depressing failed attempts to associate Peeps with holidays that don’t rhyme with “schmeaster”, there’s a reason why only really see people eating them in March and April.  Not that we’d think this idea of flavor was any better if Peeps were a year-round treat, we’re just saying that as far as semi-annually-popular flavors go, Peeps-flavored milk is only a slightly better idea than trying to make it taste like a fucking McRib.  Do not drink this. 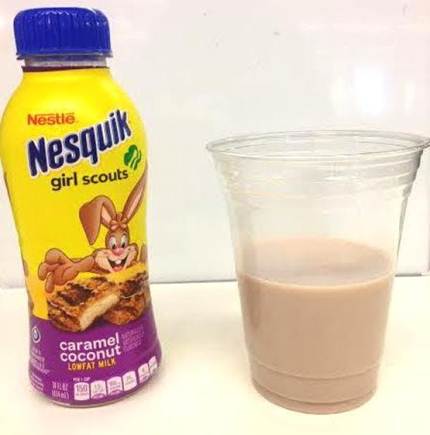 Because people like Girl Scouts cookies, and cookies are something you dip into milk, we can kind of understand the logic in place that would lead to Nesquik making Girl Scouts cookie flavored milk.  We can even tentatively get behind the thin mints flavor.  But look at that up there.  Caramel coconut.  Listen, we get it, Samoas are delicious so long as they’re not being ignorantly confused with a Polynesian ethnic group.  But caramel and coconut, as much as they go on a cookie, do not belong in milk.  Look at that glass up there, for God’s sake.  That’s not a healthy color for milk.  That’s like diluted chocolate milk that has a secret.  No one wants that.  Get that shit out of our faces, Nesquik.

The above image has two bottles that say “yummy!” and “tasty!” and are a color of milk that made the more nerdy among you geek out just a little bit.  But this is not yummy, nor is it tasty.  It is wrong.  This is the first of two entries taken up by the Shatto Milk Company, who have literally put the word “shat” in their fucking name.  They’re a small, family owned dairy farm from the Kansas City area, and unfortunate family name aside, they probably make very good milk.  They make very fresh, hormone-free milk, and if we were talking about their standard milk options, we’d be all for them.  But, apparently, they felt they had to gimmick things up just a bit to help them stand out in the crowded milk marketplace, so…well, so they give us cotton candy milk.  That is bright blue.  If you got this as a five year old child, you would be absolutely fucking delighted, but anyone older than that would be grossed out and, frankly, worried they might catch something.  This is literally the only milk label in the world that should have an “only appropriate for ages 0-5” label on it. 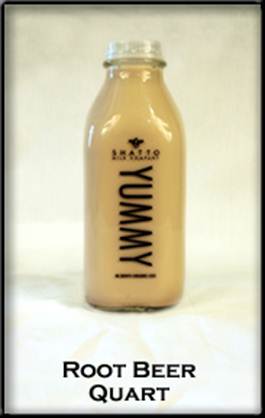 Shatto is back with this root beer flavor, which only makes sense if you think about root beer floats, and somehow find yourself equating vanilla flavored ice cream with milk flavored milk.  It makes absolutely no sense to the rest of us who have drank root beer in our lives, of whom roughly zero have responded by saying, “Hmm, this root beer is tasty, but if I poured some milk in this I think that’d take it to the next level.”  And you know what’s easily the worst part about this product?  It looks to the naked eye like it would be chocolate milk, and it says the flavor roughly zero places on the bottle.  Can you imagine being a child, coming home from school to see your mom or dad had picked up a quart of chocolate milk while you were gone, excitedly pouring yourself a glass, and freaking the fuck out when the chocolate milk tastes like root beer, which is a flavor and texture combination you’ve never encountered?  We’ve literally had that exact nightmare before.  This should come with a label demanding that parents are responsible for shouting, “JOHNNY JUST SO YOU KNOW THE MILK IS FLAVORED LIKE ROOT BEER THIS IS ROOT BEER MILK NOT CHOCOLATE MILK WHICH IS OF COURSE A NORMAL FLAVOR OF MILK” every time their child goes near the fridge for at least the first week after purchasing this.

This is a terrible idea.  This is borderline criminal.  Leave your milk alone, America.  If you’ve got to put anything in it, just stick with vodka and Kahlua and leave it at that, alright?