When you were a child, you’d look up at the stars and say, “Space is awesome!”  Now, when you look up at the stars, you’ll either say, “Space is fucking awesome!” or, most likely, “Make everything stop spinning, oh God I’m gonna be sick, I shouldn’t have had that last shot.”  And America, being awesome and having a particular interest in claiming awesome things for themselves, have never been shy about our aspirations to get out into the stars.  Adjusted for inflation, we’ve spent roughly $790 billion since NASA opened up shop in 1958, an amount of money commonly referred to as, “Shut up, stupid, that’s not too much money, space is awesome.”

From Alan Shepard’s first suborbital flight to Sandra Bullock’s conversation with an Inuit, Americans have done more in space than any other nation.  And while experiments, and feats of courage, and lunar travels are all well and good, there’s one thing we’re most concerned about.

What kinds of food have we shot out into space?

When we talk about food in Space, we don’t mean to talk about Space Food.  While we can’t deny the awesomeness of Space Food, as in, food designed specifically for consumption in space, that’s only because it’s made for space.  As a general rule, we’re going to like anything made for space, no matter how stupid it might otherwise be.  That’s why Tang had its moment in the sun (despite being invented about five years before John Glenn brought it up in Friendship 7).  If someone tells you, “This is what astronauts drink!” then you’d drink it, even if you have Buzz Aldrin tell you, in explicit terms, that it sucks.  And despite tasting like powdered mix mixed into Play-Doh, you’d still eat astronaut ice cream because it’s what the astronauts eat (admittedly, it was only used in one mission before everyone realized that it cracked into little bits, and “crumble shards” is the last thing you want from your food in space.)

And yes, the history of making food suitable for space, adapted for the unique difficulties that weightlessness provides is a fascinating and important topic, and we should probably talk about that.  We should mention the processes that go into making actual capital-S-capital-F Space Food, how spicy food is better received than milder fare, and the rigorous testing involved in processing nutritional and palpable food for astronauts.  We should write that article someday.  But not today.  Because today, we are going to tell you about real food that has been brought into space, food that probably shouldn’t go into space, but goddamn it we’re America and we do what we want, and what we want is some junk food. 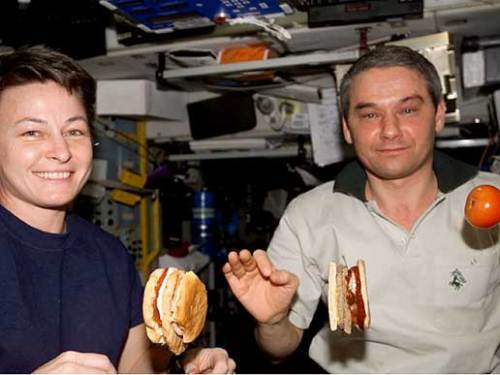 This one was specifically made by NASA itself, so it kind of totally goes against everything we said in the past few paragraphs about not including foods that were made for consumption in space, but we feel that this is an important exception.  All you need to know is, right there, we have hamburgers just, floating in space.  We’re sure the process to make a space-appropriate hamburger was arduous (NASA sadly doesn’t provide much detail about the ingredients or makeup of the hamburger, though it’s safe to say that the tomato in this image is primarily made out of, erm, tomato) and that just proves how much America needs its damn burgers.  That’s what we like to call “taking pride in our food.”

And if that’s not enough to warrant the hamburger’s inclusion in this list, here’s a video of a bunch of Harvard students sending a hamburger up into space using weather balloons.  Like we said, Americans are very serious about hamburgers belonging in space.

Now, we’ve talked about the concept of Space Beer before, in the form of Thirsty Swagman, of Australia, and their quest to sell $95,000 space flight packages that includes drinking the Vostok Space Beer, brewed by 4 Pines Brewing Company specifically to be better consumed in a zero-g environment.  That is still a few years away, meaning that Thirsty Swagman has plenty of time to reach out to America Fun Fact of the Day and offer us a free spaceflight.  You know, for journalistic purposes.  And not so we can smuggle a bottle of bourbon into space and puke it, just, everywhere, all over the instrument panels, dooming us all.

Thankfully, America made sure to win the beer race, and in a big way.  First of all we have the above image, which is taken from this video where a Natty Light was sent 90,000 feet in the air, probably because they figured you’d be better off sending a beer that no one would miss into space before sending a beer people actually want to drink, like how the Soviets would just pick up stray dogs and send them to die in space before putting humans up there.

Even more impressively, our government has actually sanctioned the brewing of beer in space, because an eleven-year-old child told us to.  You needn’t any further explanation of American tenacity than the fact that someone who is ten years away from legally being able to drink asked the government if it would be cool to send up a 6-inch-long tube of hops, water, yeast, and malted barley to see what would happen if we combined all them together and tried to turn it into booze in space.  That’s the greatest thing we can even possibly imagine at this moment, and that’s taking into account that we’re currently painting a picture of a tiger high-fiving Mohammed Ali on a velvet canvas with Prince shredding guitar in the background. 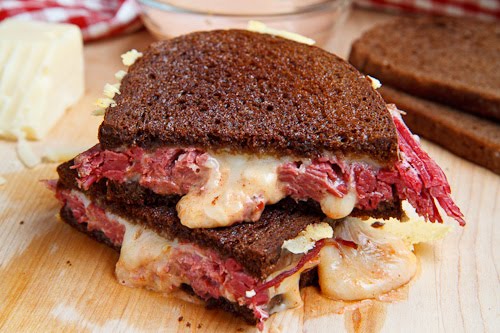 We’re particularly fond of this specific example because, far from simply tying something to a balloon and letting it drift off to the heavens, the first (and probably only) corned beef sandwich to make it to space was contraband.  As in, snuck aboard a spaceflight, resulting in official reprimands of the astronauts involved.  Specifically, during the Gemini 3 flight in 1965, John Young brought a corned beef sandwich with him for his space flight with Gus Grissom.  They each shared a few bites before the sandwich had to be stowed, since it began breaking apart and they didn’t want to risk any crumbs getting free and shorting out the equipment in the capsule.

As far as foods to bring up to space in blatant disregard of direct orders, you can do a lot worse than the corned beef sandwich.  We can only hope that, when confronted by his superiors about his corned beef stunt, Young drunkenly slurred something along the lines of, “I’ll smuggle my corned beef into your space, sir.”

When most astronauts are asked what they would like while in space, they might say something corny like, “To be able to achieve wonders of science” or something hopeful like, “I want to see my family again, please don’t let the Space Goblins devour me,” or they might say something true, such as, “I’d really like to have some fucking pizza.”  Naturally, we were on top of that shit.  It started out in 2001, when Pizza Hut became the first corporation to deliver a pizza to space (in this case, to the International Space Station), thus winning an imaginary space race that no other pizza chain was competing in.  They created a special made-for-space six-inch pizza that was covered in salami (pepperoni would spoil too soon) and shot up into space to be eaten by…Russian cosmonaut Yury Usachev?  What the hell, Pizza Hut?  You goddamn traitors!

Usachev gave the pizza a thumbs up, but how can we trust him?  A Russian on Earth would shrug and eat a pie filled with glass shards and say, “Well, at least I didn’t have to drive today.”  A Russian in space would probably eat a sandwich made out of tomato sauce and aluminum foil and declare it the best thing he’s ever eaten since his mother’s wheat fields started growing only rocks and weeds.  Anyway, Pizza Hut at least made Space Pizza, so that’s cool, we guess.

We’ve also had several people do the “put it on a weather balloon and send it to space” thing with their own pizza slices, which isn’t surprising as we’ve established by this point that if you give an American a camera and a weather balloon, they absolutely will stick something unhealthy to the end of that balloon and post the resulting space food video to youtube.  That might sound like an indictment, but really it’s the greatest compliment we can give about the American spirit.

Because more than anyone else, Americans clearly know how to do space right.