Halloween Costumes That Should Not Exist (Female Edition)

“Honestly, I just kind of feel sorry for the models.” 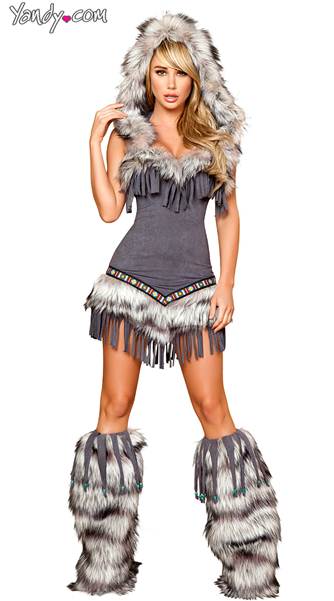 We talked to you earlier this week about Halloween costumes for men that, essentially, are crimes against humanity.  Now, it’s time for us to talk about the ladies, because AFFotD is a gender-equal institution, and also because all bad idea women’s Halloween costumes are, let’s say, revealing.  Which, you know, gets page hits.

That said, while the men’s article required multiple categories, you don’t need such nuanced distinction with the Halloween costumes that, we guess, in theory, someone has bought.  They have to have, right?  Anyway, while horrible men’s costumes covered a moderate range of awful ideas, today’s article adheres to just one basic theme.

Costumes That Should Not Exist (Female Edition)

There is a certain stereotype when it comes to women’s Halloween costumes—we like to call it the “sexy blank.”  The sexy cheerleader, the sexy football player, the sexy ballerina, you take a noun, and turn it sexy .  This isn’t body shaming, and this isn’t an observation of us seeing scantily clad Halloween revelers and saying “oh it’s a sexy blank” no, this is a self-acknowledged phenomenon.  “I’m dressed as a sexy librarian” the general statements go.  “I’m dressed as a sexy cancer patient, weird that I don’t have any friends, right?” the worst person at the party might say, for example.

For many, Halloween is a time to say, “Fuck societal judgment, I’m going to dress in something that makes me look good” and that’s really a boon for everyone.  It’s a self-esteem boost for the costume wearer, and stereotypical men might grunt and slug each other in the arm in agreement over the fact that boobs and legs and bare midriffs are all things that they enjoy.

Unfortunately, this often can go too far.  Too, too far.  How far?  How about…this far. 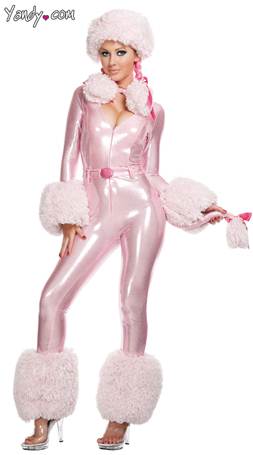 A lot, and we mean a lot of these costumes leave us uncomfortably asking, “Is…is this a fetish?  Like, are there people into this?  Or did it just become one with the creation of this costume?”  One of the problems with this is that all of these horrendous, terrifying costumes are extremely revealing, and as a result, they require a certain type of model.  As opposed to male costume models, who all look like complete doofuses in the most literal sense of the term, the women who put on these costumes are all very attractive women.  They’re models, naturally, but they’re models that you feel, in a just world, might be doing photo shoots for clothing ads or who might one day stand behind Drew Carey showing off a new car in The Price is Right.

Instead, these poor women have to cram themselves in skintight pink spandex with furry puffs around their ankles and wrists, awkwardly craning on clear stiletto heels while a bunch of half-drunk writers for some blog ask themselves, “Wait, is there such thing as a poodle fetish?  Please tell us there’s not.  Please tell us there aren’t people out there who want to fuck poodles.  Let’s Google it to make sure.  Oh God why did we google it we can never unsee what we have just seen oh God this article is the fucking worst and we’re only one costume into the damn thing.”  You know, something like that.

Her top has lights that flash on and off.  They spell out the words “Pho King Hot.”

This one is called Rocket Babe, presumably because they either didn’t want to pay royalties to Pixar, or they couldn’t find an appropriately sexual pun for Buzz Lightyear.  To be fair, the closest we can come to a pun for that would be “Fuzz, Not Here” which is actually just gross, and now we feel bad for typing that.  We’re in a dark place, people.  A really dark place.

Holy shit, the eyes.  Look at the eyes, people.  Just know, at some point in the process of either conceiving, making, or photographing the model in this costume, someone involved in the creation of this terror said, in the most sincere and creepy way possible, “I wanna fuck that jellyfish.”

PUBLIC SERVICE ANNOUNCEMENT:  Do not fuck jellyfish.  They will stink, and also, gross, and also, what did we get ourselves into when we decided to write this article.

This is called the “Galaxy Gremlin Costume” which pretty much confirms that they’re just avoiding paying royalties to franchises owned by Disney at this point.  You could have called this “Sexy Yoda” (which, ugh, why?  Why does the world need a sexy Yoda?  Why does a 900 year old wrinkled puppet need to be sexualized?) and it would have been a better name.  Plus, you probably would have maybe a handful of dudes who haven’t seen Star Wars and are like “heh, your costume is a Yoda!?” thinking that a Yoda is either the name of a part of the vagina they’re unfamiliar with, or is a pun on some clinical term, and either way, hey, you’ve established who not to talk to for the rest of the party.

Sexy Harry From Dumb and Dumber 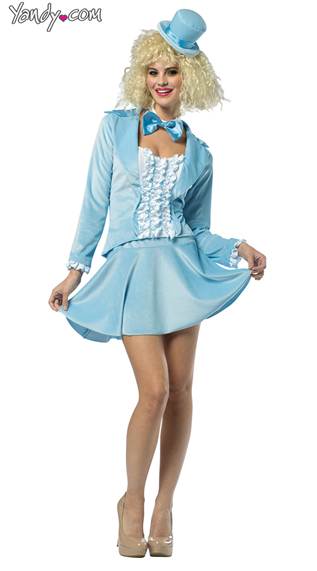 Our contributor who sent us this suggestion described the costume by saying, “I mean, this has to be a boner-killer, right?”  For reference sake, this contributor was a straight woman.  This is supposed to be Harry from Dumb and Dumber, and is actually advertised as such (Dumb and Dumber must not be the property of the Disney Corporation), but it’s such a weird mix of “attractive model” and “what the fuck is that hair and why and what.”

We’d actually feel pretty bad if that was her real hair.  Like, if we met the model in real life and said, “Hey, you’re a very attractive woman, it’s a shame they made you put on that wig in that photo shoot, it made you look goofy as all hell” and she responded with, “What wig?” and then we’d just feel sad, finish our drink, and leave.

Okay this is the part where we’re going to get off the ride.  Everything that they’re trying to make “sexy” in the previous are just things that are absurd, but a sexy baby is just terrifying in everything outside of episodes of 30 Rock.  We’re primarily concerned about how into it the model is in this picture.  She’s just looking right at you going, “Yeah.  I’m a baby.  You want to bang me.”  No madam, we don’t want to bang babies, why do you keep trying to get us to say that we do want to, wait, is that a wire that you’re wearing, are you recording this conversation, what’s the meaning of this!?

And Happy Halloween, everyone.

2 responses to “Halloween Costumes That Should Not Exist (Female Edition)”