The Most Expensive Vodkas in the World

“So you’re telling us that if we want to drink this vodka, we need to rob some banks?  Can’t we just drink some Skol instead?”

Everyone can appreciate a good bottle of vodka.  By that, of course, we mean to say that if you’re spending more than $25 on your vodka, you’re probably being suckered.  Vodka’s the most neutral spirit out there, its primary reason for existing is to give us a way to turn most “non-alcoholic drinks” into “mixers.”  If you like the taste of orange juice, but don’t like the sobriety it causes you?  Vodka that fucker up.  Have yourself a 60 oz. cup of one of those Mountain Dew flavors that’s blue and only available through Taco Bell?  Boom, add some vodka and suddenly that haphazardly folded together 1 lb. bean and potato burrito is the most delicious thing you’ve ever eaten.  Did you randomly find a glass filled with some unrecognizable liquid on the street corner?  Vodka would probably make it safe to drink.  Maybe?  Right?

And while most Americans find themselves unwilling to shell out for any vodka fancier than, say, Chopin, some people find themselves choose to spend excessive amounts of money on a flavorless spirit just so they can tell themselves that they’re important and relevant, no matter how many times their mistresses make fun of their distressingly small genitalia.  And for these Ferrari SUV driving individuals, we present…

The Most Expensive Vodkas in the World

While members of the AFFotD staff prefer a nice smooth craft vodka at a fair price, like the Texas distilled Tito’s, we admittedly don’t have Russian models at hand who we are trying to trick into fellating us.  But for those who think money is a way to show those around you that you are totally worth hanging out with (because you will always cover the bill), the following vodkas are exactly what the personal-doctor-on-exclusive-retainer ordered.

(Please note that the vodkas on this list only include vodkas where something unique was involved in making the alcohol.  If the bottle itself is just expensive, that doesn’t count.  So that means that the $7,200 Bear-shaped bottle of regular Belvedere doesn’t make the list.  Neither do the Swarovski-embedded bottles of $6,900 Oval vodka, $4,300 Iordanov vodka, or $2,000 Alize vodka.)

Just because your booze is meant to be smooth and, again we can’t stress this enough, flavorless doesn’t mean you can’t blindly throw away the average American’s monthly salary on a bottle of it.  Normally, Stolichnaya Elit would set you back a cool $50 bucks for a fifth.  While that’s more money than you should be spending on a vodka, you can pretend to justify the expenditure by reading all the praise their website gives you for your purchase.  “You are a connoisseur,” you are told.  “You won’t accept second best.  You Know Better.”

But apparently, you don’t know well enough to not waste your money on the Himalayan Edition of Stoli Elit.  Coming in a hand-blown glass bottle in a commemorative box that includes a solid gold icepick (because reasons), Stoli charges $3,000 for this bottle since, apparently, the water is super tasty.  Using an underground reservoir of water formed by melted Himalayan snow, and using wheat from the Tambov region in Russia, only 300 bottles of this vodka have been made, which means only 300 people will get to know what it’s like to spend 100 times more on a product than they should.  But hey, at least you get a 234 gram gold icepick with it.  Even though the website basically tells you, “For the love of God do not use the icepick on actual ice.”  Of course, if this isn’t gaudy enough for you, there’s always…

You know what’s supposed to be flavorless?  Vodka.  Sure, you can spot certain differences between brands, or the hints of change between potato and grain vodkas, but really, at the core of it, if your vodka doesn’t burn on the way down, it’s going to be pretty flavorless.  You know what else is flavorless?  Gold.  But that doesn’t stop us from turning it into flakes and eating it for dinner before going out to find someone at an Occupy Protest so you can figure out how much money it would take to make them abandon their principles and work for you as a personal servant.

With that intrepid spirit in mind, Vallure Vodka has decided that the best way to filter vodka was to run it through gold.  Because, of course, nothing is better at filtering out impurities like a soft metal that had to be mined out of dirt.  We can’t verify the science behind this, unfortunately, because when we googled, “How do you filter a bottle of vodka using gold?” the only result that came back was a picture of Sir Richard Branson doing a line of coke off the Hope Diamond while giving us the finger.

Vallure’s gold filtered vodka comes in a 24-karat-gold bottle, which means that somewhere out there, someone is going to accidentally throw away this bottle when it’s done and absolutely make the garbage man’s day.  Because when Americans flocked to the West Coast in 1849 to try to strike it rich in the gold rush, they all secretly dreamed that someday the gold that they found would be turned into a bottle of booze that’ll be placed prominently on a mantle of a Hedge Fund manager looking to point it out to the 22-year old “fashion student” he brought home on a second date.

But honestly, why filter with gold when you can put gold in the damn booze?

Royal Dragon Vodka is the most recent attempt to tap into the “liquor for people who can afford a trip into space” market, and they don’t fuck around.  They recently announced the release of 888 bottles of “The Emperor,” each bottle of which contains a hand blown grass dragon, and the bottle is crowned with an 18 karat gold pendant affixed with diamonds.  Apparently the makers of Royal Dragon Vodka want to go out of their way to make sure that, as soon as the bottle has been drunk, there is a chance that the purchaser will eventually be forced to fire and subsequently blacklist their housekeeper.

Besides from giving an inanimate bottle a piece of jewelry that’s nicer than any gift you will purchase for a significant other at any point in your life, the vodka itself is distilled five times, made from winter harvest rye, and infused with 23-karat gold edible leaves.  We can’t attest to how vodka with gold flakes floating around would taste, but if we ever manage to find a bottle of it, we’re pretty sure we could turn that booze into the prettiest looking vomit to ever ruin a state governor’s oriental rug.

As of now, the price of this is listed as, “If you have to ask, you can’t afford it,” so we have yet to try it.  We can’t say for certain that every time someone gets drunk Royal Dragon Vodka they close a factory in Ohio and refuse to offer severance to its workers.  Of course even the most ardent plutocrat might have a hard time affording the next vodkas. 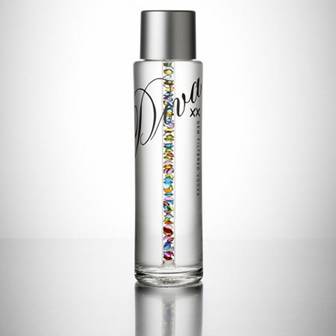 Diva Vodka is distilled in Scotland by Blackwood Distillers.  Like many vodkas, it’s filtered three times.  Unlike any other vodka, this includes being filtered through diamonds that have been ground into sand.  If that’s not ostentatious enough for you, it comes with a chauffeur you can shoot, and a contact on the police force who will make sure it goes down as an accidental discharge.  Oh, wait, sorry that’s…that’s something that…pretend you didn’t read that last part.  No, it comes with a rod that is filled with gems.  If you’re some sort of fucking plebeian you can shell out $3,700 for a bottle where the crystals are filled with Swarovski crystals, or you can drink like a goddamn man and spend $1,200,000 on one filled with diamonds and other gems.

When your vodka is so expensive that even winning Survivor won’t give you enough money to buy it, we’re thinking it’s pretty safe to say that you’re over-spending.  Just like… 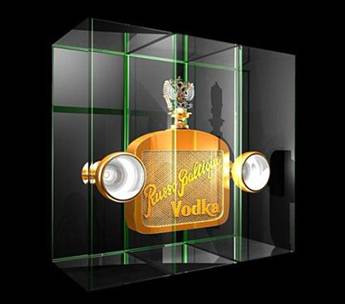 Did you know that car makers make liquor?  Well, in Russia they apparently do.  And apparently, when a Russian automaker decides to distill a vodka, they have to put it in a flask that is a replica of the radiator guard sued for their cars, made out of gold coins minted only between 1908 and 1912.  One can only assume they got these coins by robbing the coin collection of every grandparent in the entire country.  The flask’s cap contains a diamond-encrusted replica of the Russian Imperial Eagle, while the bottle is made of 12 inches of bulletproof glass ( which seems like a wildly unnecessary step.  Are things so bad in Russia that vodka bottle shootings are a common thing).

We’d ask how the vodka tastes, but they say it’s a “secret, super premium recipe” which probably is just code for “it’ll taste like Grey Goose no matter what we do, so let’s just distract everyone from that as we try to hawk this thing for more money than most people see in their entire lives.”

Yet, as absurd as this car company’s attempt to sell vodka is, it’s still not the most expensive vodka in the world.  That claim goes to… 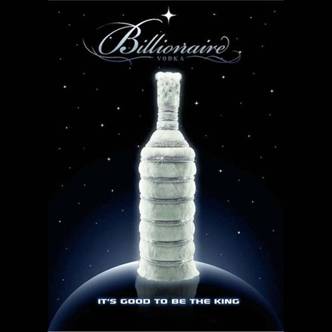 Well, it would only make sense that the bottle of this vodka would contain 3,000 diamonds.  And sure, it’s a five liter bottle of five-time distilled vodka that is filtered through millions of dollars of diamonds.  And a bottle of vodka costing more than a celebrity’s mansion is an impressive feat in itself.

But let’s just take a moment to appreciate the website for Billionaire Vodka.  Billionaire Vodka thinks that poor people are gross, but they don’t have to worry about that shit, because they’re rich.  To drive this point home, they decided to make a website that shows all the rich people stuff that they totally do all the time, in between taking sips of the most expensive vodka in the world (which they make sure to tell us time and time again).  When you go to the website, you’re treated to a commercial featuring…holy shit, Sylvester Stallone telling us about all of his super expensive things he owns?  What?

The rest of the homepage is just pictures of things that rich people apparently have.  This seems less like an effective way to drum up interest for this ridiculously priced vodka, and more like the Dream Board of a summer intern at Goldman Sachs.  We’re pretty sure they decided what images to put on the website by watching an episode of Family Feud and getting pictures of each of the top answers on the board.

Seriously, all of the following images come DIRECTLY from the website for Billionaire Vodka.  Look!  They have various fancy and expensive cars!  Just like rich people!

And airplanes!  And helicopters!  And boats!  And large bank account numbers! 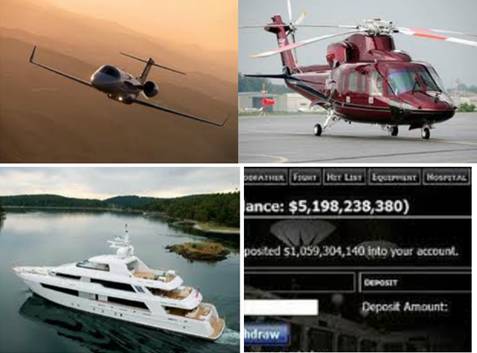 But hey, it’s not like they’re going to want to use all their money to make a non-mockable website.  No, they’re too busy with their yachts and their cars that are powered by the tears of people living below the poverty line.  That said, if Billionaire Vodka wanted to send us a bottle just to, you know, have us taste test it…hint?

14 responses to “The Most Expensive Vodkas in the World”