“Shit yes I enjoy those things, who the fuck do you think you’re talking to?”

What does America like in its entertainment?  Nudity?  Well yes.  But barring that, what else?  Action?  Adventure?  The very real chance that you could watch someone straight up die before your very eyes?  Goddamn right, this is America, we like our steaks heart-attacky, we want our bratwurst gummy-bear-y, and we prefer for our entertainment to be riddled with schadenfreude.  With the recent Chicago Air and Water Show seeing 1.7 million people flock to it despite stormy conditions, then, it only makes sense that Air Shows have a special place in America’s heart.

Because even when wing walkers fall to their death we’ll still watch the shit out of them, making it the second bloodiest sport in America to get millions of excited spectators (next to football, of course).  So that’s why we’re here to celebrate the pointless recklessness that is… Air Shows. 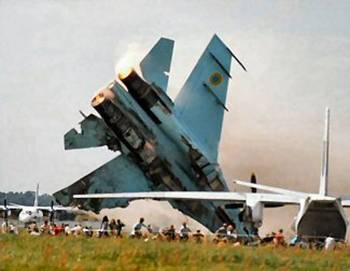 Did you know that there are air shows that are called “Static Air Shows” and involve no flying or aerobatics, and just center around people walking around and looking at a bunch of landed planes?  Of course you fucking didn’t, because you’re an American and you have been trained to ignore things that go out of their way to take away the awesomeness of the best things in life.  Fuck Static Air Shows.  A real air show involves people flying giant, expensive pieces of fabricated steel that flaunt our conquering of God’s divinely placed limitations, doing flips and shit, and occasionally crashing worse than Evel Knievel’s liver donor.

Air Shows have changed throughout history as flight technology has gone from “quaint” to “holyshitballs my ears are bleeding.”  When America decided to let the world in on the secret of flight, no one expected how quickly technology would be developed.  It took thousands of years to develop the ability to fly, and once we did that it took 30 years to go from “propellers” to “motherfucking jet engines.”  As a result, while the first “Air Shows” were actually long distance aerial races that spanned over several days and thousands of miles, once we reached the point where our planes could go “BOOOOM” by flying overhead while shitting out smoke, the idea of “plane races you can only see several seconds of” got replaced by “let’s have people walk on wings as planes zoom around each other and nearly crash into each other.”  Every time a major city hosts an Air Show, an Air Traffic Controller’s head explodes.

Air shows can be very dangerous, not only for the pilots of the planes, but sometimes for the spectators themselves.  Since this is America we choose to remain blissfully unaware of any such dangers, though a lot of that has to do with the fact that the deadliest Air Show accident didn’t take place in America at all- it took place in the goddamn Ukraine.  And as a general rule, as far as “disasters” go, if it happens in the Ukraine, the American version of it will be a lot less of a big deal.

No discussion of Air Shows can be complete without discussing the Blue Angels, a squadron of American badasses known as, alternately, “The Coolest Thing in the Navy” and “Those guys in blue jumpsuits that were on that episode of Home Improvement once.”  Formed in 1946 as a way to boost morale, they now fly F-18 fighter jets that are 72 hours away from being combat ready.  The only difference between the Blue Angels’ planes and ones we could use in war is the paint job, and the fact that the guns are replaced by canisters that shoot out colored smoke.

During the Korean War, due to a shortage of pilots and planes, the Blue Angels were actually decommissioned for a short period, and they formed the core of a squadron known as the “Satan’s Kittens” which is the most badass name we’ve heard all week.  They have flown nine different kinds of planes in their existence and you’ve stopped caring a while ago, haven’t you?  You just want to see some more pictures of planes flying?  Like this?

There.  We know, sooo cool.  Some places that are by large lakes combine Air Shows with Boat Shows, making Air and Water Shows.  These are also incredibly American, incredibly crowded, and events that are best if you are incredibly drunk.  However, with an Air and Water Show, the “water” part is fairly redundant because no one gives a shit about the boats.  They might as well call it “An Air Show that takes place over water instead of over a field, oh and a stealth bomber is going to go near the speed of sound and fly right over you so you don’t hear it coming until the loud ‘BOOM’ sound knocks you on your ass”…uh…Show.

Either way, Air Shows are a great place to go to down a beer or seven and laugh when your kid starts crying because it’s way too loud.  And in that sense, it is a gloriously American institution.  We invented flight, goddamn, we have the right to abuse the shit out of it.

One response to “Air Shows: Americanly Crazy, or Just American?”