Annoying songs from the 60’s aside, we at America Fun Fact of the Day do enjoy sugar (sugar).  Though not so much the honey (honey).  Candy is delicious, gives you a brief sugar high, and can be turned into a stripper’s name simply by replacing the letter “y” with an “I”.  And one candy is a true American staple, created by the Civil War (seriously).  That’s right, over-eager Americans who already clicked that link, today’s Fun Fact is about the incredible, edible, delicious, nutritious, neat treat: the Jelly Bean.

As previously mentioned, the Jelly Bean was invented during the American Civil War, an era of American History which was a lot of fun for everyone who didn’t understand what dying means and who liked to see large amounts of names listed in newspapers.  Originally created using a mixture of bloodied dirt from battle fields and lead-based paint, the first Jelly Beans were red, tasted awful, and led to the creation of Hepatitis.  When the inventor of the Jelly Beans, Johannas “No Taste Buds” Johnson passed away in a totally-not-Jelly-Bean-related-manner after eating a heaping handful of Jelly Beans, the Jelly Bean business was taken over by Johannas’ 8 year old son, Artie.  Artie Johnson always thought Jelly Beans tasted too much like blood and dirt, so he decided to alter the ingredients.

Given that he was an 8 year old child, Artie replaced the “Blood of fallen soldiers” ingredient with just a whole shit-ton of sugar.  Unaware of any of the many existing non-toxic food coloring agents, he kept using lead paint as a coloring ingredient, since he was 8 years old and years, and in the throes of a pretty bad case of lead poisoning.  Jelly Beans were modestly successful for a time, and when Artie succumbed to a totally-not-Jelly-Bean-related death after competing in a Jelly Bean eating competition at the age of 22, a conglomeration of candy confectioners began tinkering with the recipe, first replacing the lead paint with mercury, until finally settling on starch and food dye. 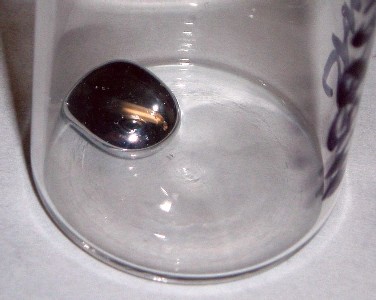 Though mercury was a close second.

Jelly Beans have many uses.  While they have their place in Easter Baskets and in small glass jars left on the desks of office workers starved for human interaction (“If I have jelly beans, maybe someone will talk to me?  Please?”), Jelly Beans have a storied history of being used in Macgyver like situations.  In fact, much like Jack Bauer, 007, and the Smurfs, Jelly Beans have saved America (and the world) on numerous occasions, including…

1823–  After a massive earthquake nearly severs California from the rest of the nation, Californian residents stuff the San Andreas Fault with a combination of chewed and whole Jelly Beans, creating a Jelly Bean adhesive that to this day ensures that California stays attached to America.  If you were wondering, most of the Jelly Beans were the green flavor.

1943–  Baron Von Murderbot, a notorious criminal mastermind and Jelly Bean aficionado who had just received a large grant from the Evil Everybody League (EEL), builds the first dialysis machine instead of his proposed Murder Ray after succumbing to diabetes.

1972–  President Nixon gives Soviet leader Leonid Brezhnev a Jelly Bean figurine with googly-eyes that says “Have a deliiiiiiicious day” when you press a button on it.  While insignificant at the time, two years later, when Brezhnev was set to launch a nuclear strike against the East Coast of the United States, he first looked at the doe-eyed figurine.  He stared at it wistfully, while in his head an innocent tinker from a child’s toy piano played in his head, and he decided against firing the missiles.

1989– The Berlin wall comes down when a giant Jelly Bean falls on it, effectively killing communism right in the death.

2006– Al Davis, owner of the Oakland Raiders, is killed when a Jelly Bean lodges in his throat.  He is replaced by animatronics, but his death derailed his plan to purchase and destroy every team in the National Football League as the first phase of his fiendish ten part plan to plunge all of America into mindless Anarchy.  (Phase seven involved killing all the ponies in the world.  All of the ponies.)

2010– While hungry, the America Fun Fact of the Day staff eats several handfuls of Jelly Beans, declaring that “oh, these are tasty.”

Many presidents have a well founded love of Jelly Beans as well, and it is a little known fact that Ronald Reagan was actually ¼ Jelly Bean (his paternal grandfather was one of the living, viable, human sized Jelly Bean that was manufactured for a very brief period in the in the 1899s, which were discontinued when they kept seducing and impregnating women with freakish Jelly Bean spawn).  President Gerald Ford had a pet Jelly Bean that would get bullied by his pet rock, but he liked the pet Jelly Bean better, and named it Beaner.  And JFK was well known for taking Jelly Bean baths, which is why he always smelled so goddamn delicious.

Jelly Beans have a long and storied history of importance to America and Americans alike.  They continue to evolve to this day, and scientists predict that in one hundred years, Jelly Beans will be seven feet tall and will sport a luscious head of edible hair.  So, we can all look forward to that.

And since America Fun Fact of the Day will not be circulating tomorrow, due to a severe case of “Flying to New York”, if you take the right cocktail of hallucinogenic drugs and buy a bag of Jelly Beans, they’ll probably tell you humorously outlandish but true stories about America while we are gone.*

*America Fun Fact of the Day is in no way responsible if it’s readers take a dangerous cocktail of drugs and harm themselves, others, or their careers.

This entry was posted in America's Best Foods. Bookmark the permalink.

One response to “Jelly Beans, America’s Substitute For Legumes”