“We can only hope that someday, a law will come that will be more idiotic than this law which we are trying to pass.”

~Every member of the Temperance Movement

We live in a society of rules and laws, but we exist as a society that would prefer to ignore the ones we don’t agree with.  And generally, law enforcement officers don’t care about the laws that we ignore, unless outdated definitions of brothels are involved, but even then Americans just find a way around it.  The fact is, many laws have been enacted in this fine land over the past 130 plus years (wait…2011 minus 1776 is…yeah that sounds about right) and not all of them aged particularly well.  But, instead of replacing them, we leave them on the books so that they can just stare at us, looking silly, watching us laugh at them.  Sorta like Andy Kaufman.

You had us at that one time you said that thing with the funny accent.

Since the AFFotD office has a running “felony” pool, we like to track some of the more obscure laws in the land for when we want to add something to our list of committed crimes, while avoiding most legal repercussions.  Maybe the way we keep score for our  “Who committed the most crimes” today game is faulty, but technically manslaughter is worth as many points as getting a fish drunk in Ohio.  So that’s why we’re here to each and every American heart out there the ways that they’ve been breaking the law, without even realizing it, in today’s edition of… 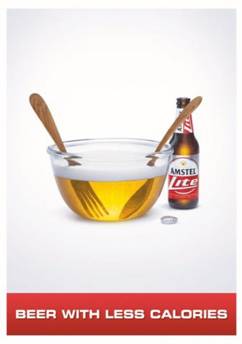 In a legal move that is more “confusing” than it is “efficient”, the state of Nebraska has a law on the books stating that it is illegal for a bar to serve beer unless they are simultaneously brewing a kettle of soup.  We’re not sure if that’s just because some Nebraska lawmaker had a strong affinity for the actually-even-better-tasting-than-it-sounds-and-it-sounds-really-fucking-good Guinness and Cheddar Soup, or if the Campbell’s lobbyists had a really good foothold in this state, but either way this is both the best and the worst idea we’ve ever heard for an alcohol serving establishment.  Because, think about it.  Soup is fucking delicious.  But it’s also very hot.  So ensuring that everyone getting drunk in a public location is in immediate access to scalding hot liquids strikes us as the biggest danger to the modern drinker since Glassing became really popular in the UK.

9.       Illinois Knows What’s Amrrrrican Goddamn it, and They Speak it.

Illinois is one of the only states in America that states it is illegal to speak English.  Though we’ve previously explained that Illinois loves making things unnecessarily giant for the glory of America, we didn’t realize how deep their American roots run.  You see, according to a 1920s Illinois Law, instead of speaking English, you are legally required to speak American.

That’s just the most beautiful thing we’ve ever heard in our damn lives.  The reasoning behind this was, “Fuck you, England, why’s our language gotta be named after you?”  We’re not sure how this law can be enforced- our best bet would be that anytime someone says the word “Lorry” police stop them and ask if they were referring to a person (acceptable!) or a truck (arrest that man!).  Or maybe if someone says the words “herbs” with a hard H, they’ll find themselves duct taped to a chair like that one cop in Reservoir Dogs.  We honestly have no idea, all that we know is that this is the best thing ever.

8.       Groucho Marx is NOT Allowed in Alabama Churches 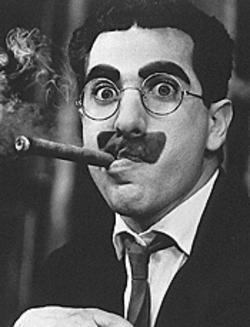 An Alabama law states that it is illegal to wear a fake mustache, in church, if it causes someone to laugh.  Thankfully, the law does not dictate that fake mustaches outside of church are illegal, nor is it illegal to wear one of those lame, boring, non-hilarious fake mustaches to church.  Also, you are allowed to make someone laugh by wearing comically oversized Long Johns, or by trying to put on a denim jacket that’s sized for a toddler.  The law is vague on their views on real-life hilarious facial hair, or on false beards, sideburns, or really, any non-mustache false facial hair item.  Needless to say, AFFotD staffers break this law all the time. 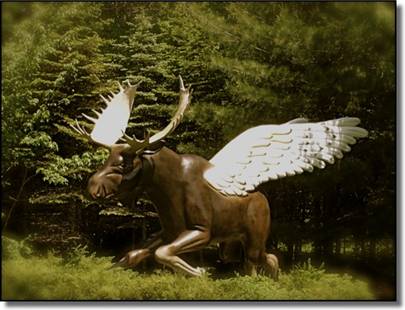 Alaska, who we used to think were our partners in our “Fuck Nature” campaign, has a law expressly banning an American from pushing a moose out of an airplane.  Actually, we’re not going to make any snide remarks on this one.  This one really pisses us off.  If we can’t push a moose out of an airplane, what can we push out of an airplane?  A box of ferrets?  Deer?  Keanu Reeves in Point Break?  Keep your damn government regulations out of our planes, Alaska!  Plus, you’re not allowed to get a moose drunk, which again…the fuck, Alaska? 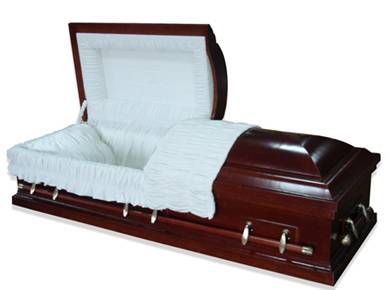