The American History of Teddy Roosevelt

While America has produced its fair share of mutant supermen, only one of the nation’s past presidents was actually allergic to electricity, due to the metallic nature of his testicles.  A man who once cut another man in half by blinking at him.  A man who didn’t like Spaghetti because it was “Too Italian”, so he only subsided on hamburgers and his enemies’ fears.  That man of course, is Theodore Roosevelt. 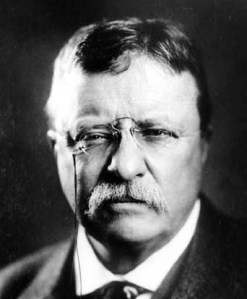 Theodore Roosevelt, who was such a badass he felt absolutely no insecurity about people calling him “Teddy”, was invented on October 27, 1858.  On that day, American scientists, after much research, invented Teddy Roosevelt, who burst from his mother’s womb smoking a cigar, chugging a bottle of bourbon, and dragging a bear carcass.  Roosevelt’s mother was permanently scarred from the ordeal, and went on to invent the Caesarian section.  Many historians speculate that somehow, a fetal Teddy Roosevelt lured a full grown bear into his mother’s womb, which is how he was able to kill and stuff the bear before taking it out with him as he walked out of his mother’s birth canal (yes, he walked out of there).  Roosevelt’s prenatal use of formaldehyde to preserve his trophy bear gave him a case of asthma as a child, which he eventually cured with a unique case of being Teddy Roosevelt.  To this day, a vial of Roosevelt’s blood is used to create all asthma medication. 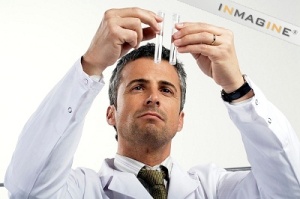 After attending Harvard, Roosevelt became increasingly frustrated with the fact that he was not allowed to kill people on his horse, following the passage of the controversial “Teddy Roosevelt is not allowed to kill people on his horse” law of 1870.  In 1895, Roosevelt decided to serve as the commissioner of the New York Police Department, hoping he’d be allowed to “accidentally” shoot a perp.  Crime went down 1200% in his two years serving, while police-related-punk-shootings went up a whopping 5000%.  President Grover Cleveland personally had to go to New York, informing Roosevelt that he was “A loose cannon” and “out of control” before taking his badge and gun and informing him he was “off the case.”  Disgruntled by these turns of events, Roosevelt went west, rounded up a bunch of cowboys, and formed the Rough Riders Brigade to kill some Spaniards and Cubans. 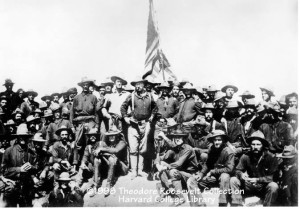 How much more America can you fit in one shot?

Teddy Roosevelt was the first American to ever “shotgun” a beer.  This feat occurred during the charging of Kettle Hill in 1898, when Roosevelt grew thirsty from killing so many damned Cubans.  Taking his canteen of beer (Theodore Roosevelt never in his life drank water or milk, having been weaned on a bottle of whisky as an infant), Roosevelt threw it in the air, fired a shotgun at it, and immediately chugged the beer that sprang from the bullet holes.  Screaming, “Holy shit, that was awesome,” an excited and slightly buzzed Teddy Roosevelt burned down most of Southern Cuba in celebration, ending the war and inspiring college students everywhere.

In 1901, Roosevelt was the vice-president to President McKinley.  When McKinley was shot on September 6 of that year, Roosevelt, who regularly shot himself in the leg because it would tickle him just a little bit, failed to realize that Mckinley was roughly 1/17th of the man Teddy Roosevelt was.  As a result, Roosevelt assumed the President would recover within several hours (Roosevelt’s wounds tended to heal fully after about three shots of bourbon), so Roosevelt left for a vacation with his family.  No, seriously.

Next time you get the flu…think about Teddy Roosevelt

During his presidency, Roosevelt spent a lot of time dealing with Japan, where Roosevelt got to see the budding of the strange Japanese freak porn scene firsthand.  He also invented Oklahoma, making it the 46th state of America.  Roosevelt decided against running for a second re-election in 1908, supporting President Taft, before deciding, “fuck it”, and running against Taft and Woodrow Wilson in the 1912 election.  Roosevelt created his own political party, but was still the second leading vote getter in the election, though he did eventually lose to Woodrow “I wish I were half as cool as Teddy Roosevelt” Wilson.  Many believe that the reason Roosevelt failed to win the election stemmed from one single incident.

While giving a campaign speech, a man in the audience shot Roosevelt in the chest.  Roosevelt, thinking he may have been stung by a sickly bee, continued his speech uninterrupted.  No, seriously.

Political pundits speculate that at that point, Americans realized they didn’t deserve such a statue of awesomeness to be their president.  Roosevelt spent the next 7 years riding across the nation on his horse before World War I broke out.  When word of the war reached Roosevelt, the former president, now 60 years old, immediately rode his horse across the Atlantic ocean and curb-stomped the Kaiser, ending the war.  Roosevelt did a fist pump, shouted “Boo-ya!” and turned into stone to take his rightful place on Mount Rushmore.  And no one questioned it.

Even in granite form, his Americanness is GLORIOUS

10 responses to “The American History of Teddy Roosevelt”