A Delicious History of Steak

“Oh my God, this steak is so good I can taste it’s soul.”

There’s an old story that we at the America Fun Fact of the Day offices like to tell to really amp us up.  And by “old story” we mean “a heritage myth we stole from some Indians and tinkered with, because, you know, America.”  It talks of the Bear and the Cow.  The Bear was the most feared animal in the forest, able to rule the forest mercilessly, this being before the existence of C. Dale Petersen.  All animals fled his path, and hunters to him were like hot dogs inside orange-vest hot dog buns.  Brother Bear knew no fear, and had never experienced pain.  Then, one day, there was a cow stampede in the forest.  These fat cows, lumbering, came in such great numbers that Bear had to climb a tree to evade them, only to look down in despair to see his youngest cub directly in the path of the oncoming bovine charge (Bear was sort of a shitty parent, to be fair).  Right as the Bear grimaced, preparing for the death of his child, Brother Cow stopped in his tracks, directly in front of Bear’s cub.  The rest of the herd ambled past, and when the dust settled, Cow stood in front of the cub, and in his mouth was a blade of grass, which he gave to the cub.  Brother Bear was so relieved that he climbed down, and said to Brother Cow, “You have saved my own dearest child.  Thank you, Cow, you truly are a noble creature.”

Brother Bear and his cub then ate the shit out of that Cow, because steak is fucking delicious. 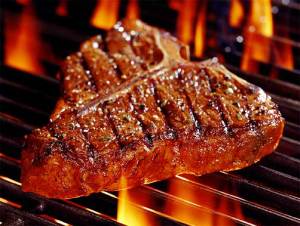 Today’s America Fun Fact of the Day is about Steak, a delicious food, national pastime, and very convenient excuse to clear rainforest land to cultivate cow grazing fields (because fuck nature).  The mere existence of Steak is something we Americans take for granted.  Oh, we appreciate the tender meat, the explosion of flavor, the red releasing from around the knife’s first incision of a perfectly medium rare steak helping satiate both our hunger and our relentless blood lust.  We marvel as steakhouses bring giant hunks of meat from even larger animals while charging a massive fee.  We don’t really understand why corn-bred Iowa beef is better, but goddamn it we know it is.

And really, steak is the one food that can take something as ruthlessly ugly as this. 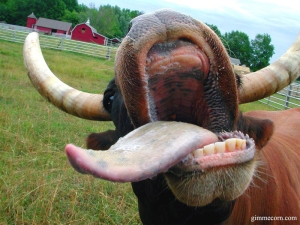 And make it look delicious just by telling you what part of its body will be hacked out and put on a plate for you. 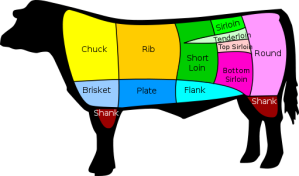 Steak, which derives its name for the Old Norse word for roast, “steik,” when served the proper, American way (Fuck you, French assholes, French fries are for hamburgers, NOT for steaks) comes with a starch, usually a baked potato, and some vegetables, usually slathered in butter, like a corn-on-the-cob, because vegetables should not be consumed without being made unhealthy somehow.  A dinner roll should be served with an American steak, and ideally, it should be consumed on a plate made out of PETA protest signs.

Steaks may be served at a variety of different temperatures.  Here they are listed in the order, from highest to lowest, of their Americannessnessness. 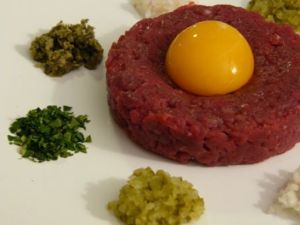 –          Steak Tartar:  The most American of steaks, Steak Tartar combines all the weight loss (see also: tapeworm) properties of uncooked meat, with the destruction of potential life only found with a raw egg.  Rocky Balboa taught America that eggs, when consumed raw, make you a champion boxer.  Therefore, Steak Tartar makes you a champion American boxer, and makes you impervious to most forms of witchcraft, which is a nice plus.  Plus, nothing says, “Go ahead, mother nature, give me your best shot” like eating raw meat and raw eggs.  Nothing. 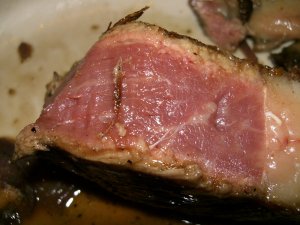 –          Rare:  Not only can you really savor the flavor of a rare steak, the blood dripping out of a hunk of meat that is brown on the outside but cool and red on the inside, but you ensure that you will get one of the best cuts of meat at the restaurant where you order it, due to a fear of another great American pastime- frivolous lawsuits.  As a bonus, if you grab a properly sized rare steak, you can pretend to do that scene from Temple of Doom when motherfucker ate that guy’s heart. 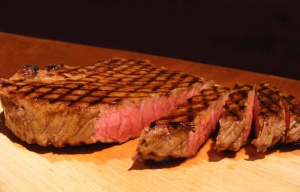 –          Medium-Rare:  The preferred choice of Americans who actually want to know what their meat tastes like.  While not nearly as bloody and patriotic as a rare steak, it’s still a perfectly acceptable substitute for those who have less blood lust that needs satiation.  Dexter Morgan, for example, only needs to eat a Medium-Rare steak after a kill.

–          Medium:  This is the steak of choice for members of the American Socialist party who donate to worthwhile charities, and for cops who write parking tickets.  They don’t really know what they stand for, and while they don’t feel totally American, they don’t feel un-American either.  They live their lives in a perpetual existentialist crisis, which they show through their reluctance to order a steak that is American with the potential of awesome stomach parasites that you can name and befriend, but American enough to avoid the terrifying Canadian-like “Well-Done” steak (see below).  Some restaurants that are too afraid of the quality of their meat force their customers to eat steak cooked to this identity-crisis creating temperature.  I’m not saying T.G.I. Friday’s is un- American, but did you know that their Jack Daniels sauce cannot get you drunk?  The shit is that? 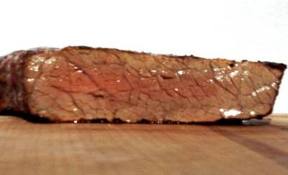 –          Medium-Well:  Wikipedia claims that the middle of a Medium-Well steak is “light pink surrounding the center.”  That’s bullshit, get that shit out of my face.  If we wanted to eat “light pink” steak we’d only hit on women at the Breast Cancer Walk for a Cure rallies.  We don’t even know what that sexual analogy is supposed to mean, that’s how much the concept of a Medium-Well cooked steak infuriates us.  This is a steak that’s meant to be ordered by Americans who have never had alcohol touch the lining of their stomach, and if that’s the case you better be under 17 or under 21 and socially awkward.  If you order a Medium-Well steak at a restaurant, it is customary for the chef to make a nice horseradish-reduction sauce and use it to spell out, “YOU ARE A PUSSY” on the top of your steak. 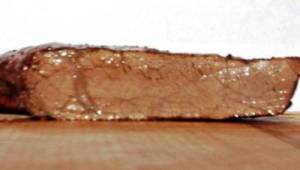 –          Well-Done:  Oh mother of God, what have you done?  This once glorious slab of dead animal has been defiled by your evil, paranoid ways.  Every time you order a Well-Done steak at a restaurant, the chef gets on the phone with the House Committee on Un-American Activities, and has the steak plead the fifth amendment in regards to your Communist ties.  The meat is “dark throughout and slightly bitter,” which translates to, “What were you thinking?”  A Well-Done steak is such a travesty and a waste that when you eat it, the ghosts of slaughtered cows haunt you for the rest of your life going, “Why!?  Why!?  We died for nothing!”  Chefs will use their worst cuts of meat for Well-Done steaks, because you can’t taste the difference.  That’s a fact.  Ordering a Well-Done steak is like getting a French Bistro’s famous chocolate soufflé, waiting 30 minutes after your meal for it to be prepared, and then cutting off your tongue before digging in.  You get no enjoyment out of it, and it’s even painful to the people watching it happen.  In a deleted scene of the film, It’s a Wonderful Life, Clarence informs George that, “Every time someone orders a Well-Done steak, an angel has to put a puppy in a shredder.”  Terrorists don’t even eat their steak Well-Done, because deep down, they all secretly yearn for freedom.

Steak is the fuel of America (except for Vegetarians, who have to find America substitutes and American activities to make up for the levels of American they lose from not eating steak.  Usual examples include Free Climbing, consumption of cannabis, and roller derbies).  And we mean that literally, cows are responsible for like, 20% of the world’s greenhouse gasses, and are part of our ongoing war with planet Earth.  Without Steak, the Irish would have so many potatoes lying around without a damn clue what to do with them.  We all someday hope to be able to eat a 72 ounce steak in one sitting, and if we can’t achieve that, we at least want to meet that one fat trucker whose picture is on the steakhouse’s wall of fame.  So tonight, sit down with a nice porterhouse (or, for the non-meat eaters of our readership, develop a cool Roller Derby name, like Cinderhella) and take a bite…into freedom.

16 responses to “A Delicious History of Steak”