~One of Four Check Boxes on Medical Forms Under “Reason For Heart Attack.” 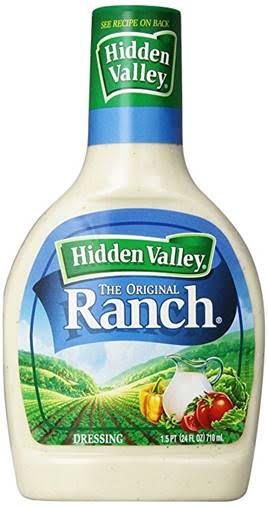 Ranch dressing claims to be one of the, if not the only, truly American salad dressing. We do not dispute this. No, seriously, we’ve written to that effect and everything. Hidden Valley, a ranch in California, originally invented the creamy gluttonous delicacy in the 50s before selling the brand to Clorox for $8 million in 1972. You’d think that Ranch sells itself, but the folks behind Hidden Valley apparently disagree. Today, Hidden Valley Ranch sells about half a billion dollars’ worth of product a year, but in order to keep things fresh, they’ve been rolling out some, oh, let’s say “interesting” marketing gimmicks. You’ve probably heard about some of them. But not all. So we compiled the rest of them here for you. Because we don’t know about you, but when we think of Ranch dressing, we definitely think “gold, gem-encrusted bottle.” Or we do now, apparently.