When Americans are asked what they want to smell like, they tend to respond with slightly worried silence.  We understand that, it’s weird.  It’s personal.  And there’s no way to answer the question without sharing far more about yourself than you’d otherwise be comfortable doing.  If you say you want to smell “like rose and cinnamon” you probably are somewhat feminine and prefer sweet breakfasts over savory ones.  If you say you prefer the smell of axe body spray, you’re a douchebag.  If you respond by saying, “I want to smell like ropes and pepper spray,” uh, Jesus Christ you’re a kidnapper aren’t you?  Holy shit, you totally are.  You totally are.

So we’re not here to ask America what it wants to smell like.  We’d like to guess bourbon and cigar smoke, but maybe that’s just the optimist in us.  We’d at least feel pretty confident saying that “like General Patton” would be pretty low on most people’s list.

But the joke’s on you, because not only is there cologne that smells like General Patton, but there’s a whole line of colognes meant to smell like each branch of the American Military!  Because gimmicks are the only reason why we buy anything! 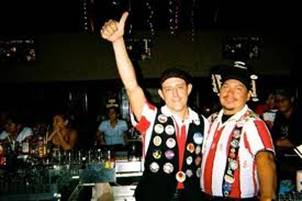 Which actually helps explain the popularity of T.G.I. Fridays.