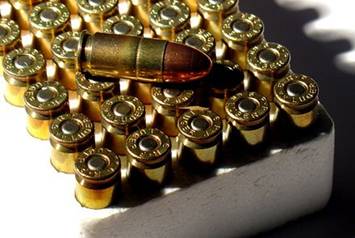 America knows how to do vengeance pretty well.  Sure, England burned down our White House, but we helped shut down their longest running newspaper.  Yeah, Japan sneak attacked us at Pearl Harbor, but…you know…boom.  Once we figured out how much of a scam Columbia Record Club was, we ran those bastards out of business.  The point is, America loves getting even almost as much as it loves fatty food, and lord knows how America loves its fatty food.  In fact, if there’s only one thing that overshadows our insatiable revenge-fueled blood lust, it’s our pure-insanity driven invention ideas.

Now, we don’t talk about guns a lot here, because normally we’re busy eating double cheeseburgers, and we’re legally prohibited from discussing certain grease related accidental gun discharges until the judge sets a court date.  But, guns are extremely exciting for most Americans, and are even better than alcohol at artificially inflating your self-esteem.

We’re not gun nuts or anything, we just want to point out that Die Hard would have been a lot less exciting if Bruce Willis was using mace or a tazer or something.  Which is why our interest was piqued when we saw the perfect insane American invention that takes all the confidence building of guns, all the craziness of most of our inventions, and combines the two to scoop out delicious ladles-full of vengeance.

What we’re trying to say is…some glorious bastards in Alabama decided to make bullets out of dead people.