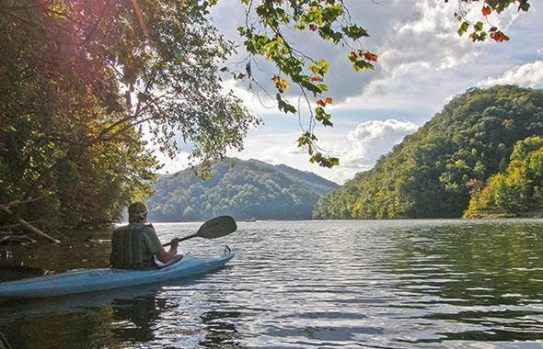 Sometimes, Democracy doesn’t work quite the way we want it to. It’s both one of the greatest, and most frustrating, aspects of the system. Democracy doesn’t always get it “right” but, at the very least, it allows us to eventually correct our mistakes.

Case in point—alcohol. As much as we drink to forget, a generation of Americans couldn’t legally buy booze for thirteen years, despite the fact that we’re pretty sure the best parts of the Constitution were written when James Madison was half in the bag.

But we also eventually came to our senses, and now you can drink in most places except for random pockets of the country that we’d never want to ever go to. That’s why, after 2018 elections, we are proud to announce that, at long last…

Situated in Eastern Kentucky, Buckhorn Lake State Resort Park encompasses 850 acres around a 1,200 acre reservoir lake. The lake is good for swimming, canoeing and boating, while fishermen can find a large population of muskie for angling. There’s a 36-room lodge, three cabins for rent, and you can take elk viewing tours. All of these are things that our staff can actually do now, because, finally…

You can buy alcohol at Buckhorn State Resort Park!

While Americans were voting on Senators and Representatives this past November, 310 people in Kentucky got together to vote on what really mattered. Can you sell alcohol in Buckhorn State Resort Park? Shockingly, 155 of those people are not Americans (traitors!? Russians!? Teetotalers!?) because they voted against this measure. But 155 brave patriots went out to the polls, and through their courage and sacrifice, managed to get just enough votes for this sleepy town to determine the measure in the least Democratic way possible—through the blind luck of a coin flip.

Alright George, do  you want to be a hero or a villain?

Now in American history, there have been a number of elections determined by flipping a coin. In Kentucky alone this year, two other races had to be determined by the flip of a coin. 2018 also saw a tied Sherriff’s race in Clay County, Alabama (after a recount, each candidate gained one more vote, maintaining the tie (Republican Jim Studdard eventually won the flip).

In 2006, the Democratic Primary for the Alaska House of Representatives was determined the same way (the coin they used was specially made, with a walrus on one side and the seal of Alaska on the other, which is very Peak Alaska). A city council seat in Kentucky (which, we should add, specifically dictates that ties are to be broken with a coin flip) ended the same way. And in 1990, in the House race for the 55th district, an initial recount led to a coin flip which was later nullified by the Illinois Supreme Court.

All this is to say, it’s extremely rare, but not unheard of, for an election to be determined by a coin flip. Hell, a random drawing (not a coin flip, but still) determined what party ended up controlling the Virginia House of Delegates this year. But those elections don’t hold a candle to this coin flip, arguably the most important coin flip in Kentucky history.

And so a board of election member flipped a coin on Thursday, November 8th, 2018. Heads, and you can sell and purchase alcohol at Buckhorn Lake State Park. Tails, and the cowards would win yet again.

Naturally, this was the only possible outcome. Once fate got her trickster mitts on the situation, we knew that the right thing was going to happen. And it did.

You can now buy alcohol at the Buckhorn State Resort Park. And we now know where we’re going for our next staff retreat. God Bless Democracy, and God Bless America.