The Most Popular Baby Names For American Boys in 2017 (Are So, So Stupid) 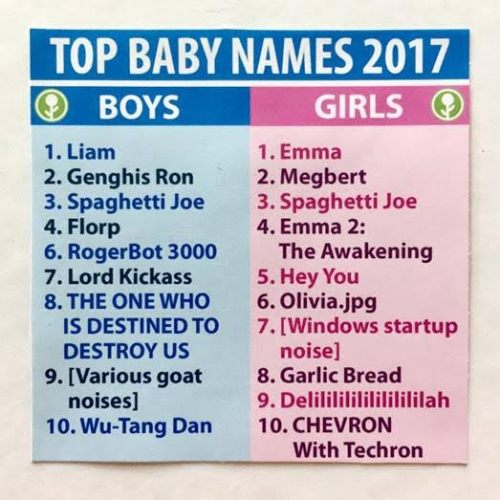 So we decided to go through a list of the most popular baby names for boys in America in 2017 as of this writing (November, 2017) as listed by babycenter.com.

It seems like we don’t have exact numbers on the most popular names yet, since there are about a dozen baby sites that claim to have their own accurate ranking, but this ranking is close enough that we can drive home our conclusion—there are a lot of babies out there with stupid-as-shit names.

Stop doing this, parents!  America is going to spend their grade school years in so many headlocks.

But anyway, here is a list of names that are currently more popular in America than good, normal, American names.  May God have mercy on our souls.

The Most Popular Baby Names For American Boys in 2017 (Are So, So Stupid) 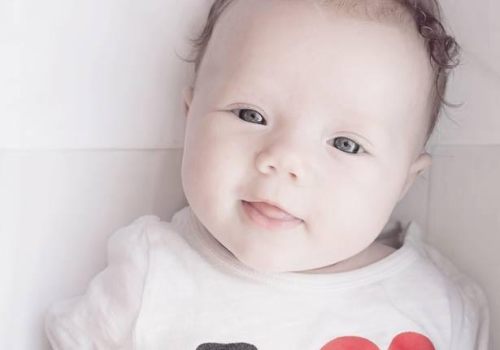 Sorry, Brayden, your parents put you in a kind of shit spot, didn’t they?

The way this article is going to work is pretty simple. We took a look at the 350 most popular baby names, for boys, so far in 2017, and we picked out ones that are, like, really dumb. Then, to drive home how dumb they are, we also selected a few relatively normal names that belong to people who did not get made fun of for their name all their lives, just so we can really emphasize how many better options there are out there. Because, woof, we’re starting to get really bad at naming American babies.

So here’s a fun trivia fact—Will Smith has been in four different movies where either his character’s full name, or part of his character’s name, is in the movie title. There’s Hancock, Hitch, The Legend of Bagger Vance, and Wild Wild West.

Now, you’re probably thinking of Will Smith movies while reading this, and you might snap your fingers and go, “Ah ha, no, that’s wrong, because he also was in I Am Legend.”

And we would say, nope, sorry dumbass, his name isn’t Legend in that movie, because Legend is a profoundly dumb name for a living human being.

Not Kyle. Kyler. Like, more Kyle. We’re pretty sure this only exists because parents saw all the Tylers and Skylers putzing around and decided they wanted their kids to be those insufferable kids who only hangs out in groups of people with rhyming names.

Okay, goddamn it, we can’t believe we have to say this, but, like, please don’t name infants after gun manufacturers? Yes, we know that Colt is a moderately acceptable name in some parts of the country, but you can at least pretend that’s something else. Remington is really bad, and really dumb. “Oh, this is Remington, his older brother SmithAndWesson, his younger brother Beretta, and of course his sister, Glock.”

At least you can go by Max, but, fuck, why would you do this to a baby? Like, how many parents are out there like, “I once made out in a movie theater watching Gladiator and it really was a defining moment for my teenage years.” Babies come out shriveled and screaming, they’re literally the least intimidating things ever, who has the fucking ego to look at one of those and go, “Oh hell yeah, look at that badass. Got just the name for him.  Yup. Maximus.”

Little. Little. Naming your child “Little” should absolutely count as child abuse. That’s so awful. We’re pretty sure that, legally, you’re not allowed to name your kid “Dumbass” or “WillBeBadAtFucking” so why is it fair that thousands of American children came into the world this year who have to suffer through a childhood being known as “Little”? That name only works out well for you if it’s your mob nickname, and even then you’re still probably going to end up getting murdered. Ugh, this is so mean.

Listen, guys, we looked the other way when y’all were out there naming your kids Jesus, but if you’re actually going to name your kid like he’s the second coming you better be at peace with the fact that you gave your child a horrendous first name with the very clear and obvious hope that it would bring on the goddamn rapture.

Karter. With a K.

We want to fight someone.

First of all, no child should go through public school with a name that rhymes with “Face” they are going to suffer so horribly. But then again, if you’re naming your kid Jayce there is a 100% chance he’s going to private school, an 80% chance he joins the lacrosse team, and a 30% chance he at least knows a guy who can get you roofies with 12 hours’ notice.

We feel that naming your kid after the bad guy from Blade Runner (or Sons of Anarchy if you’re nasty) is a bad idea, but what do we know? We’ve never had children and given them shitty, weird names.

That is not a person’s name. That is a name for a fancy dog, or an expensive car. A living human being named Bentley has only one career option, and that’s “Robot Butler.”

No, stop it parents, you can’t just go around naming your kids after Top Gun characters. That’s what pets are for. We swear to God, we actually went through this list one more time just to make sure that “Goose” and “Iceman” didn’t appear, because nothing would surprise us at this point.

Easton is a logo you expect to see on expensive Little League baseball bats. That’s just as bad as naming your kid…okay, well we were going to say Wilson but that’s a common and mildly normal name. Let’s go with LouisvilleSluggers.  Yeah that’ll work.

Even more infuriating is the fact that Jaxson, with an s as well as a fucking x, is #70 on this list, ahead of Max and Nicholas. Burn it all to the ground.

With Gray son comes gray responsibilities. But no, fuck this name.

Aiden is not the worst name on this list, but it’s still extremely distressing that this is one of the 10 most common boys names in America. We’re not saying Aidens are soft, but we are saying that Aiden is a soft name, and you have to work like hell to avoid ending up being a guy who like, wears seashell necklaces for a good ten years longer than socially acceptable.

If you’re wondering, the top five most common names, gulp, Liam, Noah, Lucas, Logan, and Mason. That is 100% the exact lineup of a struggling boyband on their fourth year doing the Orlando-area mall circuit. There are going to be a lot of insufferably named Americans in 20 years, folks. Hold onto your pants.

3 responses to “The Most Popular Baby Names For American Boys in 2017 (Are So, So Stupid)”