We, as in America, as a nation, are dicks to trees. It’s totally their fault, standing there all majestic and in our way.  Not even moving when they see fires.

Trees are dumbasses, and we shouldn’t mourn them. That’s at least what we tell ourselves, to make us feel better about that whole “we are dicks to trees” thing.

So how much of dicks are we to trees? Well, the oldest known tree lives in the White Mountains. It was measured by Tom Harlan, a researcher at the Laboratory of Tree-Ring Research at the University of Arizona, in 2012.

That tree is, as of the writing of this article, 5,066 years old.  And we are such dicks to trees that, out of fear that we’d destroy it out of pure delightful spite, Harlan straight up wouldn’t tell anyone where it was.

And guess what?  Harlan died the following year, possibly taking his secret to his grave (okay realistically it was recorded at the Laboratory of Tree-Ring Research, but it feels cooler to pretend that this 5,000 year old tree is hidden in a random forest like nature’s Ark of the Covenant).

There is a non-zero chance that this tree has since been killed by some dumbass hiker, or some man-made forest fire, because this is America dammit, and we’re real good at killing things.

No, seriously.  Three of the oldest trees to have ever graced this planet since the dawn of man have been destroyed by good old American know-how.  Let’s talk about dead trees.

Trees are pretty crazy, if you take a moment to sit back and think about it. They’re practically ageless, continually produce leaves and nuts and sometimes fruit, and can’t even run away a little when we go to chop them down to grind up their corpses to make sheets of tissue paper to wipe our asses.

Trees can, and do, die of natural causes, but their sedentary lifestyle allows for a much longer lifespan than your typical…well anything else on the planet. In fact, we’ve discovered dozens of trees that were alive during the Roman Empire, which is crazy to think about.

We also have killed three of them. Which is even crazier to think about. Here are three trees that were older than Christ before Americans put them out of their leafy misery.

Mother of the Forest 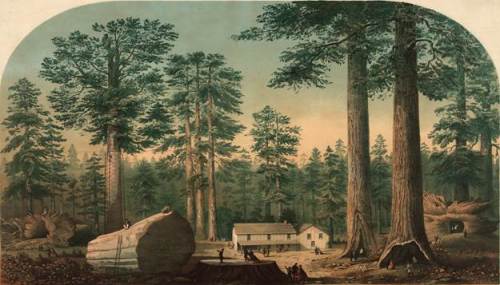 While we’re still pretty dumb (and dickish) to trees, in the mid-19th century we were actively idiots (and dicks) to them. Honestly, the best thing to ever happen to trees was the internet, since bored people now don’t have to do the kind of shit that ended up killing the Mother of the Forest, a 328 foot tall sequoia that lived in the Sierra Nevada Mountains from 667 BC until 1854 when it came down with a fatal case of “interested dumb gold miners.”

See, back before the television, or readily available pornography, it was very popular to take down huge trees and transport them to big cities as entertainment. Seriously, people had so little to do back then that they were limited to “die of dysentery” and “gawk at a giant cut-down tree” as their sources of distraction.

The Mother of the Forest, which was later given the name The Big Stump (we’ll give you one fucking guess why), was the oldest tree (that we know of) to suffer at the hands of these bored 19th century Americans, but we didn’t even do it the service of cutting it down.

Instead, because again back in 1854 we were jackasses, 60 tons of bark was removed over the course of 90 days, which would eventually be reassembled at exhibitions. So not only were people spending time (and money!) just staring at giant dead trees back then, but this particular tree was just a hollow tube of bark, glued together for city folk.  That’s absurd.

The thing with bark is that it’s kind of like a tree’s skin, and as we learned in the movie Se7en, if you take off someone’s skin, they can survive for a little bit, but they’re going to die.  Sure enough, by the end of the 1850s, the tree no longer grew foliage and was essentially dead.

Some planned on turning the tree corpse into a tourist attraction, with a staircase carved into it, but that fell through, until finally much of the remainder of the tree was destroyed in 1908 by a fire (a fire it would have survived if, you know, it had its fucking bark.)

This story did actually cause a bit of an uproar, because as much as we are dicks to trees, Americans appreciate old things, and get kind of pissed off when old things are killed for stupid reasons.

In the aftermath of the death of the Mother of the Forest, a lot of regulations were passed and the section of sequoias where the burned remnants of the tree can be found was conserved, eventually to become a state park.

Now, for all our talk about “we’re so awful to trees” we want to take a moment to say that we totally support cutting down trees. We have it on good (made up) authority that trees are racist.

This article isn’t about “saving the trees” so much as it’s about “calling out people for being idiots, who happened to do so by killing historic trees.” But now that we’re clear on that, here’s the next tree on our list that, surprise, was also killed in a stupid way by stupid people.

The Senator was a 125 foot tall bald cypress tree located in the originally-named Big Tree Park in Longwood Florida. Even though it was surrounded by swamp, people often would go through impressive lengths to see the tree before a walkway was eventually built.

Interestingly, The Senator almost died through no fault of any American back in 1925. That was the year that hurricane swept through and destroyed the top of the tree, lopping off nearly 50 feet of its original height. Still, it persevered much like it had since roughly 1500 BC.

That is, until 2012 when a 26-year-old Florida woman accidentally burned it to the fucking ground. Now, it’s one thing to burn down a tree that was 1,500 years old at the time Christ walked the world.

It’s quite another thing to do so because you accidentally set a fire while doing meth. For those of you doing the math at home, The Senator survived 3,500, as well as being crippled by a hurricane. But apparently none of that is as powerful as meth.

Meth-kills more than just your teeth and relationships.

But the oldest tree ever killed by an American occurred in arguably the dumbest way imaginable, simply because we should have known better.

Prometheus was a bristlecone pine that stood at around 20 feet. It also was a tree that was nearly 5,000 years old when it was cut down. It had been discovered in the 1950s, though no one was quite sure how old it was at the time.

And here’s where the impressive stupidity comes to play. A graduate student named Donald Rusk Currey was trying to get a core sample of the tree, and his corer got stuck.  So, he had a helpful park ranger chop the tree down.

It wasn’t until examining the now very dead tree that Currey discovered he had chopped down the oldest living single organism to have ever been discovered on the planet.

Currey would go on to have a pretty successful career before passing away at the age of 70 from non-tree related causes, but he was always known as “that jackass who cut down the oldest tree in the world.” That is no longer the case, since the tree that Tom Harlan discovered and then decided to not tell us where it was proved to break that record. But then again, knowing how we are such dicks to trees, that’s probably been killed too.

This entry was posted in America Fun Fact of the Day, Fuck Nature, Strange America and tagged America, Fuck Nature, Mother of the Forest, Old Trees, Prometheus, The Senator, Trees. Bookmark the permalink.