Most history curriculums are pretty bad at telling us about the crazy things that have actually happened in the world, if you think about it.  Sure, McCarthyism during the Cold War is “something we should know” but how come no one talks about the time we tried to build a military base on the moon in 1959? Hell, even when history tries to get edgy (like, for instance, the existence of Teddy Roosevelt) it somehow manages to leave out some of the best parts (like how his daughter was a pet-snake keeping badass).

This goes double for the history of baseball. We know about Babe Ruth and his philandering, boozy ways, but we don’t know about the pure insanity that was Charlie Sweeney. Likewise, everyone and their mother knows at least the name “Cy Young” when it comes to pitchers, but was Cy Young an alcoholic who once was struck by lightning during a game that he stayed in and finished?  We didn’t think so.

So we here at America Fun Fact of the Day have decided to do history a favor and help them spice things up a bit by telling you a little bit about Ray Caldwell, one of the most badass pitchers to ever play professional baseball, and one of the few people who can give Charlie Sweeney a run for his money.

Ray Caldwell’s career was both impressive and underwhelming, mired with shutouts, suspensions, and errant lightning bolts. He started in the first ever game at Fenway Park, was the very specific reason why manager Frank Chance resigned from the Yankees, hit a home run in three straight games (the first pitcher to ever achieve that feat), and once had Ty Cobb threaten to “cut [his] damn legs off” after Caldwell started throwing at the famed batter’s feet just to fuck with him.

He also was married four times, arrested for grand larceny and, as we’ve said before and will say plenty times more, was struck by lightning during an actual baseball game. He’s basically our favorite baseball player, is what we’re trying to say.

Ray “Slim” Caldwell was born on April 26th, 1888 in a Pennsylvania town that essentially doesn’t exist anymore after being flooded during the construction of a nearby dam. He didn’t play baseball professionally until 1910 at the age of 22 when he joined the New York Highlanders as a young spitballer (yes, he threw that pitch that’s now so illegal sports movies make jokes about it), who later changed their name to the “Yankees” who you might have heard of.

He quickly became their number 2 starter, getting 14 wins to go with a respectable 3.35 ERA, but he quickly set himself as one of the best hitting pitchers in the league, batting .272 with 17 RBIs. The 6 foot 2, 190 pound pitcher soon got the nickname of “slim” due to his teammates being very unoriginal about nicknames, and he was soon being dubbed “the second Matty” in reference to the great ballplayer Christy Mathewson, because lazily trying to compare young players to GOATs has been around longer than Michael Jordan, apparently. 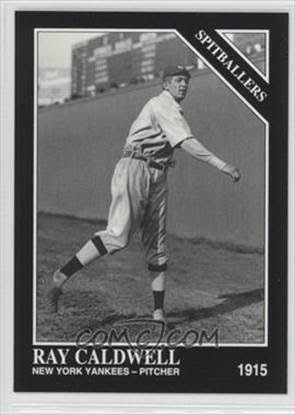 Caldwell’s play suffered due to injuries his next year, but his attitude, depending on who you asked, either suffered with it, or turned awesome. We say that because Caldwell began what would turn out to be a long lifetime of heavy drinking and womanizing during this time.

He felt something pop in his shoulder during a June 7th game, and instead of working on rehabbing and attending games and practices, he simply showed up when he felt like it, and skipped road trips to go drinking when he felt like it. That netted him a nifty $250 fine and a suspension, though he came back with a few shutouts when he was finally allowed to pitch again.

He struggled with arm troubles until 1914, when he went 17-9 with a 1.94 ERA and established himself as the ace of the perennially underachieving Yankees. He also used that season to embrace his debauchery, as he would often follow losses up with periods of “getting drunk and skipping team meetings.”

This did not sit well with Frank Chance, the legendary Cubs manager who had been signed by the Yankees in 1913.  Chance was kind of a hardass, and regularly fined Caldwell whenever he decided it wasn’t “convenient” to be sober enough to make a team meeting.

But at the time, Caldwell was an ace, and the fines were looking to be enough to drive him to leave the team and join the Federalist League, so the owners shrugged and said, “Eh, you don’t have to worry about those fines. This was pretty much the most succinct way to say, “You don’t have the final say on this team, World-Series-winning and future-hall-of-fame player/manager Frank Chance” so Chance quit the team in 1914 almost entirely because of Caldwell.

After the 1914 season, Caldwell was a star. He had been offered a huge contract by the Yankees, had proven to be more important to the team’s owners than his own manager, and a poem had even been written about him called, inventively, Caldwell, The Guy Called Slim.

This is also when management turned down an offer to straight up trade Caldwell for Walter Johnson, one of the greatest to ever play the game. They would probably go on to regret turning that deal down, as 1914 was Caldwell’s best season by far, and Walter Johnson led the league in wins 4 more times in the following 13 seasons he would go on to play, but hindsight is 20/20, and when you have a choice between the reigning MVP and a pitcher who liked to get drunk and skip practice, you clearly go with the drunk.

1915 saw a typical Caldwell season. He won 19 games with a sub-3 ERA, he did that whole “a pitcher hitting three home runs in three consecutive games” thing (the first two were pitch hit at bats), and presumably got wasted after each loss, though he managed to avoid getting suspended this time around (though he did get kicked out of a game by throwing his glove in the air, objecting to an umpire’s call).

But the important thing was that he won ballgames. He did not have that luxury in 1916, when his star began to fade.  He went 5-12 that season, taking multiple “breaks” including one long enough that The Sporting News (incorrectly, probably) reported that Caldwell had entered alcohol treatment, while there were reports of him pitching under an alias in Panama over the spring. Fans openly questioned why the team was paying him such an inordinate amount of money (his salary was about $9,000, which is the equivalent of $212,000 today). 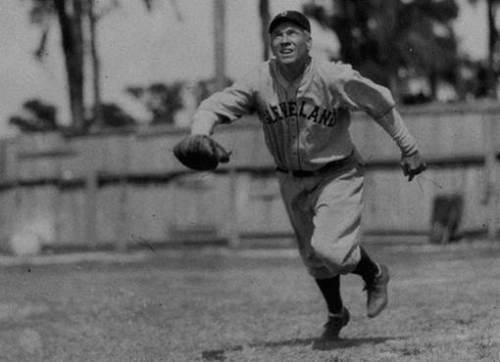 Caldwell showed up a week late for spring training the next season, which saw more drunken debauchery and fines. He was knocked for $100 and suspended for 10 days in June for taking a teammate out, missing curfew, and straight up not showing up to the field the next day. He followed up his suspension in the most Ray Caldwell way imaginable.

He entered a game in relief to pitch 9 and 2/3 scoreless innings to earn a win against the St. Louis Browns, and then that very night got arrested and charged with grand larceny for stealing a $150 ring from a St. Louis woman named Lucy Dick (stop giggling).

Charges were dropped when he returned the ring, but we have to wonder why someone who was making a healthy amount of money would decide to try to rob a rich woman of a diamond ring (just kidding, we don’t have to wonder at all, it’s clearly because he was drunk and thought it would be hilarious). That wasn’t the only time he found himself in court that season- he also was sued for alimony after abandoning his ex-wife and son.

The following year was shortened due to World War I, though Caldwell was able to avoid the draft by joining a shipbuilding company that allowed him to still play baseball during the season.

He pitched well, though not spectacularly, and the Yankees decided to part ways with the troublesome pitcher by trading him to the Red Sox, who released him in July of 1919 after a poor start.  He was soon picked up by the Cleveland Indians.  It was there that he was struck by lightning, his most famous act.

Having pitched 8 and 2/3 innings of a 2-1 ballgame against the Philadelphia Athletics on August 24th, 1919, out of nowhere a bolt of lightning stuck Caldwell and knocked him unconscious.

While a mere mortal like you or Arnold Schwarzenegger would have “asked to go to the hospital” or “flat out fucking died” in that situation, once Caldwell regained consciousness he waved off the manager and pitched the final out to finish his complete game victory. We’re not saying that Ray Caldwell is more of a man than anyone you know because we’re pretty sure Ray Caldwell transcends masculinity and created a new measure of badassness simply called “Caldwellity.”

This did not end Caldwell’s career—he still would pitch two more seasons, including in 1920 where he had one of his best yet. He possibly received some assistance by Major League Baseball, who that year decided to ban spitballs among all pitchers except for a select list of 17, including Ray Caldwell.

So Caldwell legally had the right to use an illegal pitch, but that’s not even the best part about his 1920 season. It has been written, and oh God how we hope it’s true, that Caldwell’s 1920 contract included a clause that specifically required Caldwell to get drunk after every game he pitched. If you’re thinking “that’s the best contract clause I’ve ever seen” we’re not even done yet.

He not only was supposed to get drunk, he was supposed to get so drunk that he would not report to the clubhouse the next day. In the ensuing days he was meant to run laps, throw batting practice, and finally pitch a game before starting his cycle all over again.

This sounds crazy, and it is, but it’s even crazier that it worked.  Caldwell went 20-10 that season (his only 20 win season) and though he pitched only 1 game in the World Series that year (a loss) the Indians took home the championship. But at this point, his stuff was not the same as it used to be.

He was moved to the bullpen in 1921, and that would be his last season in the major leagues, though he did spend the next 12 seasons bouncing around the minors. After marrying his fourth wife, and taking on her four stepchildren, Caldwell eventually stepped away from the game (though he pitched until he was 45) and settled into a job where he got a job at the Rod and Gun Club and, naturally, tended bar.

Despite his roughhouse lifestyle and, you know, getting hit by lightning that one time, he still lived a long life, passing away in 1967 at the age of 79. Honestly, that’s one of the most impressive things about Caldwell, if you ask us. So remember, next time you see a pitcher take a line drive to the shin and have to leave the game, you’re totally allowed to call them a pansy, at least in comparison to Ray Caldwell, the alcoholic superhero of starting pitchers.

One response to “Ray Caldwell: The Alcoholic Lightning Rod of Major League Baseball”