Swamp Thing, as a comic book character, struggles to find things to do that are actually relevant to, you know, those of us who are not horribly burned part-plant-part-human hybrids, since his main motivation is “stopping people from fucking with the swamp he lives in” which, on the scale of things, seems pretty small. That’s like, one episode of Captain Planet worth of plot there. How many people are out there trying to fuck up swamps? Because we’re pretty sure it’s definitely not 72 episodes worth of people.

Swamp Thing was first released as a serious-in-tone movie in 1982 written and directed by Wes Craven, starring actor/stuntman Dick Durock (it’s pretty worrisome when your lead actor has to have a clarifying slash in their name).

In 1989,  Dick Durock returned to the role for a campier sequel where he gets to fuck Heather Locklear, and we are so, so sorry that we aren’t joking. Return of the Swamp Thing made a whopping $192,000 in the box office (no, that’s not a typo) which apparently  warranted giving Dick Durock’s portrayal of the creature it’s own television treatment, where the actor/stuntman worked twelve hour days, six days a week, for 50 episodes straight without any time off.

We’re pretty sure that labor laws were created as a result of this show.  Swamp Thing tried to match the light and campy tone of the sequel, most notably by introducing Jim Kipp, a young 11-year-old boy created to appeal to younger audiences. But after 12 episodes, they decided that they wanted to be dark and gritty and serious so they removed that character in the most logical way possible—by having a South American child stealing ring kidnap the kid, after which point he was promptly never mentioned a-fucking-gain.

Holy shit, you guys. Swamp Thing got intense. We need to cleanse the pallet with something that, you know, doesn’t involve child endangerment. 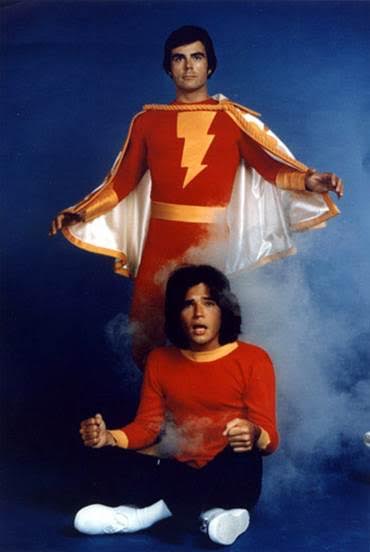 Unfortunately, Shazam! is almost entirely centered around child endangerment. It’s a completely not-sketchy story all of us can relate to. Who hasn’t, as a young boy, traveled the country with an old man in a Winnebago who keeps telling him how special he really is?  We’re not exaggerating any of that, by the way.

Listen, before we go any further, do yourself a favor, and watch the intro to Shazam! that we just linked to above the picture.  Let that just wash over you.  People should not have been trusted to make TV shows in the 70s.

Shazam!, which along with another questionable superhero show made up, and we’re not making this up, The Shazam!/Isis Hour, is the story of Billy Batson, a teenage boy who can transform into a superhero named Captain Marvel by simply saying the word “Shazam.” (Since the writing of this article it has since been turned into a “despite all the odds, pretty good” movie by D.C. Comics.)

He travels the country with his guardian, named Mentor, in a motor home “looking for injustices to resolve.” Yes. The old man he travels with is only given the name of “Mentor.”

Captain Marvel gets his powers from Solomon, Hercules, Atlas, Zeus, Achilles, and Mercury which means that a combination of Roman Gods, Greek Gods, Greek heroes, and…the king that wanted to cut a baby in half in the bible decided to give some teenager in a very questionable living situation superhuman powers so long as he quotes Tyrone Biggums.

The best thing about this show is that it was mentioned in an episode of Archer one time.  The worst thing about it is that it taught a generation of children that if a strange old man asks you into his van, it’s probably to tell you that you have super powers. 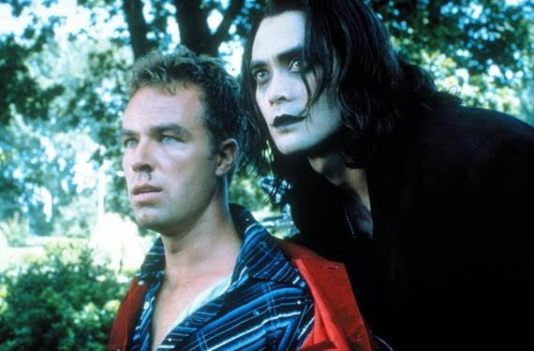 The Crow was a 1994 film based off a 1989 comic book that is best remembered for the fact that its star, Brandon Lee, the son of Bruce Lee, died during filming due to a defective blank in a prop gun. Which is honestly pretty grim.

But it was a dark, moody film about revenge and black lipstick which garnered a cult status especially among Goths. It was pretty well received, made about double its initial budget in theaters, and actually has ended up aging impressively well. So naturally, four years later, they decided they should turn it into a TV show starring that dude from Iron Chef.

The plot mirrors that of the film—Eric Draven and his fiancé, Shelly Webster, are brutally murdered. Eric returns from the Land of the Dead one year after his death, neither living nor dead, with regenerative powers and super strength, determined to get revenge and reunite with his lost love, who is unwilling to move on to the Land of the Dead without him. You know, your typical meet cute.

The TV show decides that Eric Draven needs more backstory, so he’s made the lead guitarist for a band called Hangman’s Joke, because sure, why the fuck not. That’s why they call it Stairway to Heaven. Get it? Because they’re trying to go to Heaven, but also, it’s that song?  Get it!?

The show only lasted one season, and also proved that we shouldn’t be making TV shows or movies about The Crow, because the subject material is clearly cursed. While we established how Brandon Lee died in the filming of the movie, the TV show got to see one of their stuntman get fucking killed by flying debris during a special effects explosion going wrong. Holy shit. Um…we’re not going to talk anymore about this, out of fear for our safety. 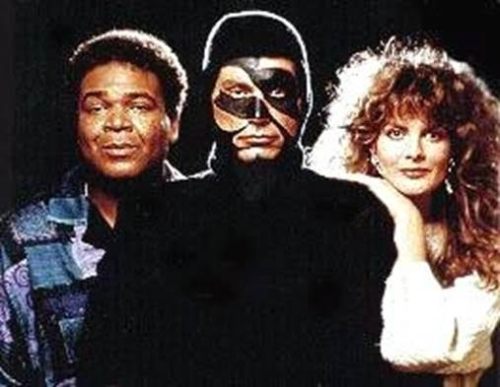 When a superhero has a secret identity, they usually try to come up with something that, ideally, can be useful in concert with his role as a crime fighter. Peter Parker masqueraded as Spider-man’s photographer to get rent money, Matt Murdock’s work as a lawyer put him close to criminal elements he’d fight as Daredevil, and Jon Sable, from the comic book Jon Sable: Freelance supports his mercenary/vigilante career by taking up a day job as…a children’s book writer?

What the actual what?

Sable only lasted seven episodes of its convoluted “mercenary for hire, out for revenge” plot. But, there was one thing that made it truly spectacular…The pilot was originally filmed with… Gene Simmons from KISS as Jon Sable!

And the only reason that we don’t live in a world where Gene Simmons played a shitty comic book hero on a shitty TV show is that the ad execs thought he looked too pudgy for TV, so they hired a different guy instead.

Oh, the show also featured Rene Russo in her first ever acting gig. So that’s a thing, we guess?

We’ll just put this synopsis down for you, as it is the most efficient way to let you know how much we love this show.

“Johnny Domino is a well-known San Franciscan jazz musician who is accidentally struck by a lightning bolt in a freak cable-car accident. The strike allows him to telepathically recognize evil but robs him of the ability to sleep.”

First of all, that is incredible. Secondly, that’s something that the raddest 9-year-old in school would come up with in the 90s. Thirdly…how does one accidentally get struck by lightning? Is there a way to do it on purpose? No time to dwell on that, we have to dive right into this juicy show.

The show somehow got two seasons, which is a fucking miracle, including a crossover episode with the long-since-cancelled 1980’s show Manimal. But the important thing here is that Night Man is a superhero by night, and a saxophonist by day, which is the most 1990s combination ever. If you’re curious to see this train wreck in action, here’s the pilot episode on youtube, in full. Enjoy. We’ll play ourselves off.