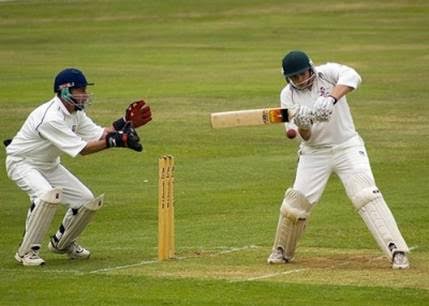 We all know there are only four sports that really count—football, basketball, baseball when you’re drunk, and hockey when your team is in the playoffs.  Many try to convince America otherwise, but they’re misguided people who get excited about sitting down for two hours to watch 22 people run around without scoring a single goal, so you can cram your “soccer is the most popular sport in the world” shit right where the sun don’t shine.

Now, sure, every once and a while we pretend we like soccer, usually when our team is doing good, or when we randomly decide to expose FIFA corruption for reasons totally unrelated to them not giving us a World Cup since 1996, so we can at least sympathize with the people who have been brainwashed since birth into thinking that people kicking a ball to each other repeatedly on a giant field is entertaining, but we can’t say the same for what is apparently the second most popular sport in the world—cricket.

Cricket is bullshit.  But we don’t know anything about it.  So we’ve decided to try something new—we will comb through the Wikipedia page for the sport, and try to explain to you the rules, as far as we can understand, so you can learn how truly stupid the sport is. 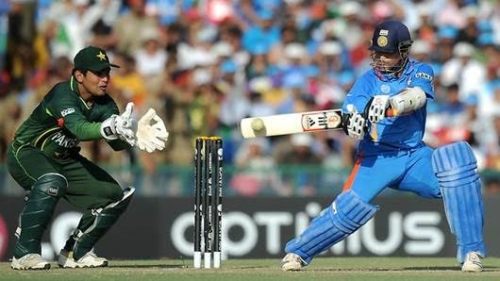 Cricket’s popularity is mostly bullshit and tradition.  It was first played in England around the 16th century, and became their national sport by the end of the 1700s.  You might recognize this time period as the era where England made every effort to take over and homogenize, like, oh, the entire fucking world.  Cricket is most popular in England, the Australasia region, the Indian subcontinent, the West Indies, and Southern Africa…hmm…what do these places have in common?  It couldn’t be that around the time that cricket became the most popular sport of England that England was busy brutally taking land from the natives of these areas in the world and imposing their own language, laws, and customs on them, could it?

So yeah, cricket is popular, just like how if America hadn’t waited until after the abolition of slavery to get their Imperialism on a lot of countries would be really into labor-intensive farming.  But we digress.

Cricket is baseball’s boring older cousin, the one who met you that one time you all were hanging out with baseball who somehow got your number and is now calling you asking to crash on your couch for a week.  Yes, baseball was probably influenced by cricket, but if that’s your go-to defense towards us calling cricket long and boring you’re probably forgetting exactly how drunk we have to get for baseball to get really interesting.

This was actively more exciting than anything else that happened in the game.

Listen, we don’t know shit about cricket, other than the basic facts that you pick up from a typical American exposure to the sport.  Their baseball bat is flat and good for killing zombies, they bounce a ball and hit it in random directions, and that the games go on for fucking ever.  Here is our best estimation of the rules, based on Wikipedia.

There’s a small rectangular patch in the field, which is basically like a mix between the infield and the pitcher’s mound.  It’s 22 yards long, and apparently this is called the pitch, which we’re pretty sure is a thing in soccer too, but who knows or cares.  Each team bats during their inning, and there’s a pitcher.  Also there are wickets, though the initial part of the Wikipedia page doesn’t explain their importance so we’ll look into that later.  Anyway, you have fielders, who we’re guessing are the other 10 players on the field, and they try to catch the ball probably to get an out.  The batter tries to hit it away from them, and when he hits it he runs to the other end of the little infield strip thingy, and apparently that’s all it takes to score a run.  Oh, and they keep hitting until they get out, since there’s no bases or anything to worry about.

So far that seems pretty simple.  We’re not so sure what they’re talking about with the length of the  games though—each inning apparently lasts until either ten batters get out or there are a specified number of something called “overs” which, as best as we can tell, is what they call it when you pitch 6 times?  It looks like they’re really not consistent with this fucking sport—teams decide when they start if they want one or two innings or maybe more?  We’re not sure, all that we know is that a game could last 20 overs per side which still sounds like gibberish to us, or it could be Test cricket, which is played over five days, which sounds fucking miserable. 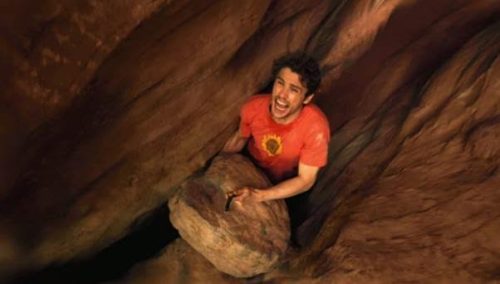 For reference sake, that’s about 127 hours.

Now it looks like we have to talk about wickets.  The fuck is a wicket?  So from what we’re gathering—and please, if we’re wrong, don’t go into the comments to correct us because we don’t care and your sport is silly—the wicket is like, three sticks of wood that have two horizontal things resting on it called bails?  Like a little twig that sort of just sits there unless it gets knocked out?  Apparently, if a bail is dislodged, or if a stump falls down, the wicket is “put down.”  That’s probably bad?  Two batters are on the field at the time, each one “owning” a particular wicket, which they stand within the “popping crease” (we hate this article so much) of, which is basically like having a foot on a base.  If the wicket gets put down while the ball is live and he’s not standing behind the crease, then the batter is out. 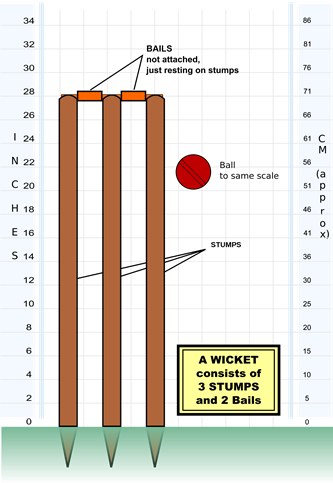 This does nothing to help us make sense of this stupid game.

The fielding team has a bowler (pitcher) and a wicket keeper (Nic Cage movie?) with the other nine members scattered throughout the field in all directions hoping to be able to catch a batted ball (or, as it’s called in cricket, the Dobby.  Probably.  Maybe.  Okay we made that up, but you believed it for a second didn’t you?).  The pitcher (fuck off, England, we’re not going to use your fancy terms) is trying to throw the ball and have it hit and knock over the wicket, which he can do by bouncing it, having the ball just hit the crease (called a Yorker, which, ugh) or can do a full toss, which is what it sounds like (we’re assuming.  It’s them throwing the ball without it bouncing right?)  Either way, if they hit the wicket, the batter is out (they call this being “dismissed” or “bowled out”).  If the batter misses the ball but uses a part of his body besides the hand holding the bat to divert the ball which otherwise would have hit the wicket, the batter is “out leg before wicket” or “LBW” or “what the fuck is actually happening right now in this article.”  We think they both mean you’re out, so it really doesn’t fucking matter what you call it other than out, right?

Anyway, if the batter hits it and it gets caught, he’s “caught out” which, okay that makes sense, that’s a baseball thing, thank you for having one thing not pointless and confusing, Cricket.  If the ball lands somewhere, the two batsmen can run back and forth on the pitch, each time each of them reach the other end it’s worth a run.  They can go for one run, a shitload of runs, or they can stay put, since if they’re running and they leave the crease, they could get out if a fielder can have the ball hit or touch the wicket hard enough to knock off a bail while the batter is still running.  That’s called “run out” and sort of makes sense too.

The field itself is an oval, with the pitch in the middle, so unlike baseball there is no foul ball territory.  Like baseball, however, there are home runs—specifically, if you hit it outside the oval field (and into the stands filled with people who have a lot of free time on their hand) it’s called a “Grand Slam Thank You Ma’am” (that is not true) and you score six runs (that is true).  If the ball bounces and rolls to touch the boundary (or edge of the field) it’s worth four runs. 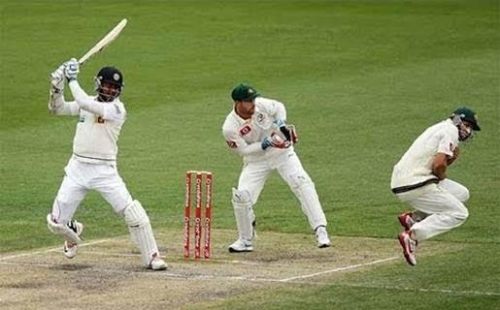 Still have no idea what we’re looking at here.

There are more rules that we cannot fathom.  If the hitter swings and misses but it doesn’t hit the wicket, he can still score runs, which are called byes.  If it hits a part of his body (but wouldn’t otherwise hit the wicket if it hadn’t) and he runs to score it’s a leg bye.  If the batter gets out of his box to swing, and misses, but it doesn’t hit the wicket, the wicket keeper can then catch the ball and hit the wicket himself, possibly while screaming about bees.  Oh, and if a batter is really good, he can dismiss himself without getting out after hitting a milestone such as a century, which is scoring a hundred runs, though the language of this makes it seem like that’s not set in stone?  Like, you can still keep going, and wouldn’t you want to?  Seems kind of dumb to be like, “Welp, I scored 100 runs, time to let someone else have a turn” in a professional and competitive sport, doesn’t it?

We mentioned overs before—that basically means that each pitcher has to pitch 6 times, at which point they are replaced by a different fielder to pitch.  This seems very wasteful, and might explain why the games go on for fucking ever. 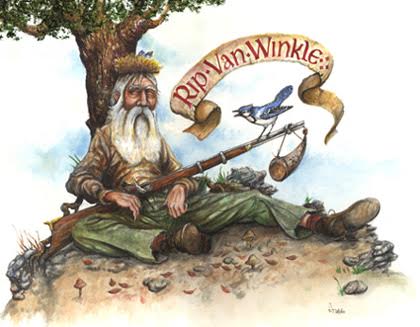 A typical cricket fan taking a nap between innings/days

That’s about as nuanced of an understanding of cricket as you can ever hope to get from us.  We’ve already run out of fucks to give about this sport, and the fact that the games can be any variety of lengths seems arbitrary and stupid.  They literally play cricket in a way that if it applied to baseball, you could have two teams come up for the World Series and go, “Hey, I was thinking…what if we just play 6 innings today” and the response is “Sure, that sounds good, so long as we can play 23 tomorrow for no reason.”  And again, they go on for days.  This is a sport invented in a time where people were so bored their two options for entertainment were watching people smack a ball with a flat stick for days at a time or contracting diphtheria, so yes, in that world, cricket’s popularity makes sense, but come on people.  We have smart phones.  There are naked people on the internet.  Football actually kills people.  That might not be the best selling point for football, sure, but it at least sounds exciting doesn’t it?

Anyway, there you have it.  We tried to learn about a sport played outside of America, and we came away thinking it was just as dumb as we thought coming in.  So we didn’t really learn anything at all, and definitely haven’t learned to respect things popular in the rest of the world, which feels like an appropriately American place to land on this.  Next up, maybe we’ll try to read the Wikipedia article about jai alai.  Oh God, no, we’re kidding.  Oh God, that’d be miserable.  No thank you.

This entry was posted in England, Insulting Foreigners, The Rest of Them and tagged America, Cricket, England, Soccer, Sports. Bookmark the permalink.

One response to “AFFotd Presents: America’s Attempt to Understand Cricket”