“What’s the use of flying if you can’t even milk a cow on a plane?”

What?  Bob, are you having a stroke? 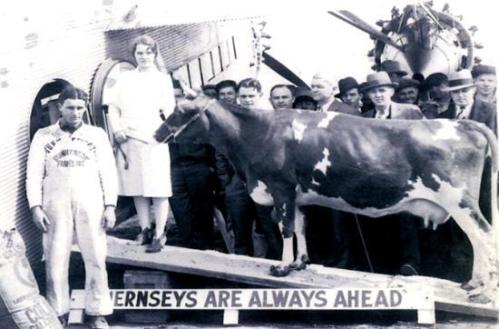 You are blessed to live in a time where it’s actively difficult to be truly bored.  No, we know that any combination of events, from work meetings to being stuck in traffic can leave you “bored” but none of you have experience real boredom, in the same way that you’ve been hungry before but not actively starving.  We have the internet to distract us, we carry tiny computers in our pockets that can call people and play stupid but additive games, and apparently radio and television are things that people still kind of use when they don’t want to pay for premium Spotify accounts or Netflix.

This is about the first time a cow was ever milked mid-air.

America was a lot easier entertained in 1930, okay guys?  Let’s dive into this. 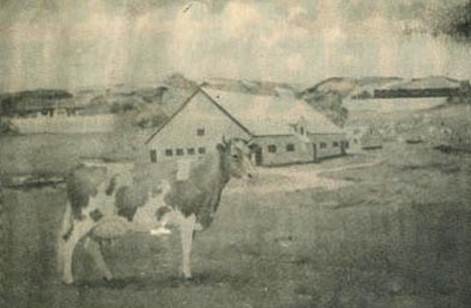 On February 18th this year, we posted our daily “Today in American History” fun fact on our Facebook page (if you haven’t liked that page, go ahead—every person who likes the page gets to have sex at some point in their life) and in doing our research discovered the following statement on Wikipedia’s “Events Occurring on February 18th” article.

We don’t know what we love better, the fact that this event happened, or that it was deemed important enough for some people to call February 18th “Elm Farm Ollie Day.”  Actually, no, it’s totally the fact that it happened, because flying a cow and milking it just because seems like the most desperately 1930’s activity imaginable.  “Well, we don’t have any World Wars to focus on, and TV isn’t a thing yet…wanna just, like, fly a cow on a plane?” 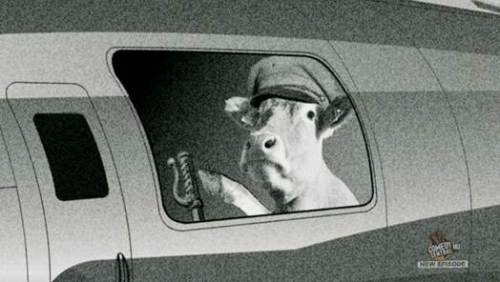 From February 15-23, 1930, St. Louis held the International Air Exposition.  While little documentation of the event itself exists, you can pretty much picture it yourself—a celebration of aviation, a still relatively new technology, with air shows and various stunts and gimmicks, all extremely exciting at the time but considerably dull in reality.  We know it was sponsored by Shell Petroleum, and featured Lieutenant Jimmy Doolittle, who you of course know as the guy you didn’t know about until you read the following few sentences.  Jimmy Doolittle was an aviation pioneer, though his biggest contributions occurred during and after World War II, where he was awarded a Medal of Honor and ended his military career as a four-star general.

At the time, however, he was a famous inter-war pilot, because flying well was something that was considered entertainment at the time.  He made the first cross-country flight (taking 21 hours, including a refueling stop), won air races, and helped design planes that could hold more fuel than their predecessors.  So, he was a pretty exciting celebrity to take part in this expedition, but no one remembers or cares about that (it’s not even important enough to make his Wikipedia page) because the only thing that mattered about this Air Exposition was Elm Farm Ollie the goddamn flying cow. 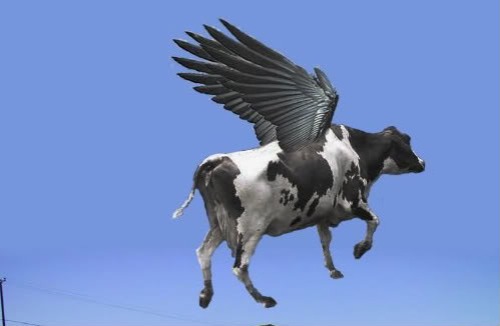 Elm Farm Ollie, who was known as Nellie Jay at the Sunnymede Farms in Bismarck, Missouri that she called home, was about two years old and known for her gentle disposition, which made her an ideal candidate to be put on a rickety plane as it flies the 72 miles from Bismarck to St. Louis.  Because “I don’t know, it seems like a cool idea, and we’re bored” wasn’t an appropriate enough reason to justify this decision, they decided to choose Nellie, a particularly productive milking cow who would need to be milked during the flight, so they could have scientists observe the effects of midair altitude on animals.  Also, admittedly, it was a pure publicity stunt.

Nellie Jay was milked by Elsworth W. Bunce, a Wisconsin native who became the first man to milk a cow mid-flight, because of course someone from Wisconsin would take that title.  Eventually, this yielded 24 quarts of milk, which, holy shit Nellie.  This milk was then, and we love this tidbit so much, put in cartons and parachuted down to the Exposition spectators below.  Charles Lindbergh reportedly drank some of Nellie’s milk, but while we’d like to think that he ran out to grab one of the parachuted milk cartons, pushing old ladies out of the way for it, unfortunately they just set aside a quart of it for the famous pilot when they landed. 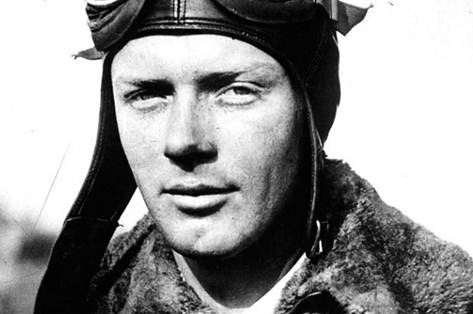 After the flight, Elm Farm Ollie, known as Nellie Jay, was renamed the Sky Queen, officially making her America’s best-named cow.  A St. Louis newspaper declared that the flight would “blaze a trail for the transportation of livestock by air” which doesn’t sound like something to get excited about but, again, boredom in 1930.  Sky Queen lived another eight years, which means that she lived to be ten, which might seem like she died tragically young, but apparently the average lifespan for a cow that we don’t kill for food is about 15, so it’s not as bad as you probably expected.

Today, despite living in Missouri her whole life, the legacy of the Nellie Jay the Sky Queen lives on primarily in Wisconsin.  “Well, why is a flying cow, dropping dairy products from the sky on little parachutes, only a big deal in Wisconsin?” you might ask having never met a Wisconsinite.  Middleton’s National Mustard Museum (again, makes sense if you know people from the state) produced an opera called Madame Butterfat in honor of Nellie’s flight.  No, we’re not making that up, here’s the song “The Bovine Cantata in Bb Major.” It’s eight and a half fucking minutes long, and randomly features lines like, “My Ollie flies over St. Louie, my Ollie flies over Racine, my Ollie flies over Milwaukee, oh bring back my moo-cow to me.”  There’s also a “Hello Dolly” section.  It’s pretty ridiculous.  We cannot stress this enough, though.  Ollie absolutely never flew over Racine, or Milwaukee.

Again, Ollie never went to Wisconsin, but there’s no point in trying to stop Wisconsin dairy farmers for celebrating “the day that one cow flew that one time” as a holiday, because it’s actually against state law to try to take a reason to drink from a Wisconsin resident.  “A cow once flew?  I’ll drink and eat cheese to that!” is probably not the official motto of Elm Farm Ollie Day, but we’d like to think it is. 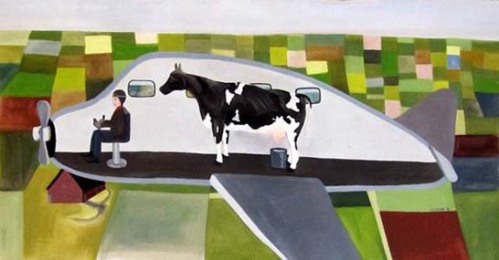 Why yes, “Elm Fam Ollie, First US Animal to Fly” by Allison Byrnes IS a painting that exists, why do you ask?

Now, we’re definitely overstating the importance of Elm Farm Ollie Day in Wisconsin (most of our Wisconsin readers were likely unaware of the holiday’s existence, but will now start celebrating it in due diligence) but there’s something wonderfully American about the idea that this random tidbit of information lives on because at least some people (and mustard museums) decided that a cow getting milked on a plane about 350 miles away from where they live was cause enough to celebrate it 85 years after the fact.  Ollie a.k.a. Nellie a.k.a. The Motherfucking Sky Queen will live on forever, or as long as Wisconsin has a passion for cheese.  (So, forever).

God bless, Ollie, you airborne lactating bovine.  And to the rest of America, be glad you live in a less boring year than 1930.