“Forsake your God, because all that lies herein is death and fire and petulance, and none can save you, none shall live.”

Listen, America, this shit is important.  You need to start ignoring Budweiser.  We’re already on the way to phasing out Budweiser, with 44% of drinkers aged 21 to 27 having never had a Bud in their wonderfully enriched lives, but we’re getting to the point where Budweiser is going to do its best to get your attention, and you mustn’t let it.  Much like a misbehaving child or, more accurately, an emotionally unstable ex who keeps sending you messages no matter what you do, Budweiser is going to get more and more loud with their terrible, awful beerness before they start to fade away.  It’s going to take a long time, but we have to do whatever we can to ignore Budweiser’s “U Out?  I’m not wareing undrware ;P” texts while we can, because the company has clearly gone insane and there’s no sign of them letting up for now, and our only course of action is to close our eyes and hope they go away.

In 2011, Anheuser-Busch purchased Goose Island in their attempt to corner a market that saw more and more Americans shunning Budweiser for beer that, you know, tastes good.  The following year, they brought forth Bud Light Platinum, which you might know as “why does my beer taste like someone drizzled like, three sips worth of vodka in here?”  2012 also saw the creation of the Lime-a-Rita, which is a great way for people who don’t like alcohol to remind themselves that they really need to sit down and reevaluate their lives. 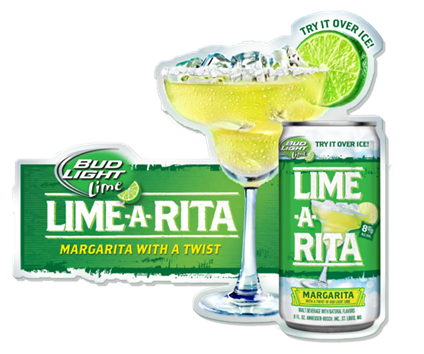 “I like it because it’s fruity, but it still can get you drunk, and oh God how did I end up passed out in a Walmart?”

Lately, Budweiser has been playing the role of the petulant child, spending millions of dollars to shout at Americans for “tasting” their beer instead of “drinking it” during the Super Bowl which, frankly, sounds like the kind of thing you’d hear Joe Rogan say as encouragement to a contestant of Fear Factor during the gross-out food part of the show. “Don’t taste it!  Just eat it!  If you manage not to puke you go on to the next round!”

Which brings us to the latest shout of “Mommy mommy look what I can do” that is set to be released on February 16th (oh darn, it’ll just miss Valentine’s Day, huh?) and also our latest totally-not-monthly installment of…

“Look, America!  Why aren’t you looking!  We’re going to make Bud Light cocktails now!  We hate you and we want you to look at us!”  Don’t do it, America, don’t give them the satisfaction.  We’ll do the looking for you, and we’ll tell you about this awful concoction that’s soon to hit your shelves.

The press release for the MIXXTAIL line of Bud Light drinks states, “No Bartender Necessary: Bud Light Introduces Cocktail-Inspired Beverages.”  That pressure at your side is your liver trying to escape—you know the drill by now, same as when you last opened that bottle of Fireball and said “Imma drink all of you tonight, sucker” you just apply pressure and wait for the organ to settle down.

Good.  Now that your liver has been corralled again, we’ll tell you what this horrible line of beverages entails.  Bud Light swears that Mixxtail “combines the great taste of America’s favorite cocktail flavors with the uniquely smooth and refreshing finish expected from a Bud Light” which will serve as “the perfect pregame in a bottle” while “turning you against all that you love and find dear until all that is left is Budweiser, and then, and only then, when you have turned your hatred into a devotion, will we let you die.”

Admittedly, we might have misread that last quote, our vision sort of went red after they told us that they were going to add the gross, disgusting aftertaste of Bud Light chase down “cocktail-flavor” while hoping that we’d drink this all while sober enough to taste every.  Fucking.  Drop of it.  So who can say for sure if they plan on kidnapping us and forcing this down our throats until we love it through Stockholm syndrome?  Well, we can.  We’re saying that.  That’s the only way this can be successful.  Active brainwashing.

“I taste the rainbow”

The Mixxtail, which has a second “x” in it because it’s “extreme” or maybe “their product developers hate themselves”, come in three flavors.  There’s the Hurricane (which you’ve heard of) and the Long Island Ice Tea (which you’ve blacked out on) and the Firewalker (which, woah, that’s racist, y’all, you can’t just call a product like that and expect Native American groups to…oh right, sorry, walker, sorry, Firewalker, we misread that, yeah we’ve never heard of this fucking drink).

For those of you unsure about these flavors (and how they are patently unsuited to come in a “sort of Bud Light” variety) the Hurricane is, of course, a super boozy tropical rum drink, made with a mix of white and dark rum with various fruits, though most ingredients tend to at least call for passion fruit and lemon juice.  A Long Island Ice Tea is basically what happens when a drunk bartender puts all the clear boozes he or she can find into a glass (no, seriously, tequila, vodka, white rum, triple sec, and gin) put some lemon juice and simple syrup in there, then top with a dash of coke.  Well, the recipe calls for all of that, most bars will just put the 5 boozes in a tall glass and finish the rest with coke, ‘cause you’re going to be too drunk to know the fucking difference.

Finally, we have the Firewalker, which is described as a red hot cinnamon apple flavor that’s “a hot trend” which is “a complete load of horse shit, you made that up, Bud Light Extensions marketing director, Mallika Monteiro, you made that the fuck up.”  As far as we can tell, there’s no such drink as a Firewalker that’s common at all.  Admittedly, our only claim to know this for sure is the fact that Google comes up with literally no cinnamon apple flavored cocktails with that name (we found a “Fire Walker” that was literally “a good sounding cocktail a mixologist came up with for a Firestone Walker event”) and, of course, the fact that our staff are such unrepentant alcoholics that if we’ve not seen a drink at a bar, we’re pretty sure it doesn’t exist outside of you trying to make buzz by marketing a flavor your clearly made up as the “new hot thing.”

The important thing is that these drinks, which at least have the decency to clock in at 8% ABV to get you a buzz.  They come in 11.5 ounce recloseable bottles (like the mini Whatever-a-Ritas they sell) as well as 16 ounce and 25 ounce cans if you want to give yourself an excuse to say, “Well, a Four Loko would have been cheaper and gotten me drunker and would at least not try to have a beer taste to it, but hey, this can be served over ice.”

First of all, don’t buy these.  These are guaranteed to be awful, save your stomach, drink actual beer, or actual cocktails, don’t pussyfoot the nonexistent line betwixt the two.  Second of all, if you do buy these, you’d better be one of our staff writers, and you’d better be writing a taste test AFFotD.  And third of all, if you’re gonna write that article, Jason, don’t pour it on ice, despite what they tell you.  They want you to pour this in a glass, and put ice in that glass, but what they really want is for you to justify every reason why you hate yourself.  Don’t play their game, Jason.

But the rest of you.  Yes, you America.  The important thing to take away from the existence of Mixxtails is that you’re better than this.  Don’t let Budweiser tell you otherwise.  Just keep ignoring them and hopefully, someday, if we’re lucky, they’ll just leave us alone and let us drink things that taste good and get us drunk in peace.

Until then, we’re just going to ignore Budweiser’s texts for a while, and no, Budweiser, messaging us, “Lol I totally took like 5 birth control pills 2nite can I com over lol” isn’t going to change a thing.

One response to “AFFotD News Item of the Month: Bud Light Mixxtail Cocktails”