~We’re not the best at puns

Budweiser is the number one selling beer in America.  Let that sink in, America, and think long and hard about what you did.  Do you do this just to make us upset?

The reason doesn’t matter, all that we know is that Americans spend more of their money buying beer produced by a Belgian-Brazilian conglomerate than on beer that tastes like anything other than sadness.

We’re not joking, we’re pretty confident abject sorrow  is the active ingredient in Budweiser, and we got confirmation of this fact once we saw this Yahoo Answers post which is easily the most depressing thing we’ve ever read about beer.

While Budweiser is not exactly known for pushing the envelope past their “straw flavored spit water” standard, they do branch out on occasion and try to introduce new beers to an always-hungry-for-innovation market.

The most popular of these efforts tend to range from “Bad but people seem to like it” to “this beer is not actively awful.”  Even though they set a pretty low bar with all their products, they have managed to, time and time again, create terrifying concoctions.  Beverages that haunt all who drink them for the remainder of their days.

Here are five such monstrosities.

Well, you know, apart from their actual beer products

For those of you who lost your taste buds in the great Beer Fire of 2002, or who are 17-year-olds who just snagged their first 24-pack from an inattentive liquor store attendant going through a bad divorce, Budweiser sucks.  This isn’t opinion, it’s certifiable fact.

Why would we so aggressively make this claim?  Well, first of all, try saying “Budweiser sucks” to someone who claims to like Budweiser.  They’re not even going to say it’s a good beer, their best defense consists of them mumbling, “Well, no, it’s not that bad.”

How bad is Budweiser?  They bought the domain for www.budweisersucks.com so that it’ll direct you to their site.  That’s right, if someone hated Budweiser and wanted to go to a website created by like-minded individuals, they’ll just end up on Budweiser’s home page.

With all that in mind, every other drink you’re going to hear about in this article makes Budweiser taste like a fine champagne in comparison.  Moët.

And after a gross miscalculation, you’ve got a shot of tequila mixed with a Bud Light and about half a cup of flat diet coke, and even though it’s so awful you think you might as well throw it away, but you keep trying to add that final ingredient that’ll magically cure it?  “Sprite!  Vanilla extract!  Something please I just want a drink that won’t make me vomit.”

The end result of all your futile efforts is what we’d like to suspect Budweiser’s Tequiza tasted like when it was on the market from 1998 to 2009.

Tequiza, which was labeled as “Beer with blue agave nectar and a natural flavor of imported tequila and lime” is referred to as a “fruit beer” in the same way that drinking red wine and spitting in a glass of bourbon can be referred to as “making a Manhattan.”

The label lists four primary ingredients, and only one of them (lime) sort of goes with beer, so long as the beer is bland and flavorless (which, given that this was made by Budweiser, is a safe assumption to make).

So if you want a beer that tastes like you poured Corona into a glass, accidentally spilled some tequila in it, poured syrup in because why the fuck not, and then took away some of the alcohol, Tequiza is the beer for you!  For those of you who’d rather not partake in such a culinary experience, congratulations, you’ve passed the test, you get to stay in America.

Back in 2002, Miller released an alcoholic caffeinated malt drink called “Sparks.”  Before shitty parents started using Four Loko as a scapegoat for the fact that their teenage kids couldn’t handle their shit and got alcoholic energy drinks banned, you used to find it at gas stations in particularly white-trash-y parts of the country.

You probably drank one because it was designed to look kind of like a battery and said “7% alcohol” on it, and whenever a battery purports to be alcoholic, you know you have to try it.

Much less well known, but equality revolting, was Budweiser’s “Tilt” which originally came in 6.6% and 8% ABV varieties while cramming you full of caffeine, Guarana, ginseng, and energy drink buzz words.

It’s still available currently, though it’s lost the caffeine and added booze to bring it to a more respectable 10-12% range.  Which means that, of the drinks on this list, this is the one we’d be most likely to drink, if for no other reason than two cans can start making us feel pretty pretty okay.

Bud Extra is a 6.6% ABV beer that contained caffeine, ginseng, and Guarana, meaning it was exactly the same as Tilt, only it wouldn’t give you the kindness of being fruity flavored to mask the awfulness of drinking a caffeinated Budweiser.

To compound matters, they actually would refer to it as “B-to-the-E”, meaning that not only were you forcing yourself to drink a Budweiser tasting energy drink, but there was a chance you had to hear people ordering it while trying to sound like 1990’s awkward white rappers.

Like Tilt, Bud Extra (B-to-the-E-to-the-o-m-g) has revised its formula to remove the caffeine, because there are people who campaign against alcoholic energy drinks so they can ruin everything.

It appears to still be available in its original formula overseas, and to best describe it we are going to borrow the words of one “Garthicus” who claimed, “I asked for 2 vokas[sic] and rebulls[sic], the bargirl said they don’t have redbull but have a similar product by Anheuser Busch…about 8 vodkas later I asked to see the can of this ‘other red bull’ it was then we realised[sic] that we were drinking vodka mixed with beer…Says a lot about a beer when you can mix it with vodka and think it is an energy drink.”

It does say a lot about a beer, Garthicus.  You’re a brave man for testing this beer out for us so we don’t have to. 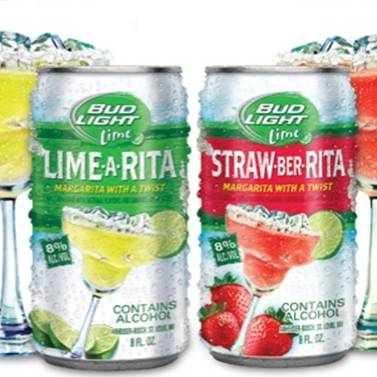 Oh God, what have you done, Budweiser?  What madness have you unleashed upon this world?  First of all, we have to get the bad news out of the way.

This comes in a small eight-ounce can, oh and it’s carbonated.  Let that settle in for a second.  Budweiser making a “Margarita and beer mixture” itself sounds disgusting, but the fact that it’s carbonation makes it seem more like a cruel prank.  If it sounds like it tastes awful…well it does.  Just, so awful.

We’re not going to say that Budweiser spent more time coming up with just the right shitty pun for this product than they did actually developing it, but it would make sense if that were the case, right?

“Okay, let’s put booze, fake strawberry syrup, and a massive sense of shame…awesome, should be good.”

There’s only one target demographic we can think of for this product—Frat boys who subconsciously want to sabotage any and all attempts at getting laid by saying the sentence, “Well, this is my room.  Here, have a seat on my bed.  Would you like a Straw-Ber-Rita?  Oh okay, you’re right it is late, I guess I’ll see you in class sometime then.”  So, uh, good job on that front, super effective, Budweiser marketing people!

If most of you opened a Budweiser can and saw a red liquid inside, your initial response would probably be something along the lines of “OH GOD BEER IS TURNING INTO BLOOD IT’S FINALLY HAPPENING END OF DAYS!”

You’d then sip it, because you’re a depraved alcoholic and you figure that beer that’s turned to blood would probably still be alcohol, and you’d realize that you were actually imbibing a mixture of Budweiser and Clamato, which is a combination of tomato juice and clam broth.  You would be relieved that you’re not drinking blood…but not that relieved.

While it’s primarily used as a mix for alcoholic beverages, which we guess is fair since the only way we could imagine salvaging this drink is by letting it get you drunk, it’s fallen out of favor in the United States because, thankfully, we got over that whole “mixing clams with tomato” craze in the 70s.  Clamato is most popular in Canada and Mexico, but that doesn’t stop Budweiser from trying to force their Chelada down our gullets in America.

Now if you’ll excuse us, we’re going to have to chug a bottle of whiskey to get the taste of this foul swill out of our mouths.