“Let’s see them sleigh bells ring-a-ling, jing-jing-jing-a-ling too/  Come on it’s a lovely weather for WHO ARE YOU YOU ARE FULL OF SPIDERS I AM BECOME DEATH DESTROYER OF METH.”

~The Mountain’s Most Recent Holiday Jingle

Last week, we could barely contain our excitement that The Mountain had released a holiday collection, combining Christmas cheer with the best shirts for absorbing Robitussin stains.  Any time we get an opportunity to write snarky-but-honestly-we-love-them-so-it’s-all-in-jest articles about Big Face Animal shirts is a special occasion for us, so you can only imagine how thrilled we were to open our email to see the following message greeting us after last week’s post.

Again, to members of The Mountain reading this, we’re not above accepting free samples.

Anyway, as previously mentioned, the glory of The Mountain’s holiday collection could not dare be contained in a single fun fact, so we’re here to double your pleasure, and double your fun, or at least double your desire to find the nearest gas station that still sells Sparks.  And to you readers out there, if you see a shirt you un-ironically (or, for many of you, let’s be honest here, ironically) want to purchase, feel free to email us asking for the URL that we literally put in the first sentence of our article.  No, seriously, do that, it would make our day.

The concept of taking a lifelike image of an animal, dressing it up in clothing, and blowing it up to encompass the entire diameter of your every expanding beer belly requires a delicate balance between realism and absurdity.  You might never see a giant pug wearing aviators in real life, but you at least can say to yourself, “well, if pugs started wearing aviators and growing uncontrollably, I guess this is what it would look like if I took a picture of that and made it into a shirt.”  Sometimes, The Mountain feels they have to give the animals human limbs, because otherwise a dog riding a motorcycle would just be absurd, at which point the shot is pulled back because if you took a giant head and gave it arms that looked as if they were jutting out of his neck, oh God look at this picture of an orangutan drinking hot cocoa.

Does anyone else think that this kind of looks like an tarantula with an orangutan head?  Or were you not thinking about that, but now as you look at the arms jut directly out of the poor guy’s skull, staring into it’s reflective, distressingly lifelike eyes, and after clicking on this link, you can’t see it as anything but a giant monkey-spider (not to be confused with the far far far less horrifying spider monkey)?  Oh, that was the case, and we’ve now ruined this perfectly harmless shirt for you?  Well fuck, sorry, that’s our bad.  Moving on. 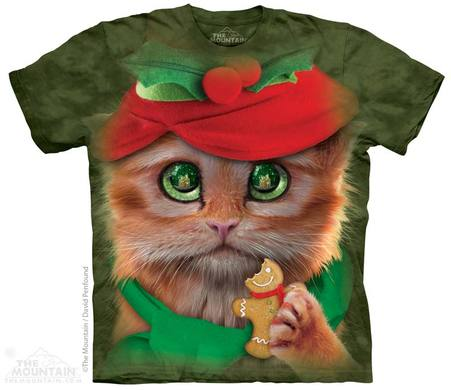 While much less terrifying, this kitten (that is apparently an elf as well?) serves as another reminder that giant faces covering a shirt’s entire girth probably should not be given limbs, as the paw holding a Gingerbread Cyclops here looks like it belongs in a Laser Cats video.  Now, upon first glance, this is just a Christmas kitten, which the existence of the internet has proven is something people will trip over themselves to purchase.  But the more you delve into the details of the drawing, the more sinister it seems.  The mistletoe on this little guy’s red cap looks cute until you remember every person you’ve ever met who has used a mistletoe hat as a creepy excuse to try to kiss everyone at your office Holiday party while somehow feeling completely justified growling, “Oh, you’re no fun” to everyone who correctly decides that, no, they’d rather not put their lips on the sweaty, drunk mail room guy who reeks of aftershave just because they spent five bucks on a “Merry Kissmas” hat as an excuse to assault your personal space.

On top of that, there’s the gingerbread cookie, which somehow has a human bite mark on it, but more than anything, as you find yourself gazing into this kitten’s green eyes, what greets you?

Yes, fluffy is going to steal your Christmas presents, just like he stole your gingerbread cookie.  His eyes are quite literally on the prize.  And nothing will stop him.  Consider yourself warned. 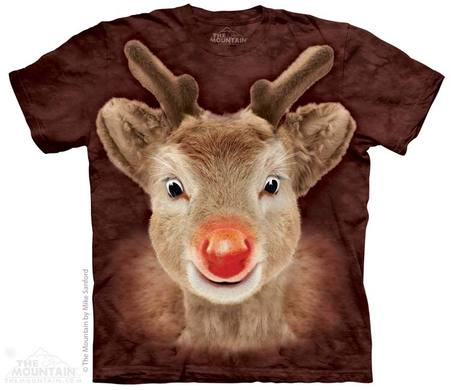 This is called the “Happy Rudolph” shirt, but emotions don’t exactly translate well between species.  Why are you smiling like that, Rudolph?  What did you do?  W…what are you planning to do?  P…Please, just don’t hurt our families.  Please Rudolph whatever you are going to do, just do it, but leave our families out of this you MONSTER!

Penguins are by far the coolest birds that, with enough photoshopping, can be made to look like a fat guy with a pencil-thin chinstrap beard.  By the way, here’s a fun mental game for you.  Stare at this penguin shirt for one minute, without blinking.  Once you’ve done that, look at the nearest wall, and blink three times.  Now, ask  yourself, “Wait, do penguins have ears?”

It took you a second to remember the answer, didn’t it?  Just a second more than you’d normally expect, because you’ve never before imagined putting a Santa hat and a scarf on a penguin.  Or maybe that’s just us.  Full disclosure, we’re pretty drunk right now. 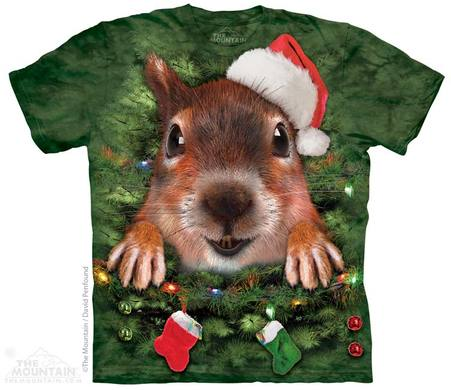 OH GOD IT’S A GIANT SQUIRREL BURSTING OUT OF A CHRISTMAS TREE IT’S FINALLY HAPPENED THE SQUIRRELS HAVE TURNED INTO GIANT MONSTERS HELLBENT ON…oh, no wait, okay, it’s just a shirt showing the giant rodent that haunts our most potent nightmares.  Crisis averted, everybody.

Actually, that’s kind of awesome.  Pandas need gifts too, we’re glad The Mountain is out there, looking out for panda Christmases everywhere.  You keep on doing what you do, The Mountain.  For all the pandas, and 5XL-sized panda fans out there.  We’ve said it before, and we’ll say it again—you’re doing God’s work.