Five Delicious Culinary Treats Made Out Of Bourbon

“I want this inside me.” 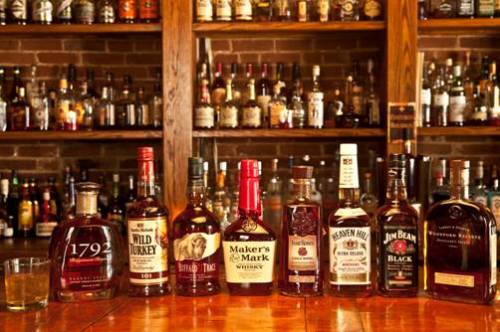 For most Americans, the only complaint they can think of regarding alcohol is that you can’t drink and eat it at the same time.  Of course, professional booze hounds throughout the nation know that this isn’t entirely true, and some of you have already discovered and happily devoured various alcohol-laced treat after a fulfilling meal/binge drinking session.

But if you’re an American hoping to eat your booze in a delicious manner, there’s only one base liquor you can allow yourself to seek.  Bourbon.  Giver of life, taker of brain cells, more American than apple pie bourbon.  You can go ahead and thank us in advance for introducing these to your life.

Five Delicious Culinary Treats Made Out Of Bourbon 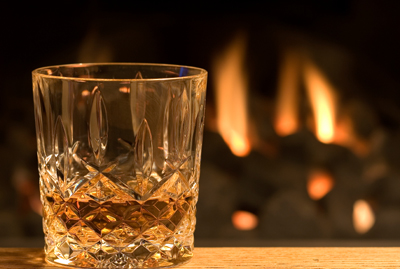 American know-how has no limits, especially when it comes to alcohol.  As the old saying goes, “shoot for the moon, even if you miss, you’re going to make something out of alcohol and you should be very proud of that.”  Or something.  We only read the first few words of motivational posters, if we’re gonna be completely honest here.

Anyway, here are some tasty, generally sweet foods made out of bourbon that you’ve already bought without reading all the unnecessary yackety-yack of this article. 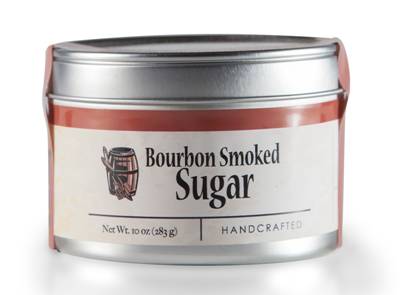 Bourbon Barrel Foods, apart from having a glorious name, sells various bourbon related products.  This includes not one, but three different flavors of bourbon sugar.  At about ten bucks a tin, you can get bourbon smoked sugar, mint julep sugar, or bourbon vanilla sugar.  How does one find themselves with bourbon smoked sugar?  Well, Bourbon Barrel Foods takes raw sugar and smokes it (duh) in re-purposed bourbon barrels, meaning that the flavors from the bourbon aging process goes into the sugar which actually, holy shit, sounds delicious.  Since bourbon itself is much sweeter than many liquors (thanks, distilled corn!) it’s not that much of a stretch to think about adding that bourbon flavor to sugar, which you can then add to coffee or yell at your friends when they lick their finger, stick it straight into the jar, and then rapturously suckle on the grains that have adhered to their damn thieving hands. 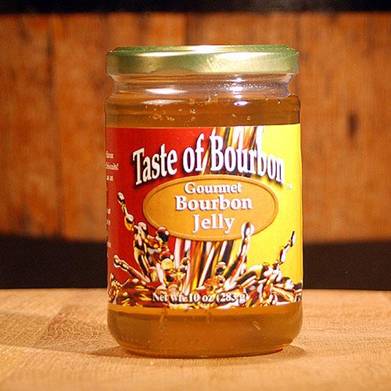 In a similar vein as bourbon sugar, we have gourmet bourbon jelly from Taste of Bourbon.  You might point out that flavoring a jar of jelly like bourbon would limit it’s uses, since you’re much more likely to make a PB&J with grape jelly than booze jelly, to which we’d respond that anything can become real if you dream hard enough, and if you’re not dreaming of a peanut butter and bourbon jelly sandwich, we don’t want to be your friend anymore.  The website advertises that this bourbon jelly (again, we cannot stress this enough jelly made out of bourbon flavored like bourbon) is good on toast, biscuits, mixed with cream cheese, or even added to gravy, which sounds just crazy enough to work.  It’s less than 10 bucks, which is probably worth it because if you have a jar of bourbon jelly you have to ask yourself—honestly, how often are you really going to use it?  That jar is going to last you a good three years, and that’s three years of people opening your fridge, saying, “Holy shit, they make a bourbon jelly?  What a world we live in!” and then complimenting you with a high five and/or sexual favor.  It’ll pretty much pay for itself within the first month. 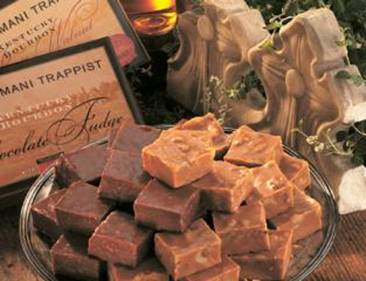 We’re just gonna throw this out there.  This is bourbon fudge that was made by monks, which sounds like the origin story of an American superhero more than anything else.  “And then, upon eating a confection crafted by monks using only the finest American bourbon whiskey, mild mannered American Johnny Smith transformed to…a high functioning alcoholic.” It comes in a variety of bourbon-melded flavors, ranging from chocolate bourbon to butter walnut bourbon to hold on a second we’re going to take a quick break to start stuffing bourbon fudge into our mouths.

Much better.  Anyway, this fudge doesn’t come cheap (ranging from 20 to 35 dollars for a 12 ounce box, plus delivery) but who are we to question the pricing of booze-laced fudge from powerful Christian wizards? 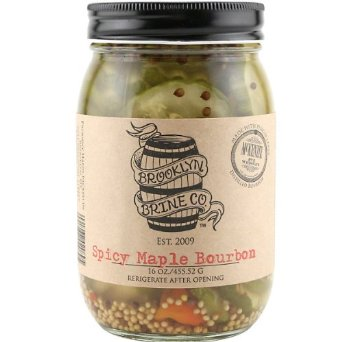 We’re pretty sure that these pickles can be purchased by someone under the age of 21 if they’re willing to shell out 12 bucks to wait two weeks to get a jar that contains a shot of bourbon, so hats off for encouraging more-effort-than-its-worth underage drinking.  This product soaks Kirby cucumbers in maple syrup, bourbon, apple cider vinegar, and spices.  It’s made in Brooklyn, which of course would explain why $12 plus shipping seems like an appropriate price for pickles to them, but we’d still buy them because as soon as we see the word “bourbon” in a product, we black out and when we wake up we discover we ordered the whole inventory and also a bottle of wild turkey which we then chugged.  Anyway, you’re going to have to wait for Brooklyn Brine Company to restock before you can try it yourself, is what we’re saying. 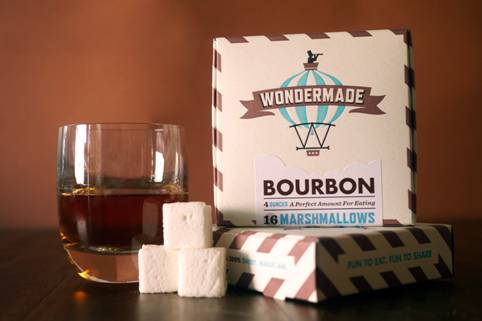 Holy shit, this is a thing?  A thing that’s possible?  We live in such a wondrous world that we can take America’s favorite sugared horse hooves and add bourbon to the mix?  Of course we can, this is America, we invented both diabetes and finding a ways to drink against doctor’s orders when you come down with the aforementioned diabetes.  Wondermade, the husband-and-wife company that makes and distributes these confectionery delights, doesn’t get into specifics of how they bourbon up their mallows, but it’s pretty safe to assume that at least some bourbon is added in the cooking process, and that it tastes like the first time you kissed a girl you really liked.  Or, you know, marshmallows that have the alcoholic sweetness of bourbon.  Either, or, really.

Of course, as delicious as all these products sound (we know you’ve bought all of them already, and we don’t judge you for that) remember, when you find yourself without bourbon pickles or bourbon marshmallows or bourbon jam to eat with bourbon sugar, you could always just go out and get a bottle of the real thing.  No matter how much your boss insists on screaming, “And Jesus Christ, you REEK of liquor, it is 9 in the morning you degenerate,” any time is an American time for bourbon.

One response to “Five Delicious Culinary Treats Made Out Of Bourbon”