Five Reasons Why No One Is Afraid Of North Korea 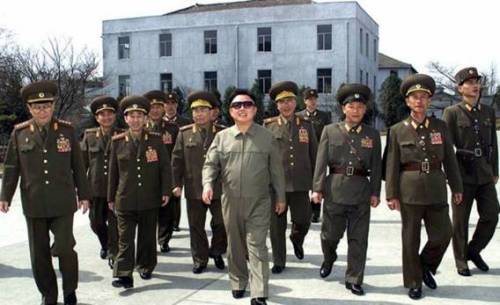 A lot of our readers were born in the late 1980s and 1990s have never lived in actual fear of nuclear weapons.  Sure, we’ve all seen the 1950s cartoons that say you can survive a nuclear blast if you hide under a desk and also are a turtle, but for those readers who didn’t live through the 50s, 60s, 70s, and early chunk of the 80s, the concept of “actively fearing nuclear annihilation” seems less like “real life” and more like “Wow, 24 finally jumped the shark didn’t they.”

Of course, for those of our readers that did live through that period…that was pretty freaky, right?  Shit almost got real a few times there.  While not exactly paralyzing America with fear, the nuclear threat was always in the back of our minds.  Russia was a powerful and terrifying foe, and they really didn’t like us.  They only reason they didn’t slaughter us outright is that they knew we’d probably do the same in kind, and even with that mutually assured destruction in place, they were still considering it.

This is relevant because, for the first time in decades, America has actively been threatened with nuclear attack.  As in, “the moment of explosion is approaching fast” and “we have actually approved the use of nuclear weapons against your country.”  And no one gives a shit.  We’re literally talking “page four news.”  Why?

Because it’s North Korea, and North Korea is a bunch of clowns.  Does that sound a bit harsh?  Yes.  Are we a little pissed off at their hijacking of our website last week?  Well, sure.  But there are also numerous well documented reasons why no one is scared of North Korea.  Don’t believe us?  Here are five, just off the top of our head.

Five Reasons Why No One Is Afraid Of North Korea 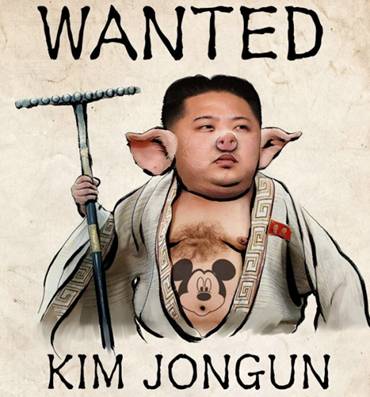 While most people speculate that North Korea has largely been posturing for a variety of internal reasons, no one has been quaking in fear of North Korea, primarily because their recent history has largely been hilarious so long as you’re not a resident of South Korea living with 12,000 pieces of artillery pointed at you by an entitled psychopath, or are, you know, a North Korean “dissident.”  While most North Koreans live in abject poverty, and that sucks, the public face of North Korea is nothing but hilarious.  So human rights groups can hem and haw about the dire condition of some 23 million souls unfortunate enough to be born in that rat’s nest all they want, but the fact remains that prominent not-wanting-to-get-nuked activists all at least agree that we are in no way afraid of North Korea for a variety of reasons.  These include…

When you’re making a video that tries make to your efforts seem heroic, and your enemies seem feeble and weak, you should at least focus on getting someone with a community college degree’s worth of film editing experience.  North Korea hasn’t learned that lesson, but boy do they love trying.  That’s why every time they release a new video, the response from the international community is a combination of “oh that’s cute” and “ha ha ha, oh man, hilarious.”

When someone threatens you, and you’re not even remotely scared, that person clearly lacks an intimidating presence.  If that same person spends money and time to make a video saying, “I will kill you, and this is how” and you’re still not scared?  That person is the most comically nonthreatening person in existence.  North Korea is that kid.

North Korea, in the past year, has released multiple videos where they talk about how they will destroy America.  The image above is from “Three-Day War” which shows Korean troops storming America, with the most impressive special effects consisting of stock footage of paratroopers jumping in the 70s overlaid on top of a picture of an American city.  Other videos showing America’s defeat include…

This is from “Firestorms” which has a narrator who sounds like a 13 year old boy trying to make his voice artificially deep talking  about, presumably, killing America with all the impressive weapons that Korea is seen using, which we might remember from back when C-SPAN showed footage from the first Gulf War on TV back in the 90’s.  While most of the video consists of actual footage, or stock photos, the fact that they chose to open with a painting of tanks shooting fire seems extremely depressing.  That’d be like one of our staffers making a youtube video at how great we are and starting it with a caricature artist’s depiction of us having sex with Kate Upton.  Which, come to think of it, is a picture we’re going to go and pay to commission right now. 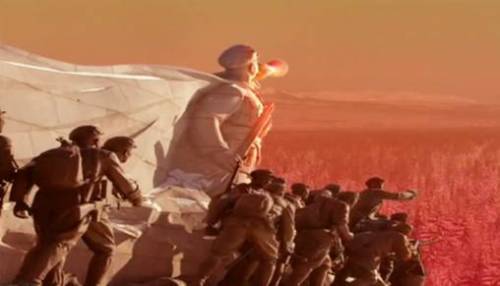 This is a music video that’s basically saying “Hey, we will die for Kim Jong-Un.”  Which is a great sentiment to let your people know that, as hungry and cold as you might be, there’s a fat guy with a bullhorn and a cape who looks suspiciously like he’s made out of stone who is willing to let you die for him.

Aww, North Korea.  Even when you’re nuking us from space, you’re just so comically inept.

Their Diplomats Sell Drugs And Their Citizens Smoke Weed Erryday. 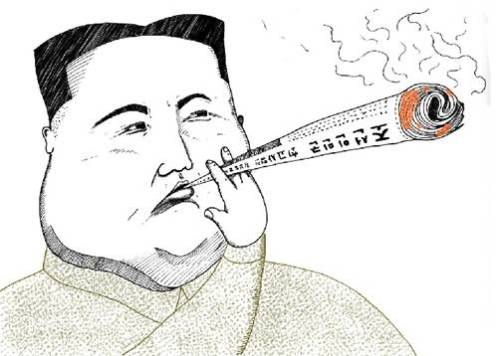 If there’s one thing that pot users and drug dealers have in common it’s that they tend to be poor at planning international military engagements.  Oh, and they tend to have access to drugs.  That one is probably an easier association to make.  The reason why we point that out is that North Korea likes to dip their toes in the drug dealing and pot smoking game so much that it’s hard to imagine them actually motivating themselves to start an armed conflict.  Say what you will about their tactics, or the size of their standing army, but it’s kind of hard to be afraid of the military of a country so hard up for cash they send their diplomats overseas with drugs with the task of raising funds for the national coffers.  Adding to this is the fact that the citizens and officials of North Korea supposedly smoke weed the same way Americans in the 50’s smoked cigarettes.  North Koreans are constantly getting high, and while it seems particularly cruel to give so many hungry people the munchies with nothing to munch, when you’re told that a country likes the gange that much you’d be within your rights to get the impression that they’re not exactly going to be that motivated as far as the “nuclear proliferation” department goes.

Listen, there are certain types of people who scare you when they’re on drugs.  If a country with nukes had a meth problem, yeah, we’d be terrified.  But doesn’t ever “don’t smoke pot” ad center on the fact that weed makes you lazy and unmotivated?  Have you ever heard of someone high marijuana biting a dude’s face off?  Have you ever heard a sob story about how someone had to blow a dude to get that next joint?  Of course not, so you’ll forgive us for not jumping at the threat of a nuclear armed nation full of Snoop Doggs.  Honestly, hearing that North Korea smokes so much weed just makes us think that they secretly spend their free time sitting in front of a TV laughing at videos of synchronized marches. 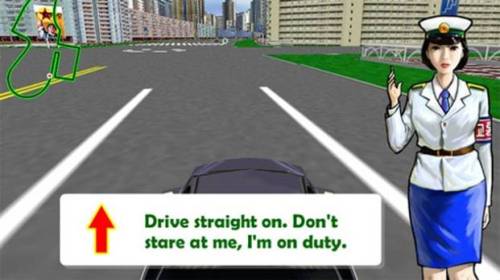 North Korea has a small but fledgling tourism industry, because if you’re a white office manager with some disposable income the only way you can make yourself seem interesting to people you meet at parties is if you can tell some jovial anecdotes about that time you spent a delightful week in a totalitarian nation while enjoying simple luxuries not afforded to the millions of starving people around you.  What’s that, you say?  They took away your cell phones for the week?  And there were some crazy large statues!  Wow, Frank, you’re so worldly!

Anyway, as a way to show how the unique and interesting qualities of Pyongyang, they decided to release a video game where you can drive through the barren, depressing streets of the city, picking up barrels of fuel and being constantly told to stop ogling the female police officer.  Watching an 8-minute video, the rules seem pretty simple.  The game ends if you run out of fuel, or if you hit three cars.  The latter would be pretty difficult to pull off, since if this video game is trying to let you know what Pyongyang looks like, then they’re succeeding (assuming Pyongyang is a desolated ghost town where there are only five taxis and one van in the entire city).

No matter what, North Korea has decided that this is what a “video game” should be.  So America, a country that’s favorite driving game involves carjacking and beating up hookers, should be worried about the actions of a country that makes you drive around picking up empty gas canisters and ignoring lady cops?  We didn’t think so.

Their Memorials Range From Crazy To Depressing

While many of you might think that this is a monument about the history of brutal penile torture, it’s actually how North Korea chose to celebrate the 50th anniversary of the establishment of their workers party.  While that seems like a semi-normal reason for a Communist country to build a monument, it’s pretty telling that this is one of the more sensible reasons that they’ve build a monument.  And one of the more normal-looking ones.

For example, there’s a monument that was made for the spot where Kim Jong-Il’s mom turned around when she realized she had forgotten to make lunch for Kim Il-Sung.   Let that sink in for a second.  They made a monument for someone going, “Oh crap, I forgot to make a sandwich for my husband.”  Even looking at a list of the more impressive looking monuments, it’s clear that North Korea builds things sort of like a seven year-old given an infinite supply of Legos.  Nothing here gives us a sense of “impending dread at the powerful infrastructure of our enemy.”  Instead it just feels like North Korea is that schizophrenic  trying to make the tallest sand castle at the beach.  Even when it ends up being impressive, it’s still sort of sad to watch.

No, seriously.  Because unicorns.  Back in 2012, North Korea’s state media released a story about how they had discovered a secret hideaway that was the burial site of a unicorn that was ridden by one of the founding fathers of the Korean Goguryeo kingdom.  Of course, North Korea claims that this king, Tongmyeong, is an ancestor of Kim Jong-Un, but we fail to see how “our historic rulers used to ride unicorns” would really register as “badass” for anyone outside of the Brony subculture.

They can’t even do mythical steeds right.  Granted, if you’re going to make up a fake archeological dig (and to those of you saying “well, maybe it really is a unicorn skeleton from the past” you need to turn off your computer right now, sit in the corner, and think about what you’ve done) it’s not like you could have gone ahead and said you found, like, dragon bones or something…but they absolutely should have gone ahead and said they found dragon bones.  The long and short of it is, you gave your ancient king a sissy animal to ride.  So if the most badass fictional animal you can think of is a unicorn why should we be afraid of your equally fictional “nuclear weapons that can reach Washington D.C.”?

(but seriously don’t nuke anyone, you crazy people)