We here at AFFotD have often paused to step back and applaud the lunacy of those inventive Americans who come up with products no one needs and submits them for patents.  And while many of these products never will see the light of day, at their best they show America’s intrepid creativity, and at their worst remind us that Jigsaw probably took the time to submit most of his torture devices for official patents.

Today we’re going to focus on that latter group.

While patents tend to range from “useful” to “absurd” there is a subset that falls into the “terrifying” category.  Primarily because these devices were clearly invented by serial killers who had to really stretch to find a non-murder use for their products.  But their illustrations speak for themselves, unlike their poor victims who are currently fruitlessly shouting at the soundproofed walls of these inventor’s kill rooms.

Hold onto your hats, America, shit’s about to get dark.

The process of getting a patent through the U.S. Patent Office is arduous and complicated.  Yet there are millions upon millions of patents that have been granted over the years.  While most Americans are content sitting on their recliners and saying, “You know what, it’d be nice if I didn’t have to get up to go to the bathroom” the actual process of inventing such a thing would be far more difficult, involving math and drawing tiny numbers.  Which means that most people submitting patents are either truly dedicated to their vision, or are desperately looking for a way to throw police off their scent when detectives show up asking why you have a collection of cattle-prod-knives.  That’s why we constantly see the Americans who fall in the latter category coming up with such transparent explanation for devices that are clearly used for torture murder.

Patent Name:  Device For The Treatment Of Hiccups

This patent was issued in 2006 to Philip Charles Ehlinger, Jr., who, judging by how he thinks you cure hiccups, probably treats night terrors by locking you in a box filled with scorpions.  This product, which looks like a combination between a muzzle and a portable curb-stomp device, treats hiccups much the same way Nurse Ratchet treated malcontents—with the cleansing power of electricity.  Listen, we get that hiccups are a pain in the ass, but we’d have to imagine hiccupping is preferable to “being electrocuted while you drink water against your will,” which is what this cup does.

It seems that Ehlinger left out the straps to affix this forcibly to your face out of his design, but rest assured, they exist.  We’re surprised this product hasn’t appeared in any horror films yet, to be honest, given the sheer psychological terror of imagining someone being forced to half-drown while being constantly zapped by electricity.  Now, due to legal reasons, we’re not saying, “Philip Charles Ehlinger, Jr. is the only person who has ever used this product, and he has killed every mailman that’s worked his route since 2006,” all we’re saying is, isn’t it a little strange how many post office workers have gone mysteriously missing in the last six years? 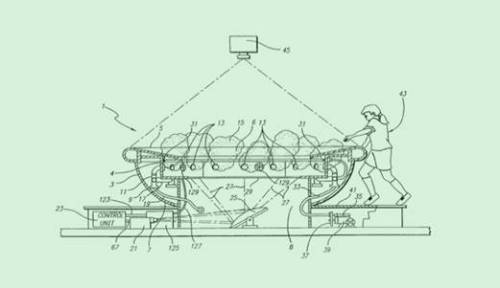 This product had multiple inventors, and only took a year and a half to get its patent approved.  What we don’t understand is how William George Adamson and Donald Lewis Updyke, Jr. haven’t been arrested yet because they clearly eat children.  They describe the product as an entertainment device, for carnivals and the like, where children can get close to fog and steaming water to interact with a giant bowl of soup.  We’ve seen more convincing attempts to trick someone into being soup from Elmer Fudd.  Notice how even the arrow pointing to that plump, briny child in this picture looks like it’s trying to push him into the soup.  In you go, you delicious scamp you!

The description for this product basically consists of the inventors saying, “Just, okay?  Just look the other way on this and say it’s for amusement parks or some shit.  We know that no child in the world would be enthralled by a giant mechanical fake bowl of soup, just, okay?”  And honestly, if your child is the one child in America who actually would get excited at the prospect of staring into a giant interactive bowl of soup, they deserve to be dinner.  It’s called Darwinism, look it up.

We should also point out that this patent actually got corporate backing from Sony, but honestly that doesn’t surprise us.  If anyone were to bankroll a giant interactive bowl of soup, it might as well be a giant Japanese corporation, right?

Actual Purpose:  “It Puts The Lotion On Its Skin Or Else It Gets The Hose Again.”

This is an older one, being filed and approved in 1969 by Gyda Hallum, best known as “Horrific Hallum,” who was responsible for dozens of murders using scalding water blasted at high pressures (citation needed).  The most succinct way to describe this invention would be “Human Car Wash” but the most realistic way to describe this product would be “OH GOD WHAT IS THAT WHY AM I IN A DAMP BASEMENT HOW DID I GET HERE AND WHY DOES EVERYTHING TASTE LIKE ETHER!?”  And let’s not forget the most eerie thing about this whole illustration—look at numbers 80 and 82.  The single chair in front of a control panel.  Just so you can imagine Gyda Hallum sitting there, expressionlessly watching you.  With those eyes.  Those dead, cold eyes.

Nope.  There is absolutely no innocent way you can explain this product.  None at all.