The Most American Restaurants of: CHICAGO

America loves to eat.  That shouldn’t come as a surprise to anyone.  When you live in a country that has 14,000 McDonalds, 7,500 Pizza Huts, and 6,500 Dunkin’ Donuts, you know that you have a pretty large population of people who live to stuff their faces.  But while fast food chains are appropriately American, getting you unhealthy food quick enough that you can fat fat fatty FAT, it is truly the local American restaurants that are able to really embrace American culinary ideals.  Because sure, if Hardees wants to make a burger with twice your daily allotment of fat in it, people are going to flip their shit, but if someone has a heart attack in the midst of eating a 6,000 calorie burger, it’s fucking awesome (unless that man’s family is reading this, in which case we salute him for going down like a fucking boss).

That’s why we here at AFFotD are starting our latest American feature—the most American restaurants of major American cities.

So when we think of cities that thrive on unhealthy food and have so little shame that we’re pretty sure veganism is a considered a misdemeanor by its police force, we think of the one city that we’d like to start this segment out with.

The Most American Restaurants of:  CHICAGO 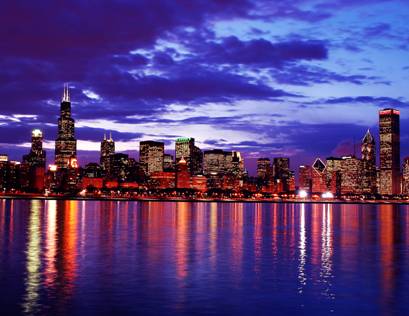 Chicago approaches food like a morbidly obese gourmet chef: they go out of their way to make foods as delicious as possible, while making sure it’s about as healthy as chewing on a stick of butter.  Think about the types of food that Chicago has either invented, or perfected.  The Chicago-style hot dog is truly perfection (which is why there are more hot dog stands in the city of Chicago than Wendy’s, McDonald’s, and Burger Kings…combined), Italian Beef is a soggy, meaty, peppered thing of glory, and when New Yorkers shut the fuck up about their pizza (oh yeah, it’s really big, and you can fold it, good for you) Chicago’s pizza lets you feast while every other city implores that you merely nibble.

So it should come as no surprise that Chicago has some of the nation’s most American restaurants.  And we at AFFotD salute these fine establishments, such as… 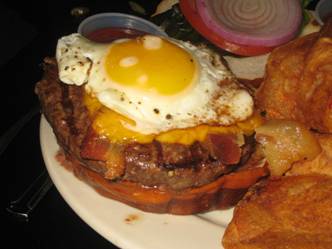 Many Chicago residents know Kuma’s Corner as “that death metal with the incredible burgers where you have to wait forever to get a seat” and that’s fairly accurate.  The bar blares metal, will not take music requests, and features rules like “We will not ‘put on the game, bro.’”  There are no reservations, so if you go during a typical lunch or dinner hour, you’ll expect to wait a solid two hours before you get a seat.  And you all have to wait- when Lady Gaga decided to try the place out, she had to wait like everyone else.

So why would this restaurant be so American?  After all, heavy metal is hardly unique to America, and waiting several hours to get your food actually might cause you to burn calories during a time where you should be stuffing your face.  Well let’s just take a look at their menu items, shall we? 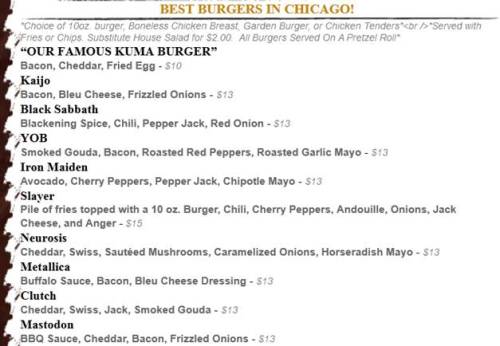 That’s just a small part of the menu.  Just look at that.  Their most basic hamburger has bacon, cheddar, and a fucking fried egg on top of it.  Yes, all the burgers are named after metal bands.  And yes, your eyes should absolutely stray down to the “Slayer.”  That is a pile of fries (and notice how the menu specifically does not call them “French Fries”) topped with a 10 ounce burger patty, chili, peppers, Andouille fucking sausage, onions, cheese, and anger.

Let that sink in.  These burgers are glorious, there are about twenty to choose from, and they come on a pretzel roll (which science has proven is the best way to serve a burger) and the only one that doesn’t come with that roll is just fries, burger, chili, and anger.  God fucking damn it, we love this so much.

They have no problem getting you drunk, either.  So while you wait for your seat, there’s plenty of beer to choose from.  Oh, and Jack Daniels on tap.  Well done, America.

No, Diner Grill is not fancy enough to have its own “website” outside of yelp reviews.  It’s just a standard diner (which has the benefit of being across the street from a bar that lets you bring in outside food) but the glory of the Diner Grill is that it is the best representation of American diners.  It’s open 24 hours, the man behind the counter looks like he’s spent some time in prison in the 70’s and clearly doesn’t give a shit about how drunk you are when you come in there, and when you ask them what’s a “Slinger”, they’ll say “Diet Food.”

Oh, you want to know what a Slinger is, now?  Well, it’s basically the diner equivalent of Kuma’s Slayer burger.  Check it.

While the Diner Grill didn’t invent the slinger (it’s not even a Chicago-based food:  the Slinger originated in St. Louis) that doesn’t in anyway diminish the American manner in which they will destroy your stomach lining.  While the Diner Grill might simply advertise the Slinger as “Don’t Ask/Just Eat” we can give you a fair rundown right here.  You start with a plate full of hash browns (which science says can only be cooked to perfection in a diner) and you place two hamburger patties on top of it.  Cheese goes on top of the patties, and then, you take two sunny-side up eggs to place atop the cheeseburgers.  All of this is doused in chili and onions, because fuck you, arteries, this is what you get for making it so we run out of breath every time we go up a flight of stairs.

As far as food goes, The Wiener’s Circle is not where you want to go for the best hot dog in the city or city limits.  The CheddarBurger/Cheddar-Fries approach was borrowed from Poochie’s up in Skokie, and Poochie’s is a far better culinary decision.  Where The Weiner’s Circle excels, however, is in the abuse dished out to drunks on a nightly basis.  Yes, this little stand is open until 5 in the morning, and has become a default Chicago destination for Chicagoans to go to after an evening of getting drunk.  Why is that?  Because they specialize in hiring a staff that will take great pleasure in talking shit to the drunk patrons (and who, for a 20 dollar addition to the tip jar, will show you their boobs.  This usually is not a good thing.  Just trust us on this.)

But just thinking about this concept makes us proud to be American.  There was a niche in the market, and The Weiner’s Circle filled it.  That particular niche?  Middle-class, drunk white people that wanted to eat char-grilled hot dogs and French fries drenched in a cheddar spread while getting insulted by black women.  But just because this establishment isn’t as much about the food doesn’t mean you can’t find some gloriously American purveyors of encased meats…

Pro-tip:  If the first thing you see (after an hour and a half long wrapping outside the building) when you enter an establishment is “There are no two finer words in the English language than ‘Encased Meats’ my friend” that is America’s way of telling you “you’re home.”

Hot Doug’s was founded by Doug Sohn, a graduate of a culinary institution who decided to create gourmet cuisine at affordable prices.  The result is nothing short of a constantly changing menu of “oh shit, now I’m hungry after reading this.”  While Hot Doug’s does offer the standard array of hot dogs, corn dogs, polish sausages, and numerous other things to clog your arteries, the real brilliance of the food can be found in the duck fat French fries (only available on weekends) and the absurdly decadent sausages.

Say what you will about America (…who’s saying anything bad about America?) but the fact that eight dollars can buy you a sausage made out of ribeye steak, with farmhouse cheese, chimichurri, and crispy fried onions on top is a wonderful thing.  Even our very own [REDACTED] stopped in briefly when he temporarily escaped from our offices.

Of course, our list of Chicago has to have at least one pizza place.  And…while there are a lot of great options to choose from, we ultimately had to decide on…

Of all the unhealthy, American pizza locations in Chicago, why did we go with the one that has been crudely franchised into a series of restaurants that pale in comparison to the original (Seriously, “Uno’s Chicago Grill?”)?  Well, given that the pizza was good enough to spawn cheap imitations is a good reason.  Another solid reason would be that Uno’s fucking invented Chicago style pizzas.  But we’ll have to go with the fact that this pizza is by far the unhealthiest of any establishment, with their personal pizza setting you back 2,300 calories and 160 grams of fat.  Goddamn it that’s a thing of beauty.

Of course, this list is hardly exhaustive.  There are literally hundreds of unique ways to get fat in Chicago, but we had to stop adding to the list once our food critic, John Goodman, had to get carted to the hospital in a wheelbarrow.  But we’ll give him, and the rest of our staff members, some time to recoup before we go after the most American restaurants of the rest of our fine urban centers.  New York?  Sure.  LA?  Assuming we can find some shit without goddamn alfalfa sprouts on it, why not?  Baltimore?  Well, we didn’t make the complete series of The Wire mandatory viewing for our staff for nothing, did we?  But if you’re too impatient for us to reach your town, you at least know you can visit Chicago and confidently eat yourself into a food coma.  And not those cute “Oh I ate a lot so I need a nap” food comas.  We’re talking about, “I’m sorry, but we have no idea when, or if, your husband will ever wake up again.”  Now that’s a food coma.