“Goddamn it, you’re right.  I AM delicious.” 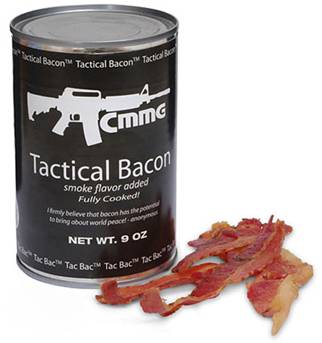 When someone goes up to you and asks, “What is the most American breakfast food imaginable” you’re never able to respond because your mouth is jammed full of delicious bacon.  To say that America is obsessed with bacon is like saying that John Hinckley, Jr. only had a “small crush” on Jodie Foster.  Whenever there’s a heart attack in America, the Bacon Council smiles wryly and adds a tally to a list somewhere.  Hell, there’s a group about bacon as a religion on facebook.  We love bacon because, unsurprisingly, America does bacon different and better than every other nation.

While bacon in itself is simply a cut of pork that’s been cured (usually in brine), many nations use “leaner” cuts of meat for their bacon, where America says “fuck it, what’s the fattiest part of a pig?  The pig belly?  Makes sense, let’s use that shit then.”  This is why English or Canadian bacon is nothing more than a salty pork chop, while American bacon is a glorious piece of art streaked with more fat than a bar of soap made in Fight Club. 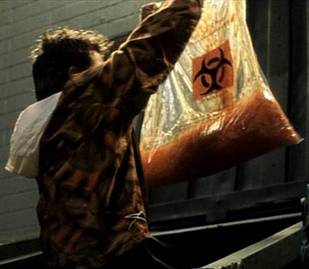 “I don’t know, I’m partial to crispy myself.”

And while bacon deserves its own Fun Fact, we here at AFFotD feel impelled to talk about a phenomenon more specifically American than bacon itself.  We of course are referring to the American habit to make everything taste like bacon.  It’s the greatest thing to happen to capitalism since factories.  Every day, an executive says, “Let’s flavor this like bacon,” and when a subordinate asks, “why bacon?” he responds, “Because fuck you, you’re fired, bacon is delicious.”

It most certainly is.  With that in mind, we’re here to present you with…

America has developed a deep fascination for bacon.  There are a lot of theories for why bacon, and bacon flavorings, have skyrocketed in popularity but most of them start with “Um because it’s fucking delicious, that’s why?”  And since fatty and salty foods are as addictive as heroin bacon is delicious, America goes out of their way to share the wealth.  Sometimes that leads to the Wendy’s Baconator, sometimes it leads to bacon bits becoming an integral part of a salad bar.  Or sometimes, it can lead to someone inventing… 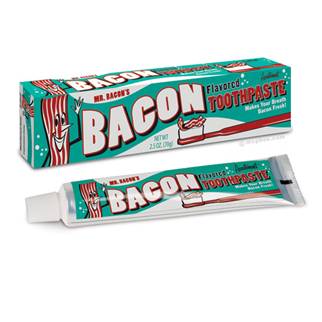 “Brushing your teeth with a strip of fried bacon is tricky.  If it’s too crisp, it will break apart as you brush and if it’s too limp you won’t be able to remove any of the plaque.”

Memorize that phrase, readers.  When the police bring you in for questioning for that double homicide, just repeat it over and over until they find you not guilty by reasons of insanity.  This is the perfect product for someone who has had to think to themselves, “My girlfriend is a vegetarian who doesn’t want me eating meat while we’re together, so I want to piss her off as much as imaginably possible the next time we kiss.”  The product doesn’t tell you if they actually use meat in the product, probably because if you’re the type of person that wants to slather their teeth with bacon flavored paste, you’re not going to really question what they put in it, are you? 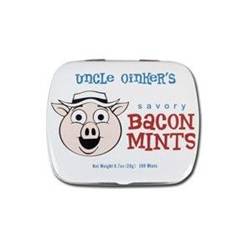 Remember how  when we talked about Bacon Toothpaste we felt the need to point out that it’s not as gross as it sounds because it’s not mint flavored as well as bacon flavored?  Well open mouth, insert foot, cue 1980’s laugh track.  There’s something inherently oxymoronic about calling a tin of Bacon Mints “savory.”  You can choose savory (bacon) or sweet (…mint) but if you make the bacon minty you’re no longer allowed to call it savory.  It’s in the Constitution, look it up.

While we’re 100% behind the idea of making your mouth smell like bacon for little to no reason other than “uh, bacon?” we have to admit there’s something counter intuitive about taking a mint that’ll make you smell like you just had sex with Oscar Meyer.  Under “Product Features” on the Amazon.com listing (only two left in stock!) there are only two specific aspects to this product, one of which is “Tastes Like Bacon with Mint MMmmmm!”  Now call us crazy (“okay, crazy”) but doesn’t that sound like something someone would whisper into his poodle’s ear while starring down at the woman imprisoned in a giant pit in the floor of his home? 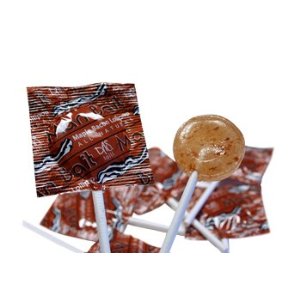 Okay we’ll admit it, the previous two items don’t really strike us as particularly “delicious.”  Crazy?  Absolutely.  Delicious?  Eh.  Listen, we love bacon as much as the next person whose arteries are 75% plaque, but if we wanted our teeth to taste like bacon as we go to sleep we’d dig into the bowl of bacon strips we keep at our bedside table, and if someone offered us a “bacon mint” we’d be pretty sure we were being handed a Roofie.  We’re still not totally convinced that the Bacon Mints are not Roofies (in which case, holy shit, three bucks for a hundred Roofies?  That’s got to be a good deal, right?)

But that being said, we would absolutely eat the ever loving shit out of a Bacon and Maple Lollipop.  How does that not sound delicious?  Bacon?  Maple Syrup?  It’s breakfast, only with more sugar!  It costs 45 cents, meaning that you’ll probably spend 5 times the purchase price to ship it, but that seems like a fair value don’t you think?  And it’s got real bacon in there, just…floating in the maple syrup.  The only thing that gives us pause about this product is that they called it “Man Bait” which leads us to believe that this is some product that’s only intended for the LGBTQ community.  And if that’s the case, come on guys, that’s not fair, let us have some Man Bait.

We know exactly how that last sentence sounded, and we absolutely still stand by it. 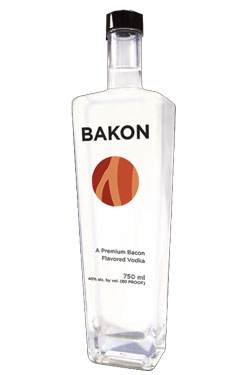 Bakon Vodka actually has the slogan “Yes, Bacon Flavored Vodka.”  Apart from the fact that Bacon-Flavored Vodka has such a beautiful ring to it a few of our staff members have been brought to tears, we do enjoy the fact that this company’s slogan literally is them going, “no, we’re serious.”  It’s the same response that you’d get if you asked someone, “Oh hey, what’s with the fat lip?” and they’d respond, “It’s a herpes sore,” and you’d laugh and go “…ha, uh, seriously?” to which they say, “Yes, herpes sore.”  We can only guess that they came up with this slogan when they tried going to investors and they responded to the pitch by asking what the serious idea was.

Of course they were serious though, because Bacon-Flavored Vodka is a beautiful, glorious invention.  Granted, our office has previous had some division over the concept of flavored vodkas, but there’s one thing we can all agree on.  A Bloody Mary made with Bacon-Flavored Vodka sounds incredible, and the only way we could have imagined making bacon even better would be to either make it alcoholic or to coat it in a nearly lethal dose of PCP.  Fuck yes.

Because the more we think about the slogan, the more it’s definition changes.  It’s not defending the nature of the product, it’s telling you- “Fuck yes.  Bacon Flavored Vodka.”  God bless, Bakon.  But, let’s net heap all the bacon flavored booze praise on this one company, because this is America dammit, and we wouldn’t be America if some glorious bastard didn’t decide to make… 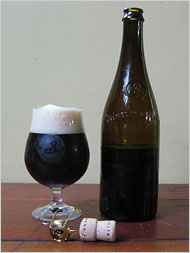 Smoked beers are not an uncommon sight to find at certain beer-centric bars, and most people describe those beers, which smoke the barleys before using them in the brewing process, as tasting “like bacon.”  That’s not what we’re referring to when we talk about the beauty of Bacon Beer.  It’s real, people.  Beer that uses bacon in the brewing process.  Literal Bacon Beer.  One example was a limited edition beer made by Brooklyn Brewery called the Reinschweinsgebot, which is German for “This is America goddamn it of course we don’t speak German.”  Brewmaster Garrett Oliver took a brown ale, aged it in bourbon barrels for nine months, before he added bacon fat, solidified the fat within and filtered it out.  Just for good measure, the barleys were smoked in the same room as bacon was being smoked, because if you’re going to make a Bacon Beer you’re not going to do it half assed.

Thankfully, Warren Combs, a brewmaster at the San Juan Brewing Company, makes a bacon flavored pale-ale (by suspending oven-dried bacon in a previously brewed beer), which goes that if you look hard enough you might be able to find places that make their own bacon beer as well.

Or, you know, you can go to Brooklyn and hunt down Garrett Oliver, locking him in your house and making him brew the beer for you in some sort of alcohol-fueled Misery kinda situation.  Your call.

Either way, once you’ve gotten good and liquored up on Bacon-Flavored Vodka and Bacon Beer, you might find yourself feeling a bit Randy, at which point you’ll need… 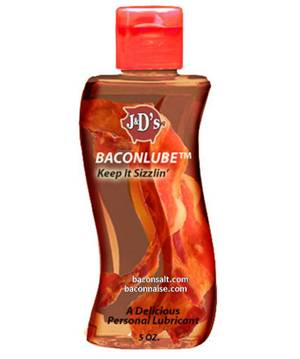 This product tells us so much about its user, and yet raises so many question.  What would the combined weight of a couple who demanded that their lubricant be flavored like bacon be?  450 pounds?  500?  Also, how little care would they have for the physical well-being of their genitalia if they decided to lube up using a product brought to you in part by the same company that makes bacon salt and bacon mayonnaise?  They’ve not been able to see their genitals for years, it’s not a problem.  What would a bed smell like after this product has been used in it?  Shame and cholesterol.   Who on Earth would use it?  Well, Bacon Salt Blog commentator “Mykie” says “Hello, if you are looking for testers for this fine product, my wife and I would love to volunteer.”

But don’t worry, J &D’s is ready to take full responsibility if their product leads to the birth of a 13 pound baby.  That’s why they’ve got… 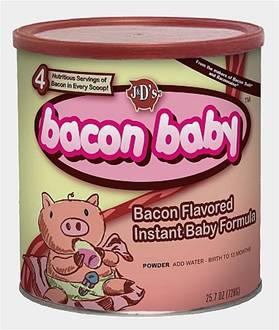 You’d think most parents would be terrified, or at the very least concerned, when the description of a product that you’re supposed to feed to your baby for the first 12 months of its life contains joking hyperbole.  You’d think that they’d never consider using a product that makes a joke about the product’s “test subject” outrunning a cheetah at the age of 3 in a manner that sounds like a rejected writer for Groupon.

But fuck it, this is America, if there were a way to feed our babies bacon powder how could that possibly affect future obesity rates or alter your child’s development in anyway?  Seems like a slam dunk to us. 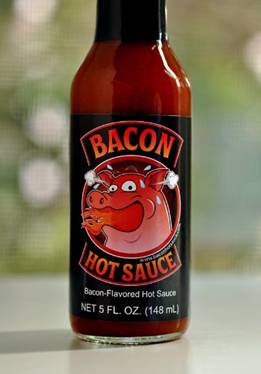 Bacon flavored hot sauce.  Every once and a while, there is a moment of brilliance that allows some genius of soul the chance to have an epiphany that, while it seems so obvious, will rock the bedrock of society.  Sir Isaac Newton’s realization of gravity.  The Peanut Butter and Jelly Sandwich.  And finally, making hot sauce that tastes like bacon.  Sometimes you want your food to taste like bacon, and sometimes you want your food to be spicy.  Of course.  Bacon Hot Sauce.

Now if you excuse us, we have a Hot Sauce company to invest in.