“And from whence the savory and sweet shall be wrought, it’ll probably taste awesome, like a bacon lollipop.”

We’ve previously informed you of all the glorious things that now exist in bacon flavored varieties.  Yes, Bacon is the Neil Patrick Harris of foods- it’s impossible not to like it, unless you are a deeply morally flawed human being.  But when we talk about bacon, we forget about the entire subset of foods that bacon belongs to, and it’s interaction with other culinary areas.

Yes, if “Savory” were a cycling team, “Bacon” would be its Lance Armstrong (sorry, someone bet us we couldn’t make a cycling joke or a Lance Armstrong joke without mentioning steroids or testicle counting, so we had to make sure to win it.  We really needed the twenty bucks) but it’s important to remember that savory food items are an important part of American culinary creative process.  Because Savory allows us to bring in the sweet, and when the two are combined you get some glorious, completely unhealthy American food iteams.

Not all savory and sweet combinations have to use bacon.  But just like not all basketball teams “have to” have Derrick Rose, but it certainly helps you stay competitive.  That’s why it only seems fit that we can kick things off with…

The fast food chain Jack in the Box has made news recently for their terrifying mascot addition of a bacon milkshake to their menu.  We admittedly were dismayed to hear that apparently the fast food mogul’s combination of Daniel Plainview and pork fat was apparently less than great, until it was revealed that an artificially-flavored syrup was used instead of real bacon, which to us seems about the same as having sex with a cardboard cut-out of Adriana Lima.

Of course, just because a hyped, high-profile event can fall flat, that doesn’t mean that the entire concept is to be written off.  After all, Slater’s 50/50 of Anaheim Hills has long ago jumped on this sweet and savory combo platter.  This is where the true art form of bacon milkshaking (hopefully “bacon milkshaking” will be 2012’s version of “bedazzling”) can appear, with bacon chunks on top, and bacon bits throughout the maple vanilla base, and it manages to pull it off to perfection.  So while some of you are no longer reading because you’ve just purchased a plane ticket to California so you can get this concoction in your belly immediately…actually we have nothing to add to that.  Get it, get it now.  You can read the rest of this later.

But not everything that is both sweet and savory is going to be both sweet and bacony.  But that doesn’t make them any less impressive.  Just look at… 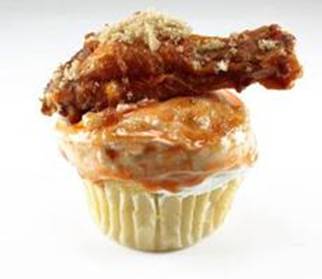 Goddamn it, we love the Super Bowl.  Sure you’re not going to remember much of the game between the heavy drunk feeling and the inevitable food coma, but it does help America really pig out in new and creative ways.  Coccadotts Cake Shop in Albany, New York decided to attack stomachs everywhere by offering the chicken wing cupcake– a combination of cornbread and bleu cheese frosting, with a chicken wing placed on top.

While this sound gloriously delicious, it also is comically impractical.  Trying to eat a cupcake that has a chicken wing on top of it is a lot like trying to have sex in an airplane—at first blush, it’s an awesome idea, but in practice, it’s awkward, uncomfortable, and the bone’s probably not going to end up where you want it.  But no matter how many people will tell you, “Oh yeah, I tried it, it’s not as great as you’d think” you don’t care.  You’re starring at that picture and ready to buy the fucking thing.  We’re right there with you.  Of course, not all sweet and savory concoctions are unusual or have limited availability, some of them are tried and true methods that have been used by Americans for years. 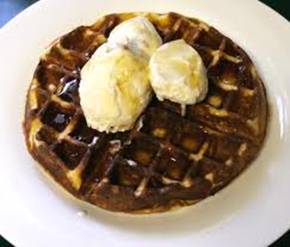 While you might take issue with this food being considered both savory and sweet (since waffles are technically on the sweet end of things as far as breakfast foods go) we will respond with a link that adds bacon to the mix because fuck you if you thought bacon wouldn’t make any more appearances on this list.  The idea of mixing ice cream and waffles is one that initially baffles many Americans who view waffles as a breakfast food and ice cream as a dinner desert.  Granted, a healthy percentage of you said, “Of course this is a good idea, it’s pretty much the same concept as pie a la mo…sorry, almost said French there, I meant to say pie with ice cream on it.”  And that is true (and good job catching yourself on that Frenchy thing).

To be honest, this is more of a place holder- most of you are likely familiar with this food combination, and if you’re not after your initial “how can it be!?” response, you’ve settled in on a “oh yeah that sounds pretty good” mindset.  Moving on.

America hates salads so much that we have been known to pour a bag of sugar in a bowl and call it a salad because fuck you lettuce, that’s why.  One step closer to salad than a bowl of sugar is the Snickers salad, which makes this list because we’re pretending that this food can be considered “savory” with the mere existence of the word “salad” in its description.

So here’s a recipe if you want it, but just trust us when we say that this is basically cream cheese, sugar, cool whip, Snickers, and some granny smith apples all mixed together.  For those of you who feel that the cream cheese is a cop out, you can replace it with vanilla pudding if you so desire.

You know what?  At this point, we’re a little too distracted to keep digging up sweet and savory dishes.  We’re just going to stuff our face with as many salads-that-are-actually-

smooshed-up-candy-bars as we can.  We trust you’ll understand

This entry was posted in America's Best Foods. Bookmark the permalink.