“I am not saying that I am more manly than Bull Riders.  But then again, do you hear them having to deny such claims about me?”

No back story is necessary.  Look at this fucking picture. 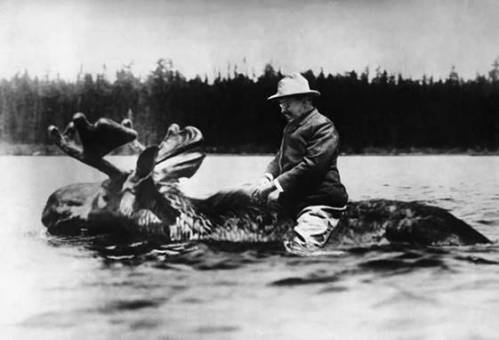 Just look at that fucking picture.

Once our staff saw this picture, we realized that the only American way to respond to such epic glory was to discuss the lost generation of Moose Wranglers, of whom Teddy Roosevelt clearly was their leader.

Moose Wrangling was a short-lived profession in the early 20th century.  It was invented by Teddy Roosevelt, whose motto in love was much the same as his motto for nature, “I don’t care how big it is, I’m still riding it.”  Due to the sheer borderline-suicidal reckless danger involved in being a Moose Wrangler, combined with the fact that there was absolutely no financial gain to be had by riding a Moose, the profession died out shortly after Teddy Roosevelt became Mount Rushmore.

The first instance of Moose Wrangling occurred as a happy accident, as Teddy Roosevelt, while out Moose hunting, decided to climb upon an unsuspecting Moose to get an effective “up-close and personal” kill shot on the beast.  Before he had a chance to pull the trigger, the 1200 pound behemoth began to run, instinctively knowing where Roosevelt wanted to go.  Basically he was like that kid in The Neverending Story.

Roosevelt eventually recruited some of the baddest of badasses throughout the Wyoming area (a land with a low population, but the highest number of badass woodsman per capita in the United States) where he formed Roosevelt’s Wild Wrangling Moose Society.  When a news reporter asked Roosevelt what possible reason he would have to recruit men to ride around on Moose, Roosevelt replied, “Shut up, that’s why.”

Roosevelt’s Moose Wranglers traveled all across the nation, where they performed a wide assortment of good deeds, like assisting in the establishment of one of America’s first Indian Reservation casinos (shortly after banishing the tribe to an Indian reservation).  They saved a few kittens from treetops, and had a moderate role to play in the Allied victory of World War I.  But all good things eventually come to an end, and as the last of the Moose Wranglers hung up their specialty-made Moose saddles (only Teddy Roosevelt was man enough to ride without a saddle), they knew it was the end of an era in America.

An era where people rode Moose through rivers just for the flying fuck of it.