“I’m not saying I’ll gut you like a fish but…well, no, that’s exactly what I’m saying.”

After yesterday’s Fun Fact regarding Davy Crockett, it might come as a surprise to see another Fun Fact about a similar topic.  Why?  Maybe it’s because today is  the 175th Anniversary of the beginning of the Battle of the Alamo or something (wait, we have to check that.  Holy shit, it is?  We were just pulling that out of our asses…)  And it could be because the people behind the Alamo were some of the greatest American champions of all time.  Or maybe, just maybe, it’s because Jim Bowie was such an unmitigated badass who invented a knife best suited to murder polar bears and decided to use it on people that we couldn’t wait any longer before giving him his proper, AFFotD due. 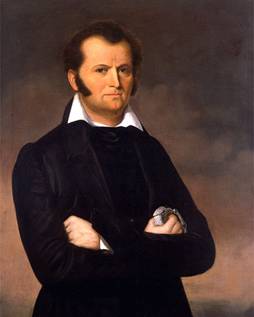 Plus he kind of looks like John C. Reilly

James Bowie was born in April of 1796, the ninth of ten children.  His father had been wounded while fighting in the Revolutionary War, where he met a younger woman that nursed him back to health, who he eventually married.  This means that every time pornography is made of a nurse and a patient, they are actually faithfully reenacting the conception of Jim Bowie.

Jim Bowie was the first, and only, documented case of the infant performing his own Caesarian Section, baffling medical experts as the procedure would not be officially recognized until Teddy Roosevelt’s “I’m…just so tired” mother invented it some half a century later.  This would remain the first and only time he ever stitched someone back together after slicing them up, because he was a good boy and loved his mama.

Jim Bowie had a normal early 19th century Childhood in Louisiana, where at a young age he had to learn how to plant crops for his family, while an Indian friend taught him how to rope alligators.  Fucking seriously.  Jim Bowie liked knives in a way that, if he were cast as a member of a bank heist crew in a crime drama, the audience would know right away that this was the guy who was going to take things too far and fuck up the whole deal.  If you ever tried to prepare a meal with Jim Bowie, and handed him a butchers knife to chop up onions, he would look around cautiously and probably say, “Just give me a name and an address and I’ll take care of them for 5 G, large.”  Jim Bowie is recognized as being responsible for both the popularity of the Bowie knife and the invention of David Bowie (as mentioned yesterday). 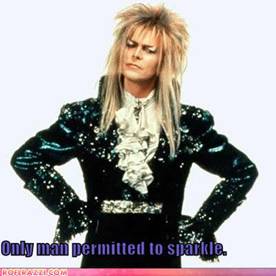 When Jim Bowie was a teenager, he was walking through the woods with his brother Rezin Bowie, when they stumbled upon a clearing, devoid of any sign of nature.  Instead, there was a rock, and plunged inside of it was a blade, nine inches long and one and a half inches wide.  Jim Bowie, thinking, “…This looks like it cuts real good,” grabbed it from the stone.  A beam of light shot into the air, and Bowie handed the knife to his brother, and told him to have another one fashioned, so he can have a backup.  Engraved on this mysterious blade were the ominous words, “Oh shit man, look what you did, man!  Jesus Christ, Oh God!”  This was the phrase that Jim Bowie heard more than any other, since after he engaged in knife fights it was normally spoken by his victim’s terrified friends.

Rezin Bowie was tasked by his brother to duplicate this blade, but after much hardship and frustration, he was unable to find the final component that gave the knife its epic killing powers.  Finally, years later after Bowie had been named by most police forces as a “Person of Interest (Do NOT Fuck With)” Rezin was able to unlock the secret ingredient.  It was love.  No, just kidding, it was steel.  Rezin didn’t know much about blacksmithing, so it took him a while to figure that one out.

Using his trusty Bowie Knife, Jim Bowie’s legend truly began to form when Jim Bowie decided to display the power of his knife to a larger audience.  The Sandbar Fight of 1827 marked the first time anyone had seen Bowie bleed, but the sign of his potential mortality only made him far more frightening.  On September 19th, two men were slated to have a duel.  Bowie was there to support his friend, Samuel Levi “Is That Enough Names For You, Asshole?” Wells III, who was dueling against Dr. Thomas Harris “Jesus Christ, What’s With Names and the 1800’s” Maddox.  This in itself wasn’t that important, except for the fact that, supporting Too-Many-Damn-Names Maddox, was Norris Wright, the sheriff of Rapides Parish.

The previous Year, Wright and Bowie had begun a feud.  After Bowie had supported Wright’s opponent in the sheriff’s race, Wright, a bank director, made the bank turn down a loan Bowie had applied for.  While you might be able to, after a few drinks, defend the logic of “turning down a loan application from a killing machine who was born clutching a bloody knife,” Wright did not help matters when he then fired a shot at Bowie, who tried to murder Wright with his bare hands.  After Bowie’s friends held him back, a pissed off Bowie screamed, “I wasn’t saying, ‘Hold me back’ I was saying, ‘Hold down this fucker so I can kill the shit out of him’” and began carrying his knife with him at all times.  Seriously.

The duel of the ridiculous-19th-century-sounding-names ended in a draw, with both men missing each other.  At this point, according to etiquette, both parties would giggle and say, “Whoops!” and shake each other’s hand.  However, etiquette does not usually advise for other members of the group to try to shoot the shit out of Jim Bowie, mainly because shooting at Jim Bowie is like playing pin the tail on the donkey at a knife factory with a poor safety record.  If you’re not careful you’re gonna get stuck real bad.  And that’s exactly how that shit went down.

As the other members of the group observing the duel began fighting.  General Samuel Cuny, who had a dispute with a member of Wright’s party, Colonel Robert Crain, shouted over to Crain, “This is a good time to settle our difficulty!”  Crain turned and fired at Cuny and, proving he had a terrible shot and rotten luck, instead shot Bowie in the hip.  Screaming, “Aww, HELL Nah!” Bowie unsheathed his knife and lunged at Crain, who hit Bowie so hard over the head with a pistol that the gun broke.  Seriously.  Crain then killed General Cuny, while suffering a flesh wound he would later recover from.

As Bowie was on his knees from having a goddamn gun smashed over his head, Wright took a shot at Bowie and missed, before unsheathing a cane sword and impaling Bowie in the chest.  As Wright tried to pull the sword out of Bowie’s chest, Bowie said, “A…a little closer…” before grabbing his shirt and gutting Wright like a goddamn fish.  Standing up and yanking out the sword from his chest, Bowie stabbed by another member of the party.  Soon thereafter, a third man shot Bowie in the arm, to which Bowie spun around and cut off the shooter’s fucking arm, saying, “You shot me in the arm?  Well, you lose your arm privileges now, asshole.”

The fight lasted ten minutes, leaving two dead, including Wright, and four injured, including Bowie and all three of the people who attacked him.  Realizing, “Holy shit, I just shot Jim Bowie and then busted a pistol over his head, I’m fucked,” Robert Crain rushed over and helped carry Bowie away.  Bowie thanked him by not knifing him, instead saying, “Colonel Crain, I do not think, under the circumstances, you ought to have shot me.”  Fucking.  Seriously.

The doctors who had been present for the duel patched up Bowie’s wounds, one having said, “How he lived is a mystery to me, but live he did.”  When the doctor was informed, “That guy who sliced up those motherfuckers was Jim fucking Bowie,” the doctor retracted his statement saying, “Ohhhh, that makes a lot more sense.”

Bowie was pleased with how his knife fared in the fight, and as newspapers reported on the fight, both his fame and the fame of his knife grew exponentially.  At this point, an Arkansas Blacksmith named James Black presented him with a version of Bowie’s knife with a sharpened curved edge on the top of the blade, which he felt looked a lot cooler.  Bowie agreed, utilizing this knife as his primary Bowie Knife of choice, and this is the chosen design for Bowie Knives the world over.

Responsible for more utterances of, “Woah there, calm down, let’s just take a deep breath here” than anything other than incompatible people dating.

Once he recovered from his wounds (so, like, a few days, tops) Bowie decided to head down to Texas, where he could attempt some legally questionable land deals to get rich.  By 1828, he was maintaining permanent residency in Texas, then a part of Mexico.  He only headed to Arkansas to receive James Black’s version of his knife, and after receiving this knife in 1830, Bowie decided to test it out.  Heading down to Texas, he was ambushed by three men trying to kill him.  He killed each of these wannabe assassins, disemboweling one, nearly decapitating another, and splitting open the skull of a third.  Seriously.  Looking down at his newly blood-christened knife, he said, “That’ll do, knife.  That’ll do,” and continued on his way.

It was in Texas that Bowie became a figure in the Texas Independence War, despite various issues with the Texan army, who were hesitant to grant him officer status, and instead would only offer him field positions that kept him out of battle.  Bowie would not stand for that shit, since he had just lost his wife and children to a cholera outbreak, and was in a sort of Steven Segal vengeance mode.  Eventually, Bowie offered to lead volunteers for a defense of the Alamo. 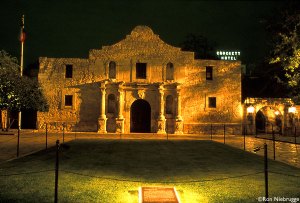 Bowie realized that a massive army was heading his way, but turned down the offer to retreat and burn down the fortress, writing, “We will rather die in these ditches than give it up to the enemy.”  As Santa Anna’s Army approached, the biggest blow to the fighters garrisoned in the Alamo was not the overwhelming odds, or critically low supplies.  It was that Jim Bowie came down with a mysterious and debilitating illness, leaving himself bedridden for days on end.

As the armies approached, a line was drawn in the sand by William Travis, who had taken charge of all the troops while Bowie was bedridden.  Everyone who crossed that line would choose to stay and fight, at which point Bowie made Davy Crockett and several others drag his bed across the line, because fuck you Santa Anna, that’s why.  Still unable to stand as the attack occurred, Bowie propped himself up in bed, emptying his gun into the Mexican soldiers who stormed into his room, where he finally died, clutching his Bowie Knife.

And so Bowie, like many great Americans, perished in the Alamo fighting to the last breath.  But his legacy lives on through his Bowie Knife, which is still responsible for more fools-who-don’t-know-their-place stabbings than any other knife, except for possibly the switch blade.  So next time you find yourself in a potential knife fight, and a Bowie Knife comes out, run.  Or, you know, run anyway because, you know, holy shit, dude has a knife.

8 responses to “Jim Bowie Will Gut You Like a Fish”