“I’ll get ya drunk faster than a pie’ll get yanked from a windowsill.”

While the America Fun Fact of the Day offices break numerous laws, regulations, and religious commandments on a daily basis (Hell, just to get into our lobby you have to punch the captured endangered Condor that we have caged up as a door handle) we tend to find it unnerving when our activities that we believe to be “legal” are, in fact, not.  In this case, apparently moonshining is illegal.  Not only is it illegal, it’s been explicitly illegal since the 19th century.  This was conveniently overlooked by the man who helped us install our moonshining operation, Marvin “Popcorn” Sutton, who was even more American than we could have possibly imagined.  And that’s saying something, because he looked like this. 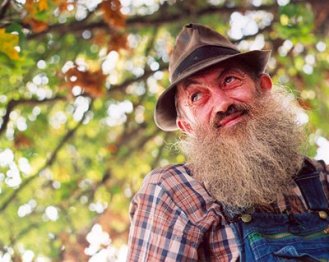 That beard is so glorious that OTHER beards live in his beard.

Marvin Sutton was born October 5th, 1946.  His father was a bootlegger, as was his father before him.  Legend has it that his mother was a bottle of whiskey (don’t worry, it had been aged for about 21 years, and the whole thing was completely consensual).  His ancestors were Irish-Scots, who brought their distilling practices to America, because America appreciates liquor better than anyone.  After moonshine was made illegal, the Sutton family continued their proud legacy of producing Hooch.    White Lightning.  Mountain Dew.  You know, delicious, potentially blinding whiskey.

Sutton was raised in Cocke County, Tennessee, which apart from having an absolutely hilarious name, is known as one of the four “Moonshine Capitals of the World.”  Popcorn, who had not yet received his famous moniker (stay tuned), often recalled that his first words, at the age of seven, was, “This whiskey tastes like my ass, pa.  Jack Daniels can’t sill for shit.”  This was the first time Sutton expressed an interest in the trade of moonshine.

Marvin Sutton received the nickname of “Popcorn” after he broke a popcorn machine with a pool cue while at a bar, and was forced to buy the bar owner a new one.  Despite the somewhat boring origin of his nickname, Popcorn embraced it, using it as his name on his car title, the deed to his home, and eventually beginning his practice of drowning his enemies in a silo filled with popped kernels of popcorn.  It’s widely believed that the worst sound you can ever hear is that of a man’s death rattle echoing in a silo as he drowns in popcorn. 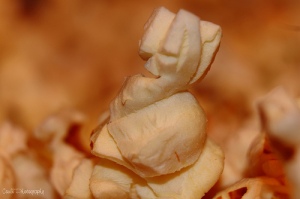 The last, most delicious thing you’ll ever see

Sutton began taking on the family’s business at an early age, and by the 1970’s he was arrested with his first moonshining charge.  Sutton was a perfectionist, pointing out that many moonshiners get dirty, galvanized metal for their sills, buying cheap supplies to set up the distilling process for less than 300 dollars.  As Sutton said, “It’ll get you drunk, but those sills will kill you.”  Sutton’s White Lightning was significantly higher-quality, and far less prone to errant explosions, as he invested roughly ten thousand dollars into his equipment (not too high of a price when a top quality moonshiner can produce 1,000 gallons of whiskey and make over $6000 dollars in a week).

While Sutton set the gold standard for moonshine, he also knew all the trade secrets, writing several books about moonshining, including, “Me and My Likker.”  For those of you assuming that a “Likker” is a piece of equipment used in moonshining, we’ll save you the trouble of taking a few shots and spending an extended amount of time around hillbillies- he’s referring to “liquor.”

There are ways to detect contaminated moonshine, or so we’ve learned from a combination of tough luck, poisoned interns, and an intensive seminar Popcorn led back in 2003.  Moonshine can have various toxins, especially from moonshiners that employ used automobile radiators, a practice that Popcorn frowned upon.  Of the various folk tests for moonshine, most involve lighting that shit on fire.  Pouring moonshine on a spoon and lighting it on fire can help you discover various toxins- if the flame is blue, the moonshine should be good.  Tainted moonshine would burn with a yellow flame.  If the moonshine was contaminated with lead, probably from a radiator, the flame would burn red, hence the totally-actually-what-they-say saying of, “Lead burns red and makes you dead.”  Another method of testing moonshine is to pour some with a little gunpowder, and light it.  If the mixture starts to flame, then the moonshine is at least 57.15% alcohol, and is strong enough to be drunk by a true American.  Of course, our favorite technique is to let an intern take a sip, and if they don’t go blind within the first thirty minutes or so, we should be fine.

To truly get a sense of Popcorn’s ways, we have to look no further than one of his favorite stories.  The time he got a frog drunk, just for the fuck of it.  Seriously.  Here’s what Popcorn himself had to say about it-

“Anyway here come hopping up to the still a damn big frog. I thought to myself ol’ boy I’ll make you drunk as hell. I had heard all my life that a frog will absorb things through its skin. So I got me a can lid and caught me some of that high shots and I dropped it slowly on the old frogs back. Real soon its throat started to swell up and then all at once that frog started singing like hell. When he stopped singing he flopped over in the leaves and didn’t move till I got done running that likker. I guess he passed out. Anyway when I come back the next morning to sweeten it back he was not there. I guess one good damn drunk taught him a lesson.”

We at AFFotD rarely like to break through the fourth wall, except for the five or so times per fun fact that we do so, but we cannot stress this enough.  How fucking awesome is that!? This crazy motherfucker got a frog drunk for no reason other than to see what a frog looks like drunk.  That is both the most balls insane and hilariously incredible thing we have ever heard of.  We want to keep a flask of whiskey on us at all times, just so if we stumble across a frog, we start pouring booze on it.  Since now we know that frogs can absorb drunk through their skin.  Because they are American. Apparently.

After his first brush with a law, Popcorn made a point to tell everyone that he no longer distilled alcohol, helping decorate a distillery themed Bed and Breakfast, while showing videos such as, “The Last Run of Likker I’ll Ever Make.”  We at AFFotD called bullshit, because he straight up brought us five hundred gallons of his moonshine for us to drink.  It was delicious, and we drank it in like two days.

Unfortunately, like all great Americans, sometimes they are cut down in their prime by forces that claim to be American, but don’t seem to understand America.  Though, “in their prime” is sort of subjective for Popcorn.  In 2008, Sutton was arrested after over 800 gallons of White Lightning was found on his property in a school bus (Sutton earns points for thinking of the most badass and ironic thing to store massive amounts of illegal liquor in).  At 61, Sutton was ailing of cancer.  When he was convicted, and sentenced to 18 months in jail, the judge denied his request to serve his term in house arrest, and ignored the petition with over 1,500 signatures asking he be pardoned.  That’s why, in March of 2009, Marvin Popcorn Sutton followed in the pioneering footsteps of Ernest Hemingway, and was found dead from carbon monoxide poisoning in the car he deemed his Three-Jug car, since he purchased it for three jugs of his whiskey.

That would be the end of this inspiring yet tragic tale of American “Straight up doesn’t give a fuck”ery, except that Popcorn lives on.  In November of 2010, Hank Williams, Jr. (that’s right, motherfuckin’ Monday Night Football guy) announced his partnership with a company to distill and distribute Popcorn’s whiskey, legally.  Jamey Grosser, a former Supercross professional, had been given the Sutton family recipe, and “Popcorn Sutton’s Tennessee White Whiskey” is slated to be released in primarily southern states starting this year.  Early reports indicate that after taking a shot of it, you can only see in shades of red, white, and blue for the next 24 hours.

We were saddened to hear of Popcorn’s passing, but that only solidified our resolve to take our moonshine operations to the next level.  Because nothing is more American than creating volatile, highly flammable liquids in steel sills that can explode if any step is done incorrectly, so we can create our very own alcohol that’s so strong it technically is considered rocket fuel, all to help us avoid paying unnecessarily high taxes on likker.  And no one was a more true American in this regard…than Popcorn Sutton.