“It’s almost the weekend, so everybody better fucking rage.”

At the America Fun Fact of the Day, we sometimes have to recognize our roots.  It’s a painful experience that every one on staff remembers vividly, when we first found out that America has not been around forever.  For most of us, we finally accepted this fact by the time we were 18, but that doesn’t make it sting any less.  In Elementary school, we would say with scorn, “Oh, the pilgrims were English?  Go ahead, pull the other one, it plays Ave Maria.”  In Middle School, we would say, “We don’t have time to listen about ‘Mesopotamia,’ we’re going to taste-test the difference between 12-year-old and 15-year-old Bourbon.”  We’re not legally allowed to discuss our reaction to this information in High School, because juvenile records are sealed, but you get the picture.

We’re not saying we started this…but that’d be impressive, right?

But when you let go of your preconceived notions, you can recognize all the reasons why America is so great.  So, when we found out that all those damn fancy word plays we were reading were actually by a British dude, we were pissed.  Until we dug a little deeper, and found the American roots…of William Shakespeare.

As the undisputed master of the American language, a man who discovered more words than Noah Webster, and the one dude who could convince a pre-having-two-kids Gwyneth Paltrow to take her shirt off in front of the camera, it would be easy to assume that Billy Shakespeare was a pure, unadulterated American. Why? Because no one partied harder than Billy Shakespeare, and he actually invented what we today call “Football” in his play “Friday Night Lights.” 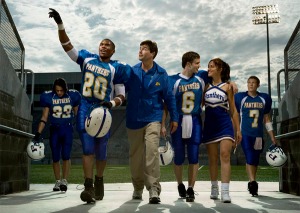 A myriad of touchdowns we shall bequeath/ Respect of small town fathers we shall receive!

We all know the works of Shakespeare, his words as timeless as his titles instantly recognizable. And because no one goes to plays anymore because, come on, plays?  Seriously?  Seriously?  (The previous statement does not apply for plays with nudity, such as Hair or Equus: We’re Going to Avoid Making a Harry Potter’s Wand Joke Here Oh Shit, Nevermind) many of Shakespeare’s plays have been turned into some of our most beloved movies that make us feel smarter than other people. There’s Hamlet, Othello, King Lear, 10 Things I Hate About You, Gone in 60 Seconds, all are masterful adaptations of the bard’s work.

When hearing that these films might have not been written by an American, many of us on staff began to hurl our VHS collections into a bonfire, which we were planning on doing anyway because, VHS tapes?  What is this, 1996?  If we wanted to watch shit without the option of skipping scenes that have little distortion lines fucking everything up, we’d go to a play.  That might not be how plays work, but in our defense, we’ve never seen one.  But, that was before we learned a little known fact about Billy Shakespeare.  Apparently the bard would make frequent visits to America, and considered it a second home.  He was a regular visitor to the at-the-time untamed American wilderness, filled with as-of-yet-unkilled Indians, and possibly a few bears too.  He spent most of his time in New York, help shaping its burgeoning, but still extremely amateur theatre scene (Shakespeare’s comedy, “Haha! Dudes! You Have to Check This Out, This is Fucking Hilarious,” which consisted of Shakespeare getting local Indians absolutely plastered on whisky and watching them stumble around and argue on stage, was one of the better reviewed pieces of early American theatre). 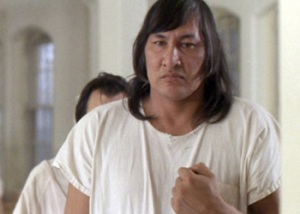 This was before his reflective Insane Asylum Drama period

Shakespeare, with his own bare hands…and about 15 subservient natives, built a wide street which he aptly named Broadway (maybe you’ve heard of it?). This was also where Shakespeare discovered a young up-and-coming actor named Woody Allen, who was booed mercilessly off the stage in his ill-received performance as Richard II. Shakespeare ended up teaching Allen the secret for writing comedies, and gave him several cryptic pieces of advice like “Don’t marry Diane Keaton, but date her for a while and make it into a movie” before cryogenically freezing him until the 1960’s (fun fact- Shakespeare invented cryogenics).

See, it IS possible to be good at both science and writing.

Anyway, Shakespeare really loved America, until he high fived a bear in the forest and caught a completely unrelated case of pneumonia and died.

This entry was posted in America Fun Fact of the Day and tagged 10 Things I Hate About You, America, Bourbon, Friday Night Lights, Gone in 60 Seconds, King Lear, Othello, William Shakespeare, Woody Allen. Bookmark the permalink.