It’s been a long time since you last heard from [REDACTED], our PTSD suffering investigative journalist who we keep in a constant state of agitation by alternating sending him on good assignments (like drinking Four Loko in Nebraska) and giving him terrifying, mind-numbing ones (like watching the French Women’s Soccer team).

For those of you who are new to the site, no [REDACTED] was not in ‘Nam or anything like that, the reason why he has PTSD is the same reason why we can’t contractually release his name—because we forced him to eat a meal at a Vegan restaurant.  Yes, we know that we’re monsters, it came while we were under some, erm, more sketchy management.

So in a category that seems less “cruel punishment” and more “well we need to fill some space, let’s let [REDACTED] do the heavy lifting for us,” we decided to find the most absurd rap video we could, and have [REDACTED] watch it and give us a step-by-step guide.  So, we decided to go with the music video of “City of Crime” which was filmed for the 1987 movie version of Dragnet, starring Tom Hanks and Dan Aykroyd.

We don’t want to give too much away, but it absolutely involves 25-years-younger versions of Dan Aykroyd and Tom Hanks rapping.  Also, here’s a screenshot from it. 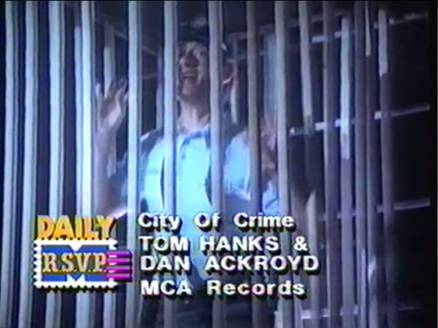 This is from a movie that features actors that went on to combine for eight Academy Award nominations, and two wins.  Sure most of that was Tom Hanks, but still.