“What, you mean you DON’T race drunk on champagne in cars on fire anymore?”

The Indianapolis 500, a Triple Crown of Motorsport race, stands as one of America’s oldest and most prestigious opportunities for people to drive cars really fast in a circle for a few hours. As dangerous as braving breakneck speeds for the chance at a large payday can be for drivers, when the race was first run in 1911, early car technology made it an even crazier proposition. Automobiles were relatively new in the early 20th century, and things like “seatbelts” or “anything to give off the semblance of safety” were laughably foreign concepts.

For the first two years of its existence, the Indianapolis 500 was only driven by Americans, and won by Americans, which we here at American Fun Fact of the Day generally approve of.

But we’re here to talk about the 1913 Indy 500, because even though it was won by a French person (booo) it featured fires, booze, and broken limbs, which pretty much describes our typical Staff holiday party.  So strap in (because the drivers of this race couldn’t) and open a bottle of champagne (which the drivers of this race could) and get ready to take in some American history. 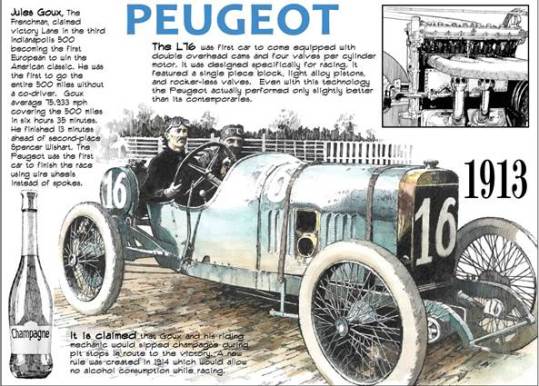 To qualify for the Indianapolis 500, you had to prove that your car could top a speed of 75 miles an hour, presumably without exploding. All in all, 27 different racers made the cut, with seven drivers coming from either France, Germany, Belgium, or Italy.

Now would be a good time to inform you that of the 27 racers, only 11 finished, so it sucks to be Bob Burman, who led the first 41 laps before his car caught on fire, got repaired, broke down again, and finished just outside of the money.

Burman wasn’t the only one who had a rough time during the 1913 Indy 500.  Jack Tower, who had the fastest qualifying time for the race, flipped on a turn on lap 51, breaking his leg.  His riding mechanic broke three ribs.

They still finished 19th, since there were seven teams whose cars crapped out on them before the 51st lap, with the last place finisher, Bill Endicott, only making it one lap before a problem with his drive shaft (heh) took him out of the race.

Endicott’s on the left with about the same expression we’d have if we had to quit a race one lap in.

Now, some of you might be confused by our reference to a riding mechanic. You see, racing technology was so new at this point that every team in 1913 raced with a second person in the car whose sole job was to be on the lookout and tell drivers where other cars were, or if other cars were trying to pass them.

While racing with a guy whose literal job is to be a backseat driver is honestly pretty funny to us, but it’s even better considering that riding mechanics not only ended up being replaced by rear view mirrors, but a guy driving by himself using a rear view mirror had won the first Indianapolis 500.

Yes, Ray Harroun won the first Indianapolis 500 in a car that had a rear view mirror, but two years later no one else decided to replicate this approach (which again, won the race).  So yes, every car was raced with two people riding. This is partly because having a riding mechanic was “tradition” but also because they were required by the rules, after the controversy caused by the 1911 Indy 500 win.

This of course is a very impressively stupid way to make sure that two people can put their life in danger, instead of just one (in fact, the lone fatality of the first Indianapolis 500 was a riding mechanic, so, you know, much safer than a rear view mirror).

Almost every single one of the 16 cars that were unable to finish saw their race dashed by a completely different mechanical issue, from busted drive shafts (heh, heh) to a loose gas tank to burned bearings, because cars were clearly not meant to go 500 miles at this time in history. Of the ten racers who finished in the money, three were foreign-born, including the winner, Jules Goux, as well as the fourth and fifth place finishers.

Marlie Merz, the third place finisher, had what we’d contend would be one of the most spectacular money finishes in racing history. Fourteen minutes ahead of the 4th place finisher, he was vying for second place (and a cool $10,000) with Spencer Wishart when his car caught fire at the end of the 199th lap.

Not wanting to lose his prize money, he decided, “Fuck it, we’re almost there anyway” and ran the final lap of the race with his car actively on fire. His riding mechanic channeled his inner action star by crawling out onto the hood of the car, which mind you was still moving at around 70 miles an hour, where he beat at the flames to help try to extinguish them.

So while an American might not have won the race in 1913, an American did do the most badass stunt during the race, so that’s a nice consolation prize (hopefully the riding mechanic got a fair share of the $5,000 third place prize).

Jules Goux, the suave looking motherfucker pictured above, came all the way from France and had his way with the field, winning the race by over thirteen minutes. While he’s French, and therefore someone we’d love to make fun of, we can’t bring ourselves to do it, because he managed to win America’s race in the most American way possible.

By drinking four bottles of champagne throughout the damn thing (urban legend says it was six bottles, but the point remains that he was drinking booze while crushing the competition).

Now, a lot has changed in racing since 1913.  We no longer have insane riding mechanics willing to climb out onto a moving car’s hood and smash flames with their arms to finish a race. We have rear view mirrors and radio connections to let drivers better know their surroundings.

We also (thankfully, we guess) have less fires, and (not thankfully, we’re mad) less champagne for racers (after 1913, because of Goux, drivers drinking alcohol during races became against the rules, which, like, we get, but we’re still mad). But during a brief moment (well, like, eight hours, which is how long it took for the 10th place finisher to cross the line) American auto racing was wacky, unhinged, and just, like, so recklessly dangerous.

We’re not saying we want a return to the days of 1913, we’re just glad that it happened, and we got to learn about it. Because drunk fire driving is not responsible, but it is pretty badass.