The Inventor of Scrabble Was Actually Named Alfred Mosher Butts

“Wait.  His name was Alfred Mosher Butts?  Are you sure?  This wasn’t someone on staff fucking with Wikipedia again, was it?” 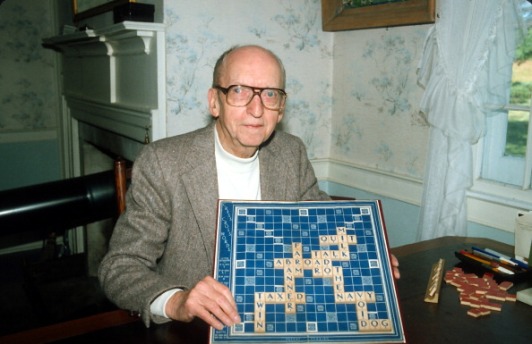 We’ve all at one time or another played Scrabble—statistically, it’s in 1/3 of every American household, and 95% of every American grandparent household. If you haven’t played it before, you’re probably not reading this article, due to your severe and truly heartbreaking illiteracy, but on the off chance that someone told you how to use those programs that read websites out loud for blind people, we’ll throw you a bone.

Scrabble is a classic American game where you form words on a grid to get points. If you said, “Oh, just like Words With Friends?” hello readers who were born after 9/11. But yes, it’s what Words With Friends ripped off. It’s a simple, yet enjoyable, game that stupid people absolutely despise for obvious reasons.

But it is an American invention. And not only that, it was invented by a man that we can’t believe isn’t better known in society. Partly because he invented an iconic game enjoyed by millions, if not billions. But also because his name was Alfred Mosher Butts!  We are children, but we don’t care, we will always find that funny. So let’s talk about him!

The Inventor of Scrabble Was Actually Named Alfred Mosher Butts 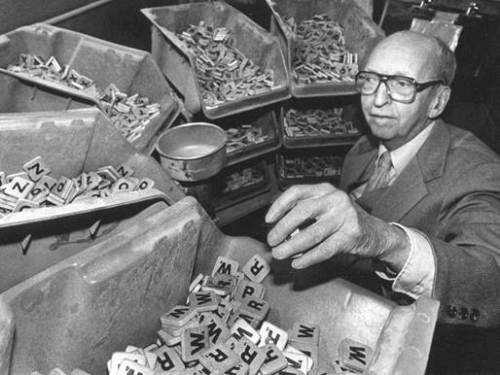 Alfred Butts (hehhehe, Butts! Okay that’s the last time, we promise) was born in Poughkeepsie, New York on April 13th, 1899.  His father was a lawyer, and his mother a high school teacher.

He graduated Poughkeepsie High School in 1917, attended the Pratt Institute in New York City, and in 1924 went to the University of Pennsylvania, where he was a member of the school’s chess team (nerrrdddd) and received a Bachelor of Architecture degree.

In October of 1925, at the age of 26, he married Nina Ostrander, his high school sweetheart. Wait, sorry, we misspoke a bit there, we meant to say his high school teacher.

Yup, good old Albey married his old biology teacher, who was 42 at the time. And for the record, “Albert Butts married one of his high school teachers” is probably the best sentence we’ve gotten to write in a long time. The cradle and grave robbing couple never had children, but they were together until Ostrander’s death in 1979 at the age of 96.

Butts himself lived for another 14 years, making it to 93, so they ended up being a couple with a pretty impressive longevity.  We suspect that forbidden love keeps the blood young.

Anyway, that year he got himself job at an architecture firm, where he managed to work until 1931 when a little thing called “The Great Depression” happened. As Seabiscuit wasn’t around to singlehandedly turn the nation around (that was the moral of the movie, right?) Butts was shit out of luck, and jobless. It was at this time that Alfred Mosher Butts began to design the game that would serve as his legacy…Lexiko!

So here’s the thing about Alfred Butts. He’s really bad at naming things. Like really bad. You’ll see how bad later, but trust us.

Now, Lexiko was slightly different than Scrabble—you played with nine letters at a time, instead of seven, and there was no board, so it was just a math-and-anagrams game.  Anyway, he added the board and re-released the game in 1938 under a much better name… Criss-Cross Words!

Oh come on are you shitting us? That sounds like a joke name making fun of Scrabble.  Okay, so that name didn’t last, he eventually came to his senses and named it…It. No we’re serious. It was the name. It didn’t become known as Scrabble until much later, through no help from Butts, who again, was crappy at naming things.

But what he wasn’t crappy at was coming up with game ideas. He noticed that there were three basic kinds of games available to play.  Games based on numbers, like dice or card games, board games such as chess, and games based on words and letters. So he decided to combine numbers and letters, allowing words to be created for point values, and placing them on a board game using crossword puzzles as his inspiration. It was a truly inspired idea, even if it did take forever to get off the ground. 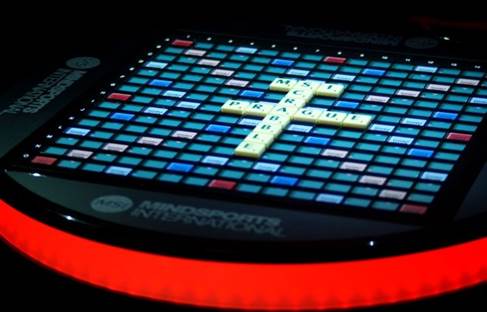 It took even longer to get to the point where the game could be sold for $30,000.

For years, it was a novelty game for his extended network—he’d cut 100 wooden tiles by hand and craft the board, primarily playing with friends and family. By the end of the 1940s, a few hundred Scrabble boards existed at most.

At that point, his friend James Brunot, who you might immediately recognize as not having a name nearly as awesome and hilarious as Alfred Mosher Butts, decided to spend his retirement making and selling the game. It was Brunot who branded it Scrabble, an actual word in the dictionary that means “to scratch frantically.”

That definition, of course, has nothing to do with any of the rules of Scrabble, so we’ll take a large and unethical journalistic leap and just assume Brunot was clearly a recovering Meth addict. Brunot bought the rights to the game, leaving Butts with a royalty for every unit sold, and in the first year Brunot made 2.400 sets, likely in the hopes of making enough profit for a score of that sweet, sweet crystal. Brunot moved some of the premium squares, but largely kept the design the same.

After 21 years in obscurity, 1952 was the year the game finally broke through. Jack Straus, the president of Macy’s, went on vacation at a resort that happened to have Scrabble. He loved it and began to sell it at the world’s largest store at the time. 6,000 sets a week were soon being sold, and while  Scrabble ownership changed hands many times while growing exponentially, Butts was always able to keep his small royalty for the game.

Later in his life, Butts estimated that his royalties came down to about three cents per set sold. That might not seem like much, except that Scrabble has sold 150 million sets worldwide. By our math, that’s a cool $4.5 million dollars. Butts once stated, “One-third went to taxes, I gave one third away, and the other third enabled me to have an enjoyable life.” 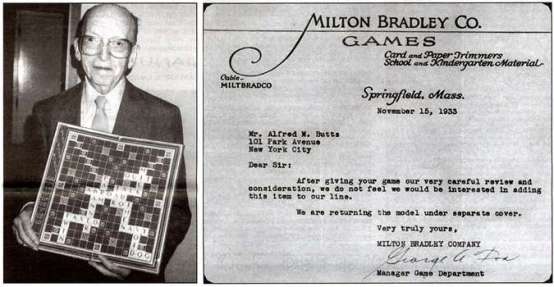 We’re sure part of that “enjoyable life” involved sending a lovely “fuck you, hahahaha” letter to Milton Bradley.

Towards the end of his life, Butts have felt a bit restless, wanting to get back into the game industry. So at the age of 86, in 1985, Butts decided to make card-based board game. The game saw up to four players simultaneously playing against each other in a solitaire-like contest, trying to get the highest score.

Of course, while solitaire uses just a deck of cards, the cards in this game were still letter-based, with the intention of making anagrams. Now clearly, a lifetime of being a part of the board game industry had taught him a lot about how to give a product a snazzy name. He would not be bogged down with laughably bad names like Lexiko, or It, or Criss-Cross Words. Nope, this wasn’t Scrabble, this was Alfred Butts’ other game, so he named it… 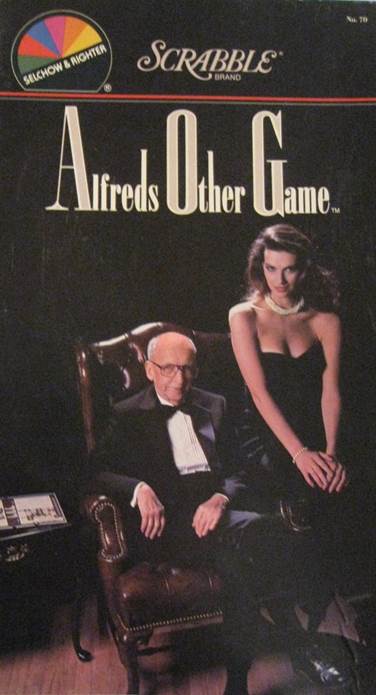 Oh, oh Alfred. We…you know what, we can’t even be mad at Alfred Butts, because this is the single best board game cover ever. Just look at that.

A geriatric doing his best Hugh Hefner impression, rocking a tux, sitting on a fine leather chair. And who’s that perched on the chair’s arm? Why, just the 8th most 80s model they could find, decked out in pearls.

As disrespectful as it would have been to his wife, who he shared a grave plot with, we think it’s a near tragedy that this picture, unaltered, is not Alfred Butts’ tombstone. And the name! Alfred’s Other Game! We take back all that wisdom shit we were saying, age clearly made Butts give less of a shit, and we respect the hell out of him for it.

Unfortunately, Alfred’s Other Game was a pretty spectacular bust, and Butts himself passed away in 1993 just before his 94th birthday, having lived a long and letter-filled life with a teacher wife, and making the world a slightly less boring place during blackouts. So we salute Alfred Butts, a true American pioneer with a name that makes us giggle, but we giggle out of respect, dammit. And also out of butts. Hehehe. Butts.

This entry was posted in America Fun Fact of the Day, American Heroes, The Best of the Rest and tagged Alfred Butts, Alfred Mosher Butts, America, Scrabble. Bookmark the permalink.