We as a nation love sports, because nothing is more American than watching people more physically fit then us compete against each other while we arbitrarily root for one over the other based on where we grew up, who we married, where we went to school, or what team seemed good because you are not going to subject yourself to a life of being a Cleveland Browns fan no matter how much it breaks your father’s heart.

But apparently watching grown men concuss each other into depression, or throw a ball every once and a while for three hours while you drink beer, isn’t enough entertainment for our attention craving minds, which is why American sports teams decided to bring mascots into the game.

Arguably the first sports mascot was this terrifying fucking bear from the 1908 Chicago Cubs, which probably ended up devouring the souls of everyone on the team and cursing them to never win another World Series, but since then mascots have spread across all sports (especially in college athletics) and run the gambit from cute to hilarious to stupid to actual live animals that poop on the field and everything.

There is another category for mascots, however. Fucking terrifying ones. Thankfully, modern mascot design technology has advanced a long way since we had that Louisville Cardinal mascot you see above that looks like someone killed a Muppet and started wearing its skin.

We can make just about anything into a mascot with moderate success. But sometimes, either in idea or execution, we end up with horror movie like monstrosities that are still paraded on the field week after week to urge on their team while the cheerleaders huddle in fear, sobbing, “From Hell, it’s from Hell.”

Here is a list of actual mascots that will give you nightmares tonight. We’re so sorry.

Mr. Redlegs is the mascot of the Cincinnati Reds, and he is coming towards you right now to tie up loose ends after you just walked in on him murdering a child. He is also the prime example of an issue that so many  teams have when trying to find a cartoony and fun totem for their organization—you have a head that is too large and a face that tries so hard to be human that you’re left wondering if he’s not the cruel product of years of nuclear testing.

Mascots are almost always fun, or at the very least not obnoxious. But like Mr. Redlegs, there are a lot of instances of it going wrong. And when mascots go wrong, they go all the way wrong. 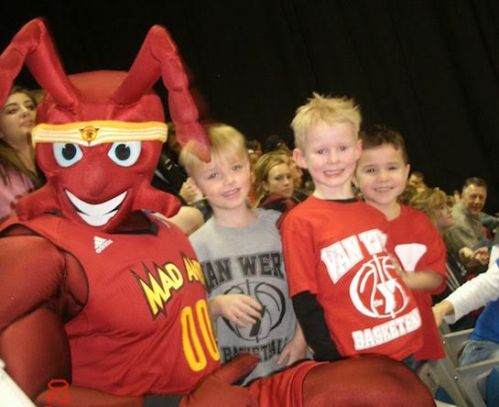 This is a picture of the Mad Ant shortly before he kidnaps your kids. After that, he’s gonna fuck your wife. In a few weeks your kids will stop asking, “Where’s daddy.”  Within a month he’ll be daddy.  In six months’ time you will be forgotten. The Mad Ants will be the head of every household in America by 2025, and there is nothing we can do to stop them.

What the fuck are we even looking at here? It’s like Grimace had to dye his hair after he got put on the sexual offenders registry. If your mascot idea is “random red…blob with eyes that wears sneakers” you…probably were high when you came up with your mascot, weren’t you, Western Kentucky?

Now now, we’re not saying you did anything illegal, but this is definitely the fever dream from a weird roboing trip, right? You can tell us, this is a safe place.

Anyway, this guy is just unsettling. Get him out of here. Next mascot.

Look at those dead eyes. Just really take them in.

You could tell us that right now he is watching his best friend get his thumb cut off because he didn’t pay a gambling debt and we would 100% believe you. I can’t get involved. Poor Robert. This isn’t even so much terrifying as it is so sad it instills a sense of dread in you simply because you’ve come to realize that evil that cannot be rationalized exists in the world.

We’re pretty sure that when they decided to make a cowboy mascot, the only suggestion given to the designer was, “Make him a cowboy but, also, make him look like Clint Eastwood the moment after his wife has died of cancer.”

That’s the look of a man who just got laid off from the auto factory and came home to find his family gone and wife left him a note telling him that his son isn’t his. This is clearly a man who’s earliest memory was of his mother strangling a dog to death and chastising him for being too “yellow” to do the deed himself.

It’s okay to cry for Pistol Pete. He can’t do it himself. He never learned how. 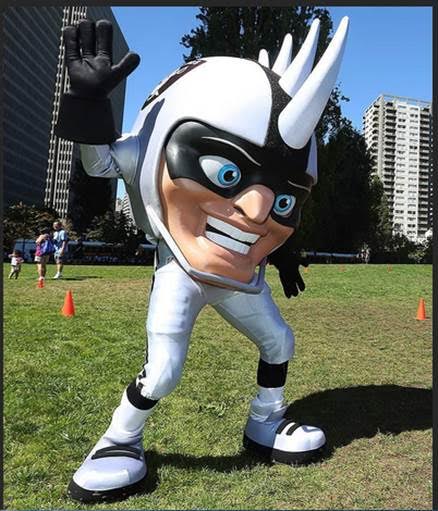 The mascot version of a human head is already terrifying in an uncanny valley sort of way. But this is so much worse. Now, people with normal life outlooks undoubtedly are perturbed by the fact that he has arms coming out of his ears.

But our first response to this is—you can’t go straight from chin to dick! This man is simply a face, a dick, and some limbs! That’s creepy as hell! Are we picturing him naked right now and having a bit of a panic attack about what that says about us as people? You bet your ass we are!

This is the kind of mascot that can spiral you into an existential crisis so bad you have to discover your own brand of philosophy to even try to dig yourself out of it. Admittedly, we shouldn’t be surprised that the Raiders gave us a late term abortion in spandex and demanded that their fans cheer it on, considering the, um aesthetic choices their current owner makes in the haircut department, but come on, you guys.

OH JESUS FUCK!  WHAT THE FUCK IS THAT!? SHIT JUST RUN! THERE’S NO TIME TO EXPLAIN JUST RUUUNNNNNNNNNN! 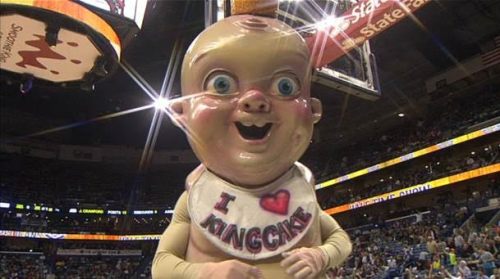 We’ve been really negative this article.

It can be kind of off-putting! So we’ll try to put a positive spin on the King Cake Baby.

Um. Shit, give us a second. Um.  If you have a close friend or loved one who just had a miscarriage, showing them King Cake Baby might make them think, “Eh, now I’m kind of glad to be missing out on that whole baby thing.”

Does that work? No, that’s the most awful thing you’ve heard us say? Well, come on, cut us a break. King Cake Baby made us do it, and we’re pretty sure if you don’t obey him your soul is forfeit.

Sports are fun. They’re one of the best sources of entertainment our society has. So we will suffer the slings of the handful of petrifying mascots sitting on the sideline if we’re able to watch Tom Brady get sacked some more.

Just watch out for King Cake Baby. His blood lust will never be sated.