How do Midwesterners ever live past 40?  Are their hearts made out of Adamantium?” 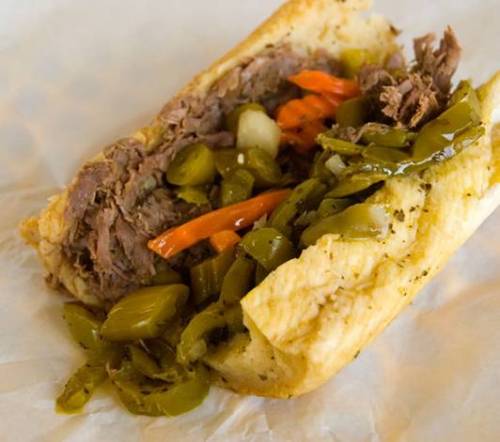 Another day, another discussion of sandwiches coming long after you’ve tossed up your hands and screamed, “AFFotD, listen, I get it, there are a lot of sandwiches out there, you don’t have to tell us about every damn one!”  Well too late reader, by the time you’ve read this, they’ve all been written, and nothing can stop us from posting them, so you’re going to take your two more weeks of sandwich articles and like it!

Anyway, we’re moving on to the Midwest now in our regional portion of sandwich celebration.  As stated in the first article of the series, there will be no discussion of hot dogs, and we’ve also covered regional favorites such as the Italian Beef (though we put that picture up there because, God, how good does that look right now?).  But don’t worry, there will be plenty of unhealthy food items, even from Chicago despite our decision not to include literally every food they’re famous for, for you to stuff down your gullet before sobbingly calling your dietitian to apologize for cheating.  Westward, ho! 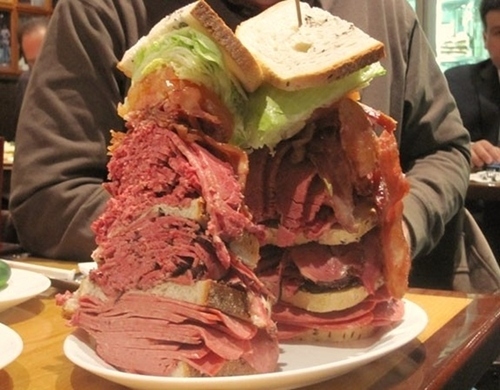 When it comes to sandwich creativity, the Midwest manages to take things to an impressive level.  Maybe it’s the proximity to farms and fresh grains that spur the imagination, or maybe the general distance from America’s coasts have given the entire population a desire to passive aggressively fill their body with as much sodium as possible as a way to prove to those pesky oceans that they don’t need their fancy salty water.  Who knows.  Maybe people just got bored really easily in the Midwest at the turn of the century and turned to food when prohibition tried to take away our liquor.

Actually, come to think of it, that last one sounds crazy plausible.

We’ve mentioned the Tavern Sandwich before in our description of the Sloppy Joe because we’re about 90% certain that what you’re looking at hear is the ancestor of its more tomato-y brethren.  It’s an incredibly basic sandwich popular in taverns in Iowa—just a hamburger bun with some unseasoned ground beef mixed with sautéed onions.  You can top it with pickles, ketchup, and mustard, sure, but it’s basically a cheap and easy meal to eat at a bar.  It was first known as a “loose meat” sandwich, and in Illinois it’s referred to as a “loose hamburger sandwich” but Tavern Sandwich is the most prevalent name, and the best, because it reminds us of drinking.

Souix City likes to lay claim to the tavern sandwich, and there is still some debate on who actually was the first to make it though  Ye Olde Tavern in Sioux City, which closed in 1974, is colloquially referred to as the originator of this sandwich style.  Maid-Rite, the casual dining restaurant chain which opened its first location in Muscatine Iowa, started selling their own loose meat sandwich since 1926, so they sometimes like to claim to have invented the sandwich, but really we’re arguing about who was the first idea to cook up ground beef lazily without trying to put it in a patty and slapping the end result on the bun.  This is the kind of idea that didn’t exactly require some divine intervention to come up with.

Either way, as far as sandwiches go, it’s good, if somewhat basic.  Also, for those of you health nuts reading this that we want to make uncomfortable, this is easily one of the healthiest items we’ll be talking about today.  Now let’s look at a similar sandwich with…

We’re not sure if we actually want to include this item, if we’re being perfectly honest.  Is it a sandwich, or is it more like a calzone?  Is it a hot pocket?  Is that a genre of food now, a pocket?  Is this just a meat pocket instead of a sandwich?  Inevitably for this reason we didn’t include it in our submarine sandwich article series, but we’ve since decided it’s worth at least a half-assed description.  This Nebraska food, inspired by a traditional 1800s Russian sandwich that spread to Germany and eventually the United States, is a yeast dough bread pocket filled with beef, pork, onions, and cabbage or sauerkraut.  It claims to have originated in the United States, which isn’t entirely true.  It got tweaked here, probably.

Either way, term Runza is now trademarked by Runza, the Nebraska-based fast food chain that makes quick meat pockets for your consumption and has been doing so since 1949.  They’re just okay, even though it’s questionable if you should be calling it a sandwich.  It’s okay, Nebraskans, we’ll throw you a bone and keep your savory meat pocket on the list.  Don’t say we’ve never done anything for you.

St. Louis is fucking weird.  Remember when we got all besides ourselves in the last article complaining about how some fools in Massachusetts took a bunch of chow mein noodles and put it on a hamburger bun like a drunken college student who hasn’t gone to the grocery store in like three weeks?  Well here comes St. Fucking Louis, makers of shitty pizza and only okay open faced sandwiches, with the St. Paul sandwich, which has nothing to do with St. Paul, unless St. Paul is some slang term for “an egg foo young patty, wait, what the fuck?”  Yes, that’s right, this sandwich makes a fucking Chinese omelet dish with mung bean sprouts and minced onions, puts it between two slices of bread (just white bread, just boring old regular bread) and serves it with pickle, onion, mayo, lettuce, and tomato.  That sounds fucking disgusting.

This sandwich has been around since, most likely, the 1940s, when Chinese restaurants tried to attract American customers.  They made egg foo young into a patty and put it on a sandwich because they wanted to appeal to American palates because they apparently lacked the inherent understanding of the difference between a good idea and a bad one.  Thankfully, it’s only available in two restaurants outside of the St. Louis area, and those are still contained within the state of Missouri.  This is a bad sandwich, and St. Louis should feel bad for making us write about it.  God, we have to go to Indiana of all places to get this fucker back on track.

Holy hell that is not fucking around!  This Huntington, Indiana result of an 1908 experiment from a place called Nick’s Kitchen takes a breaded and fried pork tenderloin cutlet and prepares it in a similar manner as Weiner Schnitzel, giving it definitely has the highest “surface area of meat” to “surface area of bread” ratio of any sandwich on this list.  That’s almost cartoonish—eating this, most people would become full by the time they managed to work their way to the bun.  Not that we’re complaining, because eating an excessive amount of meat on a cheap lunch-friendly meal is what America is all about.

The sandwich is served with fries or onion rings, and is topped with mustard, lettuce, onions, pickles, and mayonnaise.  Other Midwestern states approach this sandwich in a similar way, but it’s an Indiana dish through and through.  We’re not saying we’d stay in Indiana to eat this, but we’d definitely pick one up while driving through to get to where we really want to go, just like the state’s motto tells us.

Okay, Chicago, we get it, you want everyone to die of heart disease, we get it.  The city best known for deep dish pizza made with pounds of cheese, blissfully ketchup-less 100% beef hot dogs, and beef sandwiches that are repeatedly dunked in their own juices has an interesting love affair with tamales.  It could be the large immigrant Hispanic population, or it could be that many African-Americans who came to Chicago from the South brought tamales with them as well.  But, either way, it’s an encompassing food staple.  Famous hot dog stand Gene and Jude’s, for example, sells four fucking menu items.  You can get a hot dog, a double dog, a side of fries, or a tamale.  We’re talking about a city where there is a Tamale Guy who goes around from bar to bar up until closing time to sell tamales to drunk Chicagoans.  For a city smack dab in the middle of the nation, Chicago has a surprising, but understandable, love affair with tamales.

So that’s why they decided to put a tamale on a fucking hot dog bun and call it a Mother-in-Law, which they smother in chili and top with standard hot dog toppings.  Of course that’s a thing that happens.  The best example of this is Fat Johnnie’s, an incredible (and super decrepit) hot dog stand pretty far down on the South side of Chicago that’s been one of the best providers of artery clogging Chicago food since 1972.  They also have a mighty dog, that places a hot dog in a Mother-in-Law, but we’ll focus on this glorious mess of a sandwich instead.  Yes, it is delicious, and yes, just reading about it somehow made you gain three pounds.  We regret nothing.

Oh, fuck right off then, Chicago.  When we said we were going to get unhealthy with this, we weren’t kidding.  Chicago’s Jim Shoe, or Jim Shoo (incorrectly referred to as a Gym Shoe on occasion) can be found at sub and hoagie shops in parts of Chicago that serve their food through bulletproof glass.  It’s basically like a suicide, in meat form.  You take a hoagie bun (again, we’d have written about this for our submarine sandwich article if we knew it existed at the time) and fill it with just about everything you can—roast beef, corned beef, gyro meat, lettuce, tomato, mustard, mayo, tzatziki, and cheese, and then you spend the next two days struggling to digest this giant hunk of food you ate in thirty minutes when you should have divvied it up to eat over the course of two days.

While no one seems to know where the sandwich originated, the best assumption is that it’s a recent creation, and no one cares enough to take credit for this wonderful and terrifying monster of a sandwich.  All we know is that there’s a massive sandwich with all the meats available at various places throughout Chicago if you know where to look, and that’s almost enough to make us forget that St. Louis tried to railroad this article a bit earlier.

Oh, and if you’re curious how we first found out about this sandwich at the AFFotD offices?  Last year a prison guard got busted for trying to smuggle pot in for inmates using a Jim Shoe, which is fucking hilarious.  Chicagoans are out of their goddamn minds.

And there we have it for the Midwest.  Stay tuned for our next article, where we talk about Southern America, the Mountain Region, and make fun of the West Coast for being boring about sandwiches.