The Worst Mountain Dew Flavors of All Time

“I am AMPED I am AMPED woah what if they made an energy called AMP and…wait I think my heart stopped, or…MOUNTAIN DEW WOO!”

Mountain Dew has one of the more unique rises to popularity of any beverage that can be poured out of a tap without someone checking your ID first.  Originally invented in 1940 in Tennessee with the we’re-honestly-not-kidding-here’s-a-commercial-for-it slogan of “Ya-Hoo!  Mountain Dew.  It’ll tickle yore innards” and advertising itself to Hillbillies, it’s since gone on to be extremely popular among gamers, extreme sports fanatics, and sixth grade kids who view it as a caffeine-rich forbidden fruit, like speed that you can buy at the gas station on the way to tweeking out throughout your school day.

Mountain Dew was first developed by Barney and Ally Hartman, who made it as a mixer and named it after a Scottish and Irish slang for “moonshine.”  It was eventually bought out by PepsiCo in 1964, and the “hillbilly angle” was removed not too long after.  While you know it as a “citrus” flavored soft drink, and it lists concentrated orange juice as one of its flavors, it’s basically just sugar and caffeine with a hint of “dorm cafeteria OJ” flavor to it.

And while “the potent combination of a sugar high with a caffeine buzz” is a good enough combination to help Mountain Dew corner 80% of the citrus-flavored pop market, in our age of American ingenuity and overzealous marketing, a company can only rest comfortably on your laurels for so long selling just one kind of middle-school wake up juice, and ever since the 1980s Mountain Dew has been experimenting with a variety of flavors.  Some of them are good (looking at you, Code Red).  Some of them…well, not so much.

The Worst Mountain Dew Flavors of All Time

One way or another, we all grew up with Mountain Dew probably framing at least one or two bad decisions in our lives.  Whether it was getting amped up on caffeine so much that you said, “Fuck it, I’ll just jump from the top of this tree I just climbed this cocaine, I mean Mountain Dew, is amazing I’m going to live forever!” at the age of 9 or it was that time you decided to go to Taco Bell to get an extra-large Baja Blast half-filled with vodka before your first public intoxication ticket at the age of 14, there are a variety of ways that the super charged energy boost that is Mountain Dew shaped your formative years for better or worse.  Well, definitely for the worst if your mom bought you caffeine free Mountain Dew, which pretty much defeats the entire purpose of the damn stuff.

Mountain Dew is a hard beverage to screw up.  It’s just insane, vision-blurring amounts of sugar with enough caffeine to make you consider making an extremely in-poor-taste Michael J. Fox joke after chugging a can.  So, pretty much, any sweet flavor will work.  Code Red just takes the orange taste of Mountain Dew and replaces it with some approximation of “cherry” or, more accurately, the flavor of “red” and it tastes just fine.  And for those of you who never realized that Mountain Dew was technically orange flavored until this point (seriously, a show of hands, who would have guessed that Mountain Dew was supposed to taste like an orange soda?) well that’s the point, there’s enough sugar to drown out whatever fruit flavor you have, unless you choose a flavor combination that’s mind-numbingly wrong.

These are mind-numbingly wrong. 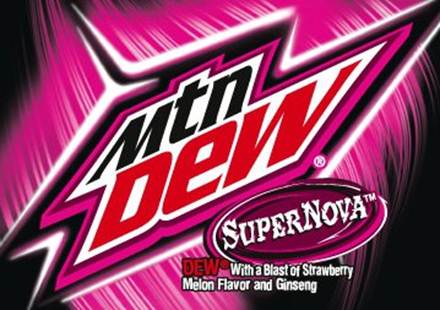 We might be cheating a bit here, since Supernova came in two varieties—regular, and diet.  We’re going to focus on the diet version, because we can maybe trick ourselves into not hating the normal version (which is bad), but removing all sugar and making it diet would make it taste like a completely different beast (the kind of beast that would kill your family).  Now, for those of you thinking, “Well, strawberry and melon doesn’t sound too bad” you should know that you’re wrong, but you’re even more wrong when dealing with a diet version of that flavor combination.  Just think about Mountain Dew flavored like strawberry (not a very good soda flavor) and melon (see also: strawberry) and combine those flavors (which still sounds kind of gross) with that “diet soda” taste that every diet drink has where your tongue starts spazzing out and going, “Woah, woah, what are you giving me, man?” and you just have to say, “No, it’s cool, tongue, it’s just soda, trust me.”

Mountain Dew Supernova was part of the DEWmocracy campaign (fan-based “choose the flavor” competitions, apparently, are required to have stupid pun names) and it came second place, losing to Voltage (blue raspberry, which is a flavor that makes sense as a Mountain Dew option).  Though, for whatever reason, they still sell Supernova in Finland and Canada.  Oh, and they also put Ginseng in this, because Mountain Dew needs to fuck the right off trying to put some fancy health root in our unhealthy soda.  We won’t stand for that shit.  Gross.

When presented with a soda that has enough sugar to put you in a diabetic coma, if you sip it and the first thing you taste is sour, you’re immediate thought is, “Poison.  This is poison.  I have been poisoned.”  Soda is supposed to be refreshing.  Sour is reserved for, like, Grapefruit juice, which you only drink a thimbleful at a time and which negatively interacts with prescription medication.  So the reckless combination of flavors in this discontinued-since-2005 soda failure is a bit too much.  We can get behind a grape flavored Mountain Dew, because grape soda doesn’t taste like grapes, it tastes like purple, and purple is one of the better tasting colors out there.  Black Grape soda?  We’re wary, but okay.  You’re kind of getting rid of the whole “purple flavor” aspect, but whatever.  But making all that sour?  Giving it the tagline “A blast of grape flavor with a sour bite with other natural flavors”?  No, that is poison.

Do not drink this.

What the fuck did we just say?  No diet soda, no sour soda, and, Jesus, who really drinks a green apple soda?  This is a terrible idea all around.  Diet Crave was part of 2010’s FanDEWmonium campaign (Jesus fucking Christ, people, chill with the pun-based campaigns, fucking hell) and got 7th place, not making it to the final round, so at least America knew enough to say, “Eww, gross, green apple, eww, diet, eww, get this shit out of my face.” 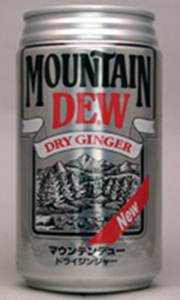 Mountain Dew released a dry ginger ale in Japan in the 1980s.  If you can’t figure out why that’s a terrifying idea, you’ve probably not visited AFFotD website before.

Have you ever had non-alcoholic sangria?  Like, you’re in a convenience store, and you see a bottle of something that says “Sangria” and then you get excited, thinking, “Oh I thought this store doesn’t sell booze” and then you take a sip and realize there’s not booze in there, and it tastes like a cheap imitation of fruity wine, which tastes pretty shitty without alcohol to wash it down?  And you’re not even grossed out necessarily, you’re just kind of…disappointed and sad?  Like, it tastes like disappointment and sadness?

Anyway, Mountain Dew decided to tap that particular flavor and make it into a pop.  It’s been available at Taco Bell since December of 2013, which makes sense because “tacos and Sangria are basically from the same country, right?” totally sounds like something an out of touch corporate executive would say, and also because if you’re at Taco Bell, science has determined that you’re already drunk, so they probably get a lot of wasted people ordering this thinking, “Look at me, I’m drinking wine soda, I’m fancy” while being too plastered to know that there’s no alcohol in there.

As for every other idea behind this awful flavor idea?  Horrible.  Sangrita is, by definition, a chaser, and is typically not something that people go out of the way to drink outside of “helping your tequila shot go down smoother so you don’t puke it up and you know come to think of it you’ve probably had enough we should cut you off, naw just kidding, drink your cute little face off you shiny diamond.”  And the slogan?  Doesn’t Mountain Dew…have a citrus punch normally?  Shit’s made with fucking orange juice.

Jesus Christ, people, when we said this soda was made with orange juice, that didn’t mean we wanted you to mix your Mountain Dew with orange juice like the most depressing alternative to a Screwdriver in existence.  You know, even though Mountain Dew decided to name itself after a slang word for moonshine, that doesn’t mean that it should be used to try to replace alcohol in otherwise alcoholic beverages.  In 2012, around when Taco Bell decided to get in the breakfast game, the food chain apparently decided that people who like caffeine and orange juice in the morning could drink orange juice with a cup of coffee like some sort of loser, or they could be hip and young and well that’s how they sold it, let’s skip ahead, they just poured some Tropicana orange juice into some Mountain Dew and acted like they invented fucking breakfast.

We get the basic concept of “caffeine in your orange juice” but this is a gross idea.  Why is this a gross idea?  We’re a little concerned you even had to ask.  Because when has it ever struck you as a good idea to pour soda into your fucking orange juice?  Jesus Christ, people!  Now, Taco Bell has a lifetime contract with Pepsi, and Pepsi makes Tropicana orange juice, and more importantly, Pepsi makes Mountain Dew, so we get why there’s a sort of symbiotic relationship between Taco Bell and Mountain Dew, but this seems like one of those relationships where, even though they both look happy, everyone knows they have to split the couple up, because they’re just insufferable together, and they keep supporting their own really shitty decisions, and next thing you know they’ve got matching douchey tattoos and dropped out of Law School to “really focus on the relationship” and start pouring orange juice in their soda like fucking lunatics.  We’re happy that you found someone, Mountain Dew, but listen.  Taco Bell just isn’t right for you.  Would you like us to introduce you to Pizza Hut?

When people say God is Dead, they’re trying to make a point that they don’t think God exists, or maybe that the concept of God no longer fits in with our society.  But really, it implies that there was an omnipotent being that created us, the universe, and watched over us.  And then died.  Did we kill him?  Did he die out of shame at how we represented His works?  That’s not clear.  But, from a clearly literal standpoint, people are technically saying that God existed, in the past tense, but now, he is dead.  We just want you to know how  we interpret the meaning of that three word inflammatory phrase, because we’re sticklers on things like that.

Anyway, Mountain Dew just started testing a Doritos-flavored Mountain Dew called “Dewitos” because if this article hasn’t done enough to convince you that all of the copywriters that work for PepsiCo are fucking hacks, then nothing will.  It supposedly tastes “like orange, with a cheese aftertaste” which, just, you know what, just fucking great.  You guys keep doing that, we don’t even care anymore.  Oh, what’s that?  There already are Mountain Dew Doritos and this is really just the snake eating itself from both ends?  Well great, fucking great.

16 responses to “The Worst Mountain Dew Flavors of All Time”