The American States Of America: The Most American Qualities Of Every State (Part 4 of 10)

America has so many states, we can’t count them all right now because cards on the table we’re pretty hammered at the moment, but it’s at least twenty, and we know that because we’ve already listed the most American qualities of the first fifteen states to join the United States, and we’ve got a list of five more right here.  Fasten your seat belts, readers, you can ask yourself why you’d need seat belts while sitting at your desk (or while on the toilet—hi there smart phone users!) some other time, because we’re here to continue our American states of America feature with the most American qualities of states number 16-20.  For America!

When most people think of Tennessee, they think about Country Music and popular ABC dramas.  We are not most people, so when we think of Tennessee we think think about the Kyle Ortons of the world.  We think about people chugging Jack.  Jack Daniels is the equalizer of brown liquors.  Seriously, everyone you know has at least tried Jack, and if you meet someone who says they haven’t, they’re either a 7-year old you started talking to at the nearby playground (in which case, we’ve been meaning to talk to you about that, you gotta cut it out, we’ve gotten a lot of complaints from local parents) or they’re a Russian spy, since any liquid that isn’t vodka is scientifically proven to melt the insides of a Russian like a toy soldier placed in a microwave.

Bourbon is a bit too divisive of a drink, because, and we don’t mean to sound sexist here, but women have vaginas and hate Bourbon.  That’s of course not a universal truth.  There are women who love bourbon.  They also love beer, poker, football and cigars.  These are called “keepers.”  But in general, you will find more women who say “God, I just can’t drink Bourbon, it smells like a couch” than men.  We’ve done studies and stuff so it’s official and not at all us just blindly sticking to gender stereotypes.  However, the fine Tennessee product of Jack Daniels doesn’t have as much of an uphill battle, mainly because if you mix it with coke it tastes good to just about everyone.

That being said, the most American way to drink Jack, which we can only assume was the whiskey’s intended purpose when it was first distilled, is to chug it, straight from the bottle, preferably while standing on top of a bar or a table.  Screaming, “Wooo!  Hot DAMN!” after you finish is optional, but highly recommended.  And Tennessee made that possible.

Ohio, the only state in the nation to be round at the ends, and high in the middle, was the first state to join the Union in the 19th century, and the most recent state to be publicly humiliated by an NBA superstar.  They’ve had one more river catch on fire than your state has, they are home to both the Black Keys and the Drew Carey show, and while Ian Hunter had some positive things to say to say about Cleveland, currently that particular city leaves people wondering, “Who the hell still uses pay phones?”  But there is one thing that Ohioans do better than the residents of any other state.

They get the hell out.  Specifically, all the way to outer fucking space.

Ohio is referred to as the birthplace of flight, since the Wright Brothers were from Dayton, but they took things one step forward by turning into an astronaut factory.  Twenty-three Ohioans have become astronauts, including John Glenn, the first American to orbit Earth who also later became the oldest person to go into space, Neil Armstrong, the famous trumpet player whose first moonwalk was marred by blood doping allegations, and James Lovell Jr., who was best known for his Academy Award winning turn in Forest Gump.  This is no small feat—being an astronaut is easily the most difficult of the truly American profession.  And of American professions, being an astronaut is possibly the most American.  At this moment, 70% of all children under the age of 13 want to be an Astronaut, and the other 30% are the girls who don’t have any tomboyish tendencies.  So whatever it is about Ohio that makes people say, “Fuck this noise, I’m going to space” we salute them for it, because it’s working.

Yes, yes, we’ll get to Mardis Gras in a second, would you let us do the basic intro where we at least give you some additional relevant information about the state first?  Geeze.

Three years after it became a state, Louisiana got to bask in Andrew Jackson’s glory during the Battle of New Orleans, where Jackson’s troops, who were outnumbered two to one, killed or wounded 2,500 British troops while only losing 200 of their own.  This is what military analysts refer to as “a curbstomping.”  Of course, this all happened two weeks after the War of 1812 had ended, but no amount of treaties could ever stop Andrew Jackson from straight up murdering him some Red Coats.  It’s known for its Cajun culture and it’s spicy, flavorful, seafood-laden food dishes.

Okay, yes.  And they have Mardis Gras and Bourbon Street.  Yes, that’s so American.  First of all, having a street called Bourbon Street is the easiest way to make us like you.  And if you then decide to stock that street, named Bourbon Street, with bars and strip clubs, well, actually we’d have been disappointed if you hadn’t done that with Bourbon Street.  Bourbon Street and Mardis Gras emphasize some of America’s greatest attributes—Herculean drinking feats and titties.  Everyone knows that Mardis Gras is a sea of drunken nudity that fits in right with the theme of Bourbon Street’s bars and skin joints, but we as a nation accepted the notion of “beads=boobs” and “I mean, you’re gonna get your shoes puked on, that’s just an inevitable fact of life” so readily because these traits are engrained in our American subconscious.  If you told a French person, or a Branson, Missouri resident, “Listen, we’re going to eat a shitload of fatty foods, get borderline-has-to-go-to-the-hospital-for-a-stomach-pump drunk, and throw beads at women with a fervent expectation that we’ve earned the right to see their boobs, and if the stars align, we might end up puking on those boobs” they’d say something like “sacre bleu” or whatever, because French people suck and can’t understand such wonderful American concepts such as Louisiana’s take on Mardis Gras.  Fucking frogs. 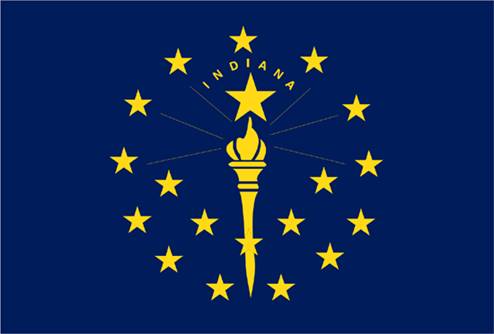 Poor Indiana, what are we going to do about your self-esteem?  Indiana’s state motto is “Crossroads of America,” which sounds to us like a nice way of saying, “You have to drive through here to get to where you really want to go.”  Come on, Indiana, buck up.  Indianapolis is nice!  You guys seemed to do a good job with the Super Bowl last year too!  And Hoosiers!  Don’t forget Hoosiers!

Of course, Indiana does have one American trait that it exemplifies more than all others—driving cars very fast for no actual reason.  Granted, there are those out there who might say something like, “If the point of the state is that people drive through it to get where they want to go, then wouldn’t car racing be the state realizing they can put the cars on a loop and no matter how fast they go they can’t get out of Indiana?” but we would never say that ourselves.  We’re not going to go negative with this, that’s not our nature.

The first ever long-distance auto race in America was held in Indiana, at the Indianapolis Motor Speedway.  This race has since gone on to be known as the Indianapolis 500, which is one of the biggest, if not the biggest, motorsport event in America.  The very roots of car racing can be found in Indiana, and it’s no wonder it has become the most popular sport in America—it involves giant machines moving at life-threatening speeds while wasting incredible amounts of fossil fuels that can never be replaced, and certain variations of the sport were literally invented by people running from the cops while carrying illegal alcohol.  Really, the only way we can imagine someone thinking of a sport that would resonate more with Americans would be if they found a way to combine the race with a hot dog eating contest.

Holy shit, that’s the best idea we ever got.  Indiana, that’s our gift for you—when you start your IndyCar Hot Dog Racing Eating League and Indianapolis becomes the most populous city in the nation because every American in the nation will want to live as close to an IndyCar Hot Dog Racing Eating League as humanly possible, you can thank us for your new awesome state motto—“Indiana:  Very Fast Wieners.”

…Well this is awkward.

Okay, yeah, we’ll weather through this.  Just, yeah.  Ignore that flag up there.  We’ll just…yeah.

Yeah, we know, we know, Mississippi didn’t abolish slavery until 1995, stop it, we know, but we can move past that and focus on what makes Mississippi American.  Okay?  Let’s focus on the positives.  Elvis is from there, after all.  And you love Elvis, right?  Well you like Elvis at least.  Okay, at the very worst, you’ve heard stuff by Elvis and didn’t hate it.  But you know who does love Elvis?  Your mother.  Yes, your mother loves Elvis.  Don’t you love your mother?  Of course you do.  Every American loves their mother.  And Mississippi helped your mother be happy by giving her Elvis songs.  And that’s good enough for us.

That wraps up part four of our American States of America series.  We’re pretty sure the next five states have fewer Confederate flags to deal with (fingers crossed) so stay tuned, as we’ll be bringing you the 21st through 25th states to enter the Union.

2 responses to “The American States Of America: The Most American Qualities Of Every State (Part 4 of 10)”