American Politics are a lot like a Tijuana Donkey Show.  People get strangely excited about it, but the end result always ends up being incredibly messy while filling everyone involved with a profound sense of shame.  No matter what political party you endorse,  more often than not it’s going to center around an aggressively idealistic narcissist surrounding him or herself with a murder of hyper-educated, over-qualified, over-worked younger workers.  It’s not a question of Republican and Democrat, politics on both sides show people practically killing themselves with grueling schedules and illegitimate children extended time away from their families to get into a game that doesn’t even pay that much more than the starting salary for an attorney.

But, no matter what, if you’re a member of one of the major political parties, you have both an established political legitimacy, as well as a reason to get into surprisingly hostile arguments with strangers that have any differing views.  That’s the nature of US Politics.

“Well I think that municipal elections for waste management officials should be held every THREE years, jackass!”

But hidden in all the partisan turmoil, a simple truth remains about American politics- this nation is filled with absolutely absurd political parties, most of them hidden under the blanket of obscurity and, again, just plain idiocy, because who in their right mind is going to want to join a political party that’s only platform is “vaccines are giving our kids Autism”?

Well, The Canary Party, evidently, which is just one of many miniscule Political entities you’re going to hear about today in…

Let’s start with the one’s we shouldn’t have to explain, but still will (just to make fun of them).

Nazis.  It’s always gotta be Nazis.  Those who adhere to the Indiana Jones school of thought know that the only thing that is as bad as a Nazi is a snake, and even then snakes are far less racist (snakes are still pretty racist, though).  The American Nazi Party was founded in 1959 by a former Lieutenant Commander of the Navy, which leads you to wonder how effective he would have been at his job since he spent WWII fighting against a man he would later grow to call a goddamn “martyr.”

The existence of this party is a sad reminder of a time in American history where a distressing amount of our youth were raised on lead paint chips.  Also, their founder looks like a man who is unable to hold an erection.

The group was eventually renamed, and around that time George Rockwell, the guy behind this terrible idea, was killed by a fellow Neo-Nazi.  Which just proves the old saying- guns don’t kill Nazis, Nazis kill Nazis.  Stupid Nazis.

While the Communist Party in America did exist before the Cold War, there’s something to say about a political party that’s funded by a nation you’re mired in a nuclear standoff with.  We’re not saying that Communists are ridiculous and incredibly un-American, but that’s exactly what we’re saying when those Communists in question spent their time trying to perform espionage against America.  But at least they were allowed to drink.

The Prohibition Party’s communiques read like the speaker had a stroke midway through the sentence describing their ideology.  One such message states, “If you are a reform-minded conservative and a non-drinker, the Prohibition Party wants you.”  We don’t know what that middle part is doing there, but we hate them for it.  That would be like if we started a political party and tried to recruit you by saying, “If you share mild Libertarian ideologies, and want to shoot baby penguins, then join us!”  For those of you keeping track at home, we’re equating temperance with shooting baby penguins.

At least America knows not to mess with this terrifying group.  Their candidate in the 2008 election ended up with only 643 votes.  To put that in perspective, that’s only ten times as many votes as Santa Claus got.  Ha. 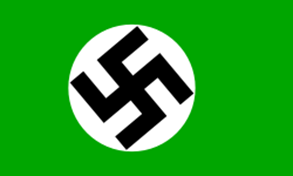 The Wikipedia article for the Libertarian National Socialist Green Party, which is an American political party (though it’s never fielded a candidate in an election) is in German, and we’re pretty sure the article only contains the German phrase for, “Shit, we’re so sorry, you guys.”  The group consists of Nazis (ugh) who are pro-gay, atheist, peaceful (wait what?), anti-racist (didn’t you say…), environmentalist, choose not to take a stand on the justifications of the Holocaust (oh, right, Nazis) but opposed to government sponsored killings that occurred during it (wait, come on) and is open to any race joining them as long as they don’t belong to a religion.  Oh, and they’re pro-Israel.  Because they want to peacefully relocate all the Jews to Israel.  Which sounds a little Nazi-ish…we guess.  We didn’t bother going to the group’s website, because our computer network is set up that we can’t access any site that our filters think are being used to fuck with our heads.

While a bunch of these political parties seem like they were invented to fuck with us, the PPP pretty much admit that right off the bat without going so far as to say it outright.  Their slogan is, “Sex is good!  Sex is great!  Yeah, Sex!”  We…we’re strangely okay with this.

Okay we’re going to end things with things that don’t include environmentalist Nazis.  Comedienne Gracie Allen decided to run for President in 1940 as part of a publicity stunt with her husband, George Burns.  They called their party the “Surprise Party” which apart from being actually-pretty-clever, had a mascot as a Kangaroo and a motto that said “It’s in the bag.”  It was a pretty perfectly executed joke, and Allen received 42,000 votes in the general election.  Only six women in American history running for either President or Vice-President have ever received more votes.  Upon reading this, Hilary Clinton sorta bowed her head and let out a really disheartened sigh.

And honestly, of all the parties we’ve mentioned…The Surprise Party absolutely gets our vote.  Every damn time.