“You are absolutely not surprised to see we’ve been arrested.”

~Everyone appearing in this article

As we’ve seen in the last two days of fun facts, American celebrities like to really make it a point to let you know that they can get away with anything.  And below, the final group of celebrities, prove that this is pretty much true.  America is a great place to be famous!

…But that’s not stopping us from taking great pleasure in seeing these smug mug shots.

If you ever wondered what a washed up, drunk actor would look like shortly after spouting off Anti-Semitic rhetoric and calling a cop “Sugar tits” would look like, here it is.  America loves a villain, and we love it even more if that villain is totally bigoted.  Mel Gibson looks like that drunk friend of yours who is trying to pretend he’s “totally good for another drink” when he just puked on a bartender.  In fact, we’re guessing that’s how Gibson’s night actually started.  But, no matter what, there’s something beautiful about the unifying aspect that everyone can see this picture, and simultaneously think, “Ugh, what a cock.”  Speaking of douchey people getting busted…

Ha, holy shit, where did the guy who had sex with Jessica Simpson go, and why is the youngest brother from Home Improvement in this picture?  This looks like the “before” picture in a Clearasil commercial.  It’s amazing, from this vantage point, you can’t even tell how racist his genitalia is.  John Mayer got arrested in 2001 for speeding and driving without a license.  We’re surprised he wasn’t charged for assault, because, you know, his music is pretty awful.  Not physical assault, mind you, just mental assault.  With his music.  Which, as we said, is awful.  Anywho, in 2009 John Mayer, who in no way was trying to make himself seem like a “rebel from the law” to hop into someone’s panties, double dog dared the internet to find his Mug Shot.  “I bet you can’t find my mug shot, where I’m like, totally a badass, like not even sweating, even though, you know, I’m dangerous, but I might change for the right woman,” he told the internet.  He offered to donate $25,000 to a charity of their choice if TMZ could find the mug shot.  Saying, “Fuck helping people,” The Smoking Gun posted it five minutes before TMZ could, probably while sending an email to TMZ with the headshot, and the subject title of, “FACE!”  Too bad Mayer was so anxious to get a photo leaked from before he hit puberty, though.

Why does America love watching a child star turn into a sex figure before turning into a flaming car wreck?  Well, it has a long storied history with America’s agricultural fertility, but also very little is more satisfying than watching the person who was sexually unattainable turn into a slobbering mess.  Ladies, when you go to your High School reunion and see the once star quarterback who wouldn’t even look at you stretching out his rented tux so bad buttons pop everytime he takes a bite of cake, don’t you sort of give yourself a bit of a mental high five?  And fellas, remember when you asked that one girl out to prom, and she shot you down, but then she got totally knocked up at the end of Senior year and now you go out of your way to go to the Piggly Wiggly where she works during her hours and casually flash your Rolex at the checkout counter, while saying in a really fake voice, “Oh, hey Karen, wow how long’s it been, ten years?  But, you’re looking great.”  She doesn’t though, she looks like she’s had four kids and married a truck driver, and guess what?  It’s American that you take pleasure in seeing that suffering.

Same thing here.  Lindsay Lohan was hot during that creepy borderline period where people started counting down to her 18th birthday, which is particularly depressing when the people doing the counting down will never even meet her, much less have a chance to get the clap from her.  And she rode a few year period where every time she posed in a magazine, or was spotted in a bikini, people would lose their shit in an American phenomenon we refer to as, “Boob madness.”  When she dated Fes from That 70’s Show everyone started to hate that dude for being able to hook up with Lindsay Lohan.  And now she’s doing coke off her dashboard (which really, in LA, is the equivalent of jaywalking) and getting into car chases and shit (ahhhh, okay, that explains the Mug Shot) and has just degenerated from “Hot” to “Gross” faster than that naked chick that turned into a corpse in The Shining.  Look at the expression on her face.  That is the look of someone who, through her coke haze, was told, “Okay, time for your Mug Shot,” and she clearly thought they said “Money Shot.”  And she’s okay with it, just so long as they leave an eight ball on the counter when they’re done. 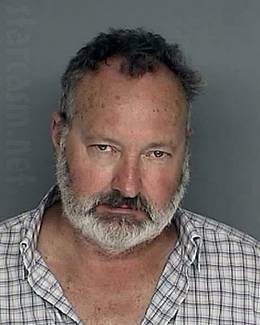 Yes, Virginia, there is a Santa Claus.  Oh shit, sorry, no that’s the guy who got butt raped by Aliens in Independence Day.  No way, that’s the older brother of the dad in Frequency?  Holy crap, what happened to him?  Well, if you can’t see it in the eyes, a whole boatload of crazy happened to Quaid.

Basically Quaid and his wife have been just trashing hotel rooms, then they were living in a house that they did not own (whoops, burglary), and now they’re trying to get refugee status in Canada, because apparently there is a seedy group of hit men who are killing Celebrities, and The Quaids are next!  We stopped caring when we heard they were trying to move to Canada, which just makes us despise the Quaids and really enjoy this Mug Shot.  In the words of our fourth best president, Harrison Ford, “Get off of my plane!”

And really, that is the reason why we as a country love Mug Shots.  It explains TMZ’s baffling popularity, and in a way, it describes the Human Spirit.  It’s funny to see role models fall.  And if they’re shitty role models, then it’s really funny to see them fall.  So next time you go out and get yourself arrested, just make sure you make yourself famous first…otherwise, the legal system is going to just absolutely destroy you, ha ha, no seriously they’ll torture a confession out of you Slumdog Millionaire style.  That is why, fellow Americans, you must follow this American credo:  “Don’t do shit to get yourself arrested, unless you’re very famous, or very rich.  But preferably both.”