As mentioned in yesterday’s fun fact, American celebrities take advantage of their wealth to practice their “I don’t give a shit” faces for mug shots.  Continuing with that theme, AFFotD presents to you the mug shots of (currently) respectable Americans.

Ha!  Holy shit!  When did Bill Gates look like Andy Dick riiiight before falling off the wagon again?  He looks like he should have a skateboard and no friends.  There’s just so much going on there, it’s an overload of information.  The shit-eating-grin that just screams, “I can buy and sell your ass.”  1970’s Porn Sunglasses, worn indoors, that say, “Someday I’m going to marry someone that causes people to say, ‘You think he’d be able to bag a hotter chick with 40 billion in the bank.’”  He’s got a big DJ Qualls vibe going here.  If you’re wondering, “What did he get arrested for?  Did he kill a hooker or something,” we’d say, yes.  Or, no, wait, it was speeding and driving without a license.  Yeah that makes sense.  If it’s Bill Gates being arrested, you know he’d have to have done something either really lame, or really dark.  We guess it’s good that no one got hurt.  We guess. 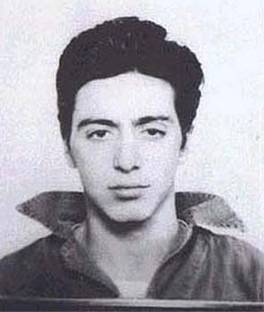 You just know the guy who took this picture “Disappeared” suddenly.  Look at that look on his face.  Someone is about to get fucked, and it’s not Scarface.  If you would feel forced to assume that Al Pacino could only be arrested at the age of 21 for having a concealed weapon, congratulations!  You clearly have met Pacino and realize he is not to be messed with.  Pacino got off because he said he was carrying the weapon “For an acting part.”  Which would sort of be like if David Duchovny banging a whole slew of hoodrats just because he was in a TV show called Californication (oh wait…)  We have to surmise that just outside the police station, there were a half dozen men with suspiciously rolled up newspapers, and the Cops just said, “Oh, uh, yes, acting role, sure thing Mr. Pacino, please don’t hurt us.”  And Pacino, God bless him, didn’t.  Well, much.  Otherwise, how are they gonna learn their place?

Pee Wee, nooooo!  We didn’t realize that Reubens had a Guy Fawkes phase, but apparently…

Reubens was arrested for completely misunderstanding the proper way to “patting yourself on the back.”  His beard says, “I’m not working at the moment,” but his eyes say, “Fuuuuuuck, and not for a while probably.”  The look on his face just screams, “I thought it was only illegal if you looked another dude in the eyes during the movie.”  Really, the best part of this “Nicholas Cage in Con Air” look Reubens has going for him is that it’s very easy to look at that picture, look back at our innocent childhood, and say, “Oh, thank God, that’s not actually Pee-Wee.”  Because it isn’t.  It fucking isn’t, okay?

Robert Downey Jr. is Iron Man, so Robert Downey Jr. is awesome.  He also has been arrested more often than that homeless guy who poops on the train.  Here we have Downey’s, “Yeah, yeah, I know what to do,” look, with just a hint of, “It’s been so long since I’ve had a good film role I really don’t need to be in shape at the moment.”  We’ve seen Mobsters that just made sure that no witness would live to take the stand with less smug looks on their face.  God knows why he seems so pleased with himself, but if we had to guess we’d have to assume…coke.  But what does a coked out Robert Downey Jr. look like when he’s taking correspondence courses on Mad Science?

Holy shit, it’s like Sean Connery and Albert Einstein had a baby, and then they maced the shit out of it.  We’re not sure what’s more jarring here, the bloodshot eyes, the pompadour, or the fact that if you look at the top half of his face and the bottom half, it gives off totally different vibes.

This is a serious man.  A man contemplating his life.  He is not angry, he is just disappointed.  He’s resigned to what he did, but focused on changing it for the better. 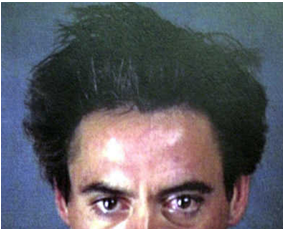 But at least you don’t feel like you’re physically going to be harmed with these two photos.  The same cannot be said for…

If some sort of facial pattern expert wanted to peg down the expression someone gives when their mindset is, “I’ll suck your dick for some crack,” this is it right here.

So, rich geeks, petrified newsmen, childhood icons, and Iron Men are American.  We see their Mug Shots as a warning sign, but we know that they pulled out alright in the end.  The same cannot be said for the last category of Celebrity Mug Shots.  We call them the, “Ha ha, we laugh at your pain!” category.  And they will be coming your way…in tomorrow’s fun fact.