“Begun, the beer wars have.”

“America loves beer!” is something our writers shout every day, often while confronting concerned family members reading letters at the urgings of a strangely persistent psychologist.  “America needs beer!” they often add afterwards as their mother starts slowly sobbing into a handkerchief.  “Don’t judge me okay, goddamn it, I’m not the reason dad left!” they inevitably end up saying, but that’s a personal matter we’d rather not get into.

Yes, beer saves us from overrated things like “sobriety” or “the crippling weight of reality” and America needs none of those things.  That’s why the average American drinks almost 21 gallons of beer each year.  That means America as a whole consumes more beer in a year than they do milk.  And milk doesn’t exactly have an age limit tacked onto it.

The truth of the matter is, despite how much Americans love their beer (which ranks just above “puppies” and just below “nothing”) we have to allow ourselves to realize that we live in a global society, and other countries brew and even drink their own beer too.  Even North Korea has beer.  Granted it’s just basically fermented gravel with some stray barleys thrown in there, and the bitterness of the hops is replaced by a generally uncomfortably forced Nationalism, but the point still stands- we’re not alone in this beer drinking world. 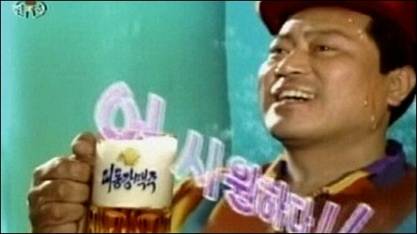 But while the whole world may agree on the deliciousness of beer, there are still some points of contention.  And that is why we at America Fun Fact of the Day are going to be the first combatants in the great World War of Beer, because it’s time to set things straight.  When we hear article after article discussion European beers lowering their alcohol content, we know it’s time to stand up for the rights of Americans and high-gravity beer drinkers everywhere.

That’s right, folks.  Fill up your five gallon kettles with some water, steep some hatred in there, bring it to a boil, and add that hoppy bitterness because we are here to declare…