“It’s called the Money Plane. Some of the baddest motherfuckers on the planet are on that plane, all craving action. Whatever you want to wager on, the Money Plane has you covered. You want to bet on a dude fucking an alligator? Money Plane.”

On July 10th, just less than a week after its birthday, America was blessed with a belated gift. With of a reported budget of “under $50 million” according to Wikipedia (because the director jokingly said “Well it was under $50 million”) and an actual budget of, like, $75 bucks and the promise to delete several portable hard drives worth of compromising data, we were given MONEY PLANE.

Don’t let the haters fool you. Don’t listen to the 3.3/10 rating on IMDB. Or the 27% Fresh rating on RottenTomatoes. This movie is gold.

And speaking of gold, we’re going to award it SEVENTEEN FUCKING ACADEMY AWARDS.

All of the Oscars Awarded to MONEY PLANE, the Best Movie of All Time

First, we apologize to Da 5 Bloods, The Old Guard, The Invisible Man, Palm Springs and probably like 10 movies we forgot about from this year for missing out on their legitimate chance for awards this year. It’s just an honor to be nominated.

But in 2020, only one film can claim to involve WWE’s Edge sitting in a cockpit while Thomas Jane kills people with *checks notes* *what?* *lol* a cheap ass Toys-R-Us drone holding a handgun, nor does it have *checks notes like seriously eight times* a flight attendant ripping off a man’s ears.

This is more than enough for MONEY PLANE to deserve ALL of the Academy Awards, which we plan to preemptively award right now, just to save the Academy the trouble of actually voting.

But before we do our redistribution of wealth, we’ll give the uninitiated a quick synopsis of this beautifully dumb film. 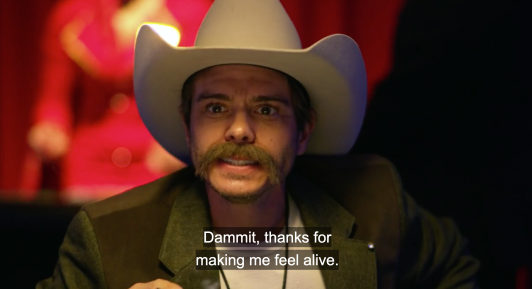 The basic rundown goes like this—MONEY PLANE was written and directed by Andrew Lawrence, of Lawrence Brothers fame, and features all three of said Lawrences. It tells the story of Jack Reese (Played by Edge/Adam Copeland) and his team of thieves who owe a debt to Darius Emmanuel Grouch III, aka “The Rumble” after failing in their attempted heist of a $40 million painting called the Disturbing Duckling.

To make up for this gaffe (his team was set up by Grouch, you later find out) Reese has to infiltrate the MONEY PLANE to steal a billion dollars in cryptocurrency. What is the MONEY PLANE? Well, we’ll let Darius Emmanuel Grouch III A.K.A. The Ruckus tell us himself.

For starters, the MONEY PLANE has… 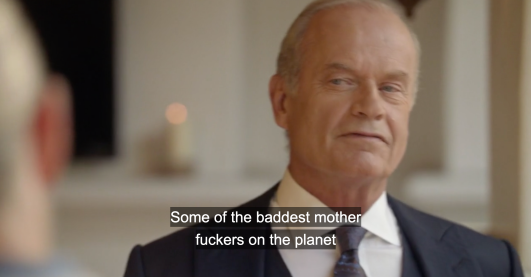 The MONEY PLANE also has standard gambling games (Texas Hold ‘Em), criminal gambling games (Russian Roulette), and um, what the fuck gambling games (“How long will this man survive fighting a cobra” and “How much do you have to pay a man to chop off his friend’s arm.”) It’s wild.

If you’re still not sure what to expect on the MONEY PLANE, Kelsey Grammer himself is here to eloquently give you the 411.

This is the point where we will say SPOILER ALERT, but also honestly, the movie is almost better when you know what to expect. BUT HERE GOES.

Reese (who, again, is played by Edge of WWE fame, and has exactly one fight in the whole movie) boards the MONEY PLANE to purposely lose at poker so he can wander off and knock out the two pilots of the MONEY PLANE.

He runs operations from the cockpit. Isabella (played by soon-to-be-Academy-Award-winner Katrina Norman) is on the inside as a flight attendant. Trey (Patrick Lamont, Jr.) gambles on Reese’s behalf, posing as his associate Mr. McGillicutty (the joke is that Trey is black, so, lol, Irish name. Yeah, sigh).

And on the ground, providing tech support, is Iggy, played by writer/director Andrew Lawrence. There’s also a concierge, played by Joey Lawrence, and Matthew Lawrence (the one you know from Boy Meets World) plays The Cowboy, JR Crockett himself, who challenges Trey to a game of “Roulette…Russian style.” It does not goes well.

Anyway, it turns out that THE RUCKUS had set up Reese on the Disturbing Duckling job, and set him up on this one too. No explanation is given as to why other than “he’s a dick?”

He sends men after Reese’s wife (played by Denise Richards, who is in this movie for three minutes), but they are all taken out by Reese’s best friend (played by Thomas Jane, a.k.a. The Punisher. a.k.a. a man who has given no shits since playing The Punisher).

Thomas Jane had previously foiled The Ruckus’ sabotage attempt (which involved ambushing their man on the ground, Iggy) by using the cutest little drone with the cutest little gun and um *checks notes a million times* tearing one right up the bad guys’ asses.

Anyway, eventually they steal the bitcoin from MONEY PLANE, but distribute all of it to charities (this idea of them as Robin Hood-like thieves literally comes from nowhere). Reese records THE RUCKUS talking shit about the people on the MONEY PLANE, so the very rich criminals who run the enterprise decide to have him killed. Frasier goes out like Scarface.

Oh, and in the final scene of the movie, it’s shown that the team finally was successful in stealing Disturbing Ducking, which looks like this.

Enough foreplay! Let’s get into the awards!

The common talking point for 2020 is that a lot of films that were thought to be Academy Award contenders have been pushed back because theaters seem to be closed for reasons we can’t explain.

That said, a lot of quality films came out in 2020, and many other likely great films are still scheduled to be released. But, with all due deference to Spike Lee’s masterful Da 5 Bloods, you can’t compete with true poetry.

A true tour de force in his directorial debut, the 32-year-old was the writer, director, and a co-star in this film. Not since Clint Eastwood in Unforgiven have we found someone so comfortable on both sides of his own camera.

Lol four people wrote this movie. Anyway, OSCARS FOR ALL!

All of these are the random categories that no one cares about anyway, so why not give them to Money Plane, a movie where this happens.

We don’t know enough about sound work, so we just put the sound mixers in one category, and the other sound people in the other.

Honestly the only scene that clearly used CGI in this was someone being eaten by piranhas for betting purposes, so we decided against GIF-ing that for you.

The costumes in this movie are honestly very fun and we’re here for them. GET THAT GOLD DONNIE!

Everyone looked great? Sure. OSCAR!

Honestly, is just one Oscar even enough for Austin?

We don’t have any jokes to make about the film’s score, other than to say that the music was fine, and Bateman is a borderline hero for holding back on the natural instinct to just put “Yakety Sax” on loop throughout the whole film.

*Dramatic music rises as Austin Nordell hugs his loved ones and walks to the stage, John Hodgman’s voice calmly blasts over the PA system*

“This is Austin Nordell’s second Academy Award nomination, and second win tonight, both for MONEY PLANE.”

At the end of the movie the team finally steals the priceless Disturbing Duckling they had tried to steal in the opening scene.

The successful heist, which occurs entirely off camera, involves stealing the original painting and replacing it with this true masterpiece.

Fuck rules, that’s animated, and that’s high art. GIVE THEM THEIR OSCAR! 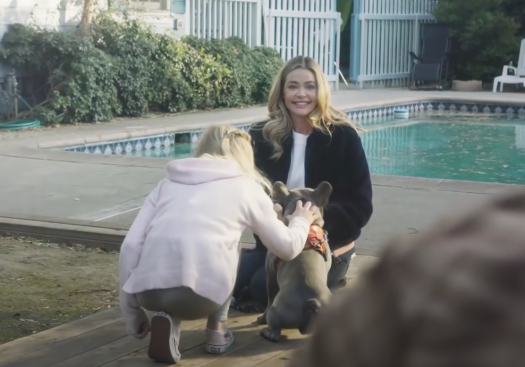 There are literally three adult women (the main character’s young daughter also speaks) that have lines in this movie, and one of them is a flight attendant who basically rolls her eyes at Trey because doesn’t have any guns to surrender before boarding MONEY PLANE.

You might be asking, does this film pass the Bechdel Test? Hmm…how can we best answer that?

Well, there’s a moment early on where one of the bad guy characters makes a crude reference about how much it would cost to sleep with the flight attendants. And “The Concierge” gets very serious, and says, basically, “You are talking about members of our staff, and you will treat them with RESPECT.”

And then he immediately follows up the pregnant pause with, “Oh but we got lots of prostitutes here!”

Anyway, Denise Richards showed up to set for like a day to portray the “loving mother” and play with a cute dog for a scene and a half. Fuck it, let’s give her that Oscar!

We were so close to giving it to Al Sapienza, because we made it this far without pointing out that Mikey from The Sopranos was in this as “The Bookkeeper” just chewing up all the scenery and loving it.

But really, it was never even close. Thomas Jane leans into the pure camp of MONEY PLANE, and it is a wondrous sight to behold.

Jane was on screen for roughly seven minutes, and in those seven minutes he breaks into his best friend’s house, grabs a beer with said friend, plays video games with his Goddaughter, kills a group of mercenaries by operating a drone holding a pistol, cooks some pasta, kills some more bad guys while cooking pasta, and smokes a pipe that he basically demanded he be allowed to randomly puff on because he found it somewhere and thought it’d be fun to use for the movie.

If that gif above is not enough to convince that this is some world-class Oscar-worthy shit, well all we can say is…

People may be crying foul, since Adam Copeland, WWE’s Edge, is the clear lead actor in this film. And he plays the role with aplomb. His 6’4 frame enhanced by his choice man-bun, and eyes that sort of…just…bug out as if to say, “Why am I in this movie?”

In 1991, The Silence of the Lambs was released, the following year becoming the third and most recent film to win the “big five” in the Academy Awards, for Best Picture, Actor, Actress, Screenplay, and Director. Anthony Hopkins won an Academy Award for his role as Hannibal Lector, where he only had 16 minutes of screen time.

Are we saying that Kelsey Grammer’s turn here, over roughly 9 minutes of a 88 minute film, is a worthy comparison to Sir Anthony Hopkins iconic work?

Yes. Of course we are.

This entry was posted in America Fun Fact of the Day and tagged Academy Awards, America, Money Plane. Bookmark the permalink.