“Unfortunately, just a little small, and not grabbing the tricks.”

~Literally the Most Polite Olympics Announcer Ever

For the last few weeks, our TV sets have been (largely idly, but still) tuned to the Winter Olympics, that one time every four years where dozens of nations can get together and pretend they understand advanced curling strategies.

We’ve been watching because it’s our duty to root for America in the Olympics (even if we’re getting our ass handed to us by Norway) and also because the biathalon looks goofy as hell. Eeven though we don’t understand how there are so many different biathalon competitions, nor can we figure out how America is never good at that sport. We have way more guns than France, so what the hell is this Fourcade guy doing that’s so much more elite than our own athletes?

Anyway. As we’ve been watching speed skaters fall and ice dancers try very hard not to bang each other on the ice, we came across our favorite athlete of all time. While she is in fact an American, she qualified for the Olympics under the Hungarian flag on the Ladies’ Ski Halfpipe. And…like, we linked her run at the top of this article, but we’re going to link it again here, because it is the most wonderful and hilarious ski run of all time. Seriously, watch it. We’ll wait.

Holy shit, right? Like, she just…just skis up and down the halfpipe, never attempting a jump, and just…basically staying upright. And this was in the Olympics. The winning score was more than double what she was awarded! How did this happen!? Well, we’ll dive into that, and also try to piece together a general history of Elizabeth Swaney, our new favorite athlete. 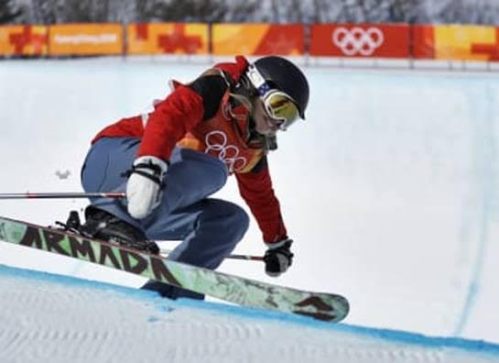 Elizabeth Swaney was born on July 30th, 1984. While she currently competes for the Hungary Olympic team, she’s originally from Oakland, California. A graduate of University of California, Berkley, where she majored in Political Economy of Industrial Societies, German, and Political Science, she has a pretty impressive history of trying to grab onto fame in some form or another.

When she was 19 years old, she ran for Governor of California during the 2003 recall election that gave us the Governator. She later tried to become an Oakland Raiders cheerleader, and lost out to…well, the rest of the Oakland Raiders cheerleaders. She got a master’s degree from Harvard in real estate studies at the School of Design Studies and works as a tech recruiter in the Silicon Valley, but most importantly, she’s an Olympic athlete.

First of all, let’s look at her athletic backstory. She was the coxswain (*holds back a giggle*) for Cal’s Men’s Crew team from 2003 to 2005, and in 2010 she was an assistant manager on Harvard’s track and field team. She didn’t start skiing until she was 25, but at first she didn’t try to use that sport to work her way into the Olympics.

First, she tried in 2013 to become a skeleton competitor for Venezuela (her mother is Venezuelan), which admittedly is a sport that, even if you’re bad, is scary enough to warrant respect. When that didn’t work, she decided to use her grandparents’ Hungarian lineage and compete in the women’s skiing half-pipe, which doesn’t really have that many people willing to compete in it.

We…don’t believe she ever tried to join the Women’s Basketball team, but it’s possible?

She managed to accrue enough Freestyle Skiing World Cup points to qualify for the Olympics, partly because only like 24 or so women are doing the skiing half-pipe, but also because she managed to get 13th out of 15 at a Chinese World Cup event in Secret Garden, which was her best finish (and also was a tournament that most people in the sport skipped to take place in a more popular event at the Copper Mountain Resort in America). Here, her tried and true method of “just…don’t fall” was just enough to help her qualify for the Olympics, and so she did. And then she went out there and…stuck to her guns, doing nothing. It’s inspiring, really.

Since she’s completed her initial two runs, there have been a lot of articles out there saying that she shouldn’t be in the Olympics, or that she’s a jerk. And we disagree. She is a dreamer, she is living her best life, and she is American dammit. And she’s our current favorite athlete.

When we watch the Olympics, we’re supposed to be in awe of these superhumans accomplishing impossible feats, but after they all make it look so easy, it’s easy to get jaded. “Oh, Nathan Chen didn’t get a medal because he kept falling down trying to spin four times in the air while moving on slippery ice with knives on his feet? MAJOR FAIL,” we shout at the screen. When really, we should be thinking, “Nathan Chen didn’t get a medal, but his is still more athletic than we will ever be in our lives, and we hope he’s having, just, all the Olympic Village sex right now.”

The Real Silver Medal of the Olympics

So yeah, Liz Swaney skied a run that basically pissed out the words “Ha Ha Look At This Loophole, IOC” in the snow, but that shouldn’t take away from the fact that she wanted to be an Olympic athlete, and she made it happen.

Hell, she didn’t even start skiing until 2010, when she was 25. But just look at what she has accomplished in her life. She went to Berkeley Undergrad, where she had three majors and won a Pac-10 championship on the crew team. She ran for Governor of California, where she did so badly the college newspaper article about her run is now a dead link, and she’s not listed among any of the 159 candidates on the election’s Wikipedia page.

She then auditioned for the Oakland Raiders cheer squad, and took another L. Even her attempt to compete in a winter sport for Venezuela didn’t work. But still, she came out, with two degrees, a well-paying job, and a whole lot of moxie, and achieved her dream. To get last place in the Olympics. If that’s not the American spirit, we don’t know what is.

So we salute you, Elizabeth Marian Swaney. You’re our new favorite Olympian (at least until that Canadian Ice Dancing Team takes American citizenship and get together to make some babies).