“But how did they…you know…”

Trust Us, We’ve Been Wondering the Same Thing, All We’ve Got Are Theories at This Point 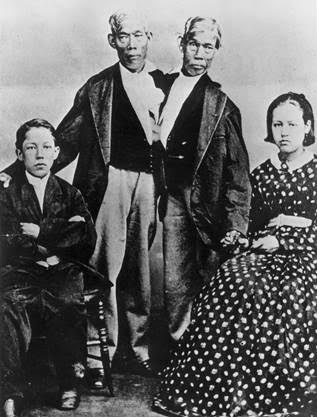 We as a species have been making humans for long enough that we’ve mostly got the kinks worked out. Two people get sweaty together, nine months later a new person comes out, and typically that person has a set number of fingers, toes and, like, bones.  Listen we’re not biologists or whatever, but you get the point.

However, sometimes that whole process doesn’t exactly work out as intended, which is what happened to Chang and Eng Bunker, two Thai-Americans born in the early 19th century.  Specifically, their number of fingers, toes and, like, bones…well, sort of doubled. Yes, as you’ve probably figured out from the picture just above this inelegant paragraph, Chang and Eng Bunker were conjoined twins.

Actually, they’re kind of the reason why conjoined twins are called Siamese twins, and will be about 75% of the time no matter how angry you get about it online. Despite being born in a time and place with the odds stacked against them in the most impressive way possible, they actually ended up living a full and American life.  They pretty much represented the American Dream (okay but with more slave owning, *cringe*).

Chang and Eng Bunker were born on May 11th, 1811 in what is now Thailand, but at the time was Siam (hence the Siamese thing, if you really need us to hold your hands through this whole thing). Now, not to get all depressing in this jokey article that’ll have a lot of “but how do they do sex” jokes in it, but conjoined twins don’t often survive birth—today, the survival rate is between about 5 and 25, and that’s with modern medicine.

It’s frankly a minor miracle that they managed to survive the condition being born in Siam in the early 19th century. Even in heavily industrialized nations, the state of the medical industry in 1811 was pretty much a doctor giving you poison to cure a cold while saying, “If you didn’t want to die horribly, why’d you get sick then, smart guy?”

But the Bunker brothers did survive, aided by the fact if you were going to be born conjoined, they pretty much picked the best way to be stuck together.  The only major organ they had that was fused was the liver, and they were joined at the sternum by a small piece of cartilage.  So apart from being, well, unable to be apart, they each had full independent systems.

Even then, though, they were lucky to survive childbirth—the ligament connecting the two was twisted at birth, and their mother untwisted it and adjusted the children, who she named In and Jun (which we made Eng and Chang in America because we’re so lazy with saying non-American names) so they could survive without restricted blood flow or any traumatic attempted separation. 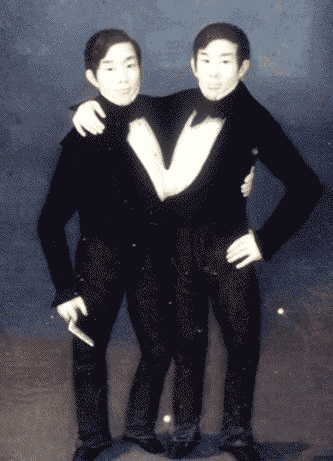 Chang, the slightly shorter of the two twins, was on the left side, and Eng was on the right, and their mother encouraged them to exercise and work on having a relatively normal childhood.  Then, when they were 18, a Scottish merchant named Robert Hunter saw the two swimming, and his eyes immediately did that cartoon “flashing dollar signs” thing. So he got their parents to agree to take them out West where they could be go on the road as a “public curiosity” (freak shows, we’re talking about freak shows).

Now, as far as freak shows in the early 19th century went, they came out pretty lucky.  They were paid (pretty well) for their performances, which had a bunch of “look, they’re doing stuff, but, like, attached” gimmicks.

They would do somersaults, they would lift heavy weights (they were pretty athletic and strong), and they’d play chess, which sounds about as boring as it probably was. Still, they were a hit both in America and in Great Britain, where they traveled in 1830. Eventually, when their contract ended, they went into business for themselves until 1839, when they bought a farm in Wilkesboro, North Carolina, and settled into a life of, *checks history books*, oh no, *double checks to make sure* having slaves on a cotton plantation.

So, um, yeah.  During a time in America where racism was, like, the only thing, apparently the Bunker brothers counted as “White” in whatever weird systems were in place in the Antebellum South.

Either way, that meant that they were able to get along better than just about any Asian immigrant for the next 100+ years, but also that, yeah, they could own people.  So, um, yeah.  Am…American Dream…w…woo.  This…well let’s just, let’s just move on.

Once they settled in, Cheng, who was the more assertive and vocal of the two, began developing feelings for his neighbor’s daughter, Adelaide Yates.  Because societal norms are fucking weird, it was determined that if Cheng was going to have a wife, then Eng’s wife better damn well be her sister, otherwise it’s sinful or something (yeah…).

But Adelaide’s sister, the more…let’s say, robust Sarah, was not so into Eng. It took five years for her to finally agree to marry Eng while her sister married Cheng, and they did so in 1843 with the twins being 33 years old and their spouses being…well, 20 and 21.  Um, maybe…don’t think too much about the math behind that whole five year courtship thing.

So now, you’re probably wondering, “So…so did they fuck?”  And oh yes, they did indeed fuck. Chang had eleven kids, and Eng had 10. That’s…that’s frankly impressive, we don’t know what else to say about that. There are currently over 1,500 direct descendants of these prodigious baby making twins, which like, good job, we guess?

Anyway, eventually the sisters began to, well, hate each other—we don’t know the dynamics, but we guess after years of sharing the same marital bed with each other’s husband and brother-in-law they got on each other’s nerves. So the brothers set up two different houses, and would take turns visiting each wife.

The Bunker’s fortunes took a turn for the worse when a little thing called the Civil War happened, and if you’re guessing that they had a change of heart about slavery and sympathized with the North despite their residence in North Carolina, well, no of course not, they were Southern Plantation owners, who do you think they backed?

In fact, a few of their sons served in the Confederate army.  But, when the war was lost, they pretty much lost their livelihood (to which we say “boo fucking who, you owned people, you deserve it”) and tried, unsuccessfully, to earn money back with public exhibitions. 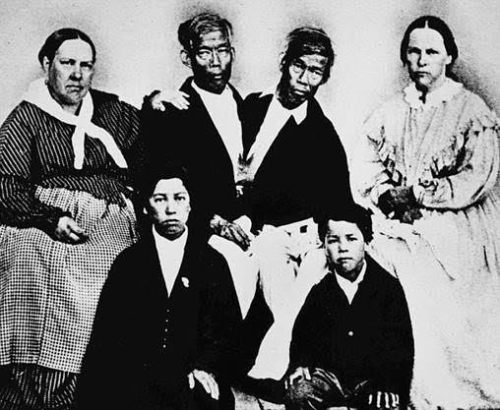 After the war each brother really leaned into his vice of choice. Eng was a big gambler, and a fan of poker, while Cheng was a full fledged alcoholic. Each brother had a fully separate circulatory system, so Cheng’s drinking would not get Eng drunk or anything like that, but when Cheng had a stroke in 1870, his health began to wane rapidly.

Four years later, Cheng developed a bad case of bronchitis, and died in his sleep on January 17th, 1874.  Upon waking up to discover his brother was dead, Eng exclaimed, “Then I am going!”

A doctor was hailed to separate Eng from his recently deceased brother, but before he could perform surgery, Eng died later that day. Doctors still aren’t entirely sure what killed Eng, as he was completely able to live independently from his brother. A common theory is that he had a heart attack, thanks in large part to the shock of, you know, waking up to find a dead person attached to your sternum.

But anyway, that is the tale of the first public Siamese Twins, two men who found fame in show business and used it to…well be Confederate asshats, their story definitely has a lot of shades of gray.  But still, Eng and Chang Bunker were historic in their own way.  Especially the whole 21 kids between them thing, because we just can’t get over that.