The Strangest (Unofficial) Lego Sets You Can Actually Buy

~That’s not their slogan…

Legos are so ingenious we’re frankly surprised they’re not from America.  They were actually invented in Denmark or Sweden or one of those countries way up over there, we don’t really care, we have a hard enough time figuring out if it’s Vermont or New Hampshire that borders Maine to care about where other countries are.  That being said, Lego is kind of the perfect toy—it encourages creativity in children, and Asperger-level concentration and commitment in adults.  The genius of Lego lies in its adaptability—if The Lego Movie taught us anything, it’s that Will Ferrell is kind of an asshole of a dad.  No, wait, it’s that you shouldn’t limit your imagination.  Well, that imagination is alive and well in America, in the form of custom Lego sets, for sale, by third party vendors.  Okay, so maybe you’re not using your imagination by buying them, but they are at the very least…unique.

The Strangest (Unofficial) Lego Sets You Can Actually Buy

We don’t know why this Lego, which you can buy for $15 at citizenbrick.com, doesn’t actually call itself Harry Caray anywhere.  Now, having a Harry Caray Lego piece (for, again, fifteen bucks.  For one) is both very strange and yet kind of understandable.  It’s a kind of cool Lego figure.  But what we can’t figure the hell out is this—why the hell is this product called “Cubs Enthusiast.” The description doesn’t clarify it either—“Pause to consider the indomitable human spirit, when in the shadow of a century of defeat, raises a defiant fist to the sky, and with steadfastness of granite, whispers ‘Next Year.’”

First of all, y’all are selling a Harry Caray Lego piece, nothing about that requires flowery goddamn prose, as A- it’s a Lego, and B- Harry Caray’s level of elocution pretty much peaked at the one time he was on the radio and made the call, “Here’s the pitch…*crack of the bat* *audience cheer* WHAT A PLAY!”  That actually happened one time.  So yeah, lose the indomitable spirit shit.

And finally, if you didn’t know who Harry Caray was (Hey there kids who weren’t old enough to remember 9/11!) there is literally nothing about this that says “Cubs fan.”  There’s nothing Cubs about it at all.  Even the tie doesn’t have the Cubs team colors.  What a puzzling, puzzling item.

Listen, who among us hasn’t dreamed of a Lego set strip club, complete with two female strippers, one (hairy-chested) male stripper, and a DJ (“Alright everyone Summer’s next up on the stage let’s hear it for Canddyyyyy don’t forget to tip your waitress”)?  Sure, you tried to make one at home, but did it have zebra print couches?  Did it have money littering the stage?  Did it have a stripper on a stripping pole wearing a small clear Lego block that is clearly meant to be the Lego version of a clear stiletto heel?

But seriously, the person who made this has a lot of questions to answer.  And the person who spends $250 on it probably got a good deal on it, considering it that with legal fees and everything it’s normally a lot more expensive to get your name on the sex offender registry.

Ha ha, tricked you, now you’re on the sex offender registry just for looking at this.  All you need to know about this…interesting use of a kid toy is that A- it costs $27 (plus $6 shipping) and B- the torso piece for Anastasia is very obviously from the Slave Leia Star Wars Lego piece.

Do like Ed Sheeran?  Do you collect doll’s heads?  Have you googled, “How to embalm someone so they will NEVER LEAVE YOU?”  Well you might just be the kind of person willing to pay $60 for an Ed Sheeran lego.

Banksy is a British street artist best known for his extreme secrecy and his broad, anti-capitalism, society-subverting graffiti art.  Which, for those of you keeping track at home, is about the opposite of someone using Legos to make a set “inspired” by Banksy and selling it on the internet for $40.  It’s like having a Banksy piece in your own living room!  Only, very tiny and absolutely against the spirit of everything that Banksy stands for.  Seems like a good value!

Michonne From the Walking Dead 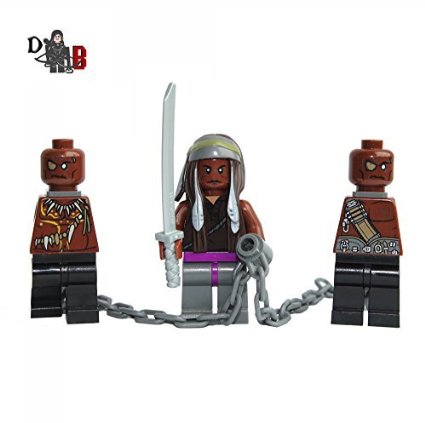 Listen, like, we…we watch The Walking Dead.  So we know what this is supposed to be.  It just…

Every Look Peter Gabriel Has Ever Had Apparently

Whoever is responsible for this store has spent more time focusing on Peter Gabriel than anyone outside of himself and, possibly, his wife.  What we’re basically saying is, if Peter Gabriel ends up murdered someday, you should probably question the dude making tiny versions of Peter Gabriel for a living first before you go onto other suspects.