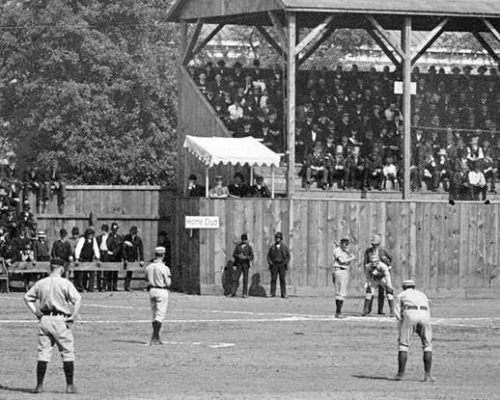 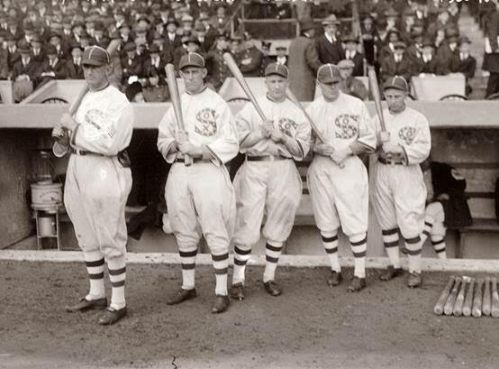 A sports team name is a lot like a band name—everyone assumes that it’s easy to come up with one, yet there are grown men who have had to spend their entire professional career calling themselves the Goo Goo Dolls.  Or Chumbawumba.  Or Better Than Ezra.  Or, okay, basically every band in the 1990s.  Basically, what the 1990s was to Alternative Rock band names, the 19th and early 20th centuries were to baseball team names.  Don’t believe us?  How else can you explain…

First of all, let’s just take a moment to address this.  Yes, not the Blues, which is a (albeit lazy) team name that still exists in professional sports today, but the Dark Blues.  We’d make a joke that they decided to specifically distinguish the shade of their team color because they had to find a way to distinguish themselves from the Indianapolis Blues, except for the fact that the Indianapolis Blues didn’t exist until the year after the Dark Blues folded.  They at least seemed to recognize that they either had a stupid name, or that Hartford wasn’t nearly big enough to sustain a professional baseball team (oh quiet down, Connecticut readers, don’t even pretend you go to Yard Goats games) because for their final year, in 1877, they moved to Brooklyn where they became the Brooklyn Hartfords, which is also a stupid name. 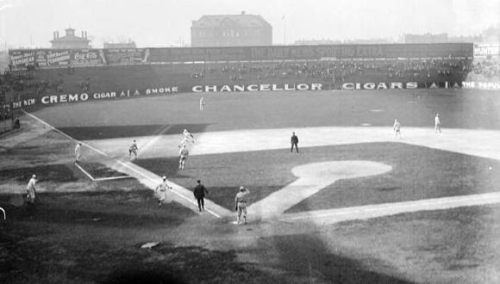 God, this team was a train wreck on all fronts.  They technically existed for one season under two different names in two different cities.  They were originally the Chicago Browns, which is like, fine, it’s a boring name (sorry Cleveland) but it’s fine.  They played about 70 games under that moniker for the Union Association in an attempt to take the Chicago market away from the Chicago White Stockings.  You might remember the Union Association as being two words you’ve only heard separately and in other contexts, since you definitely weren’t aware of it as a league—it only existed for one season, and they clearly didn’t run that type of a ship, since after their game on August 22nd, 1884, the Chicago Browns just randomly disbanded after a game and were then moved to Pittsburgh to be the Stogies, which is a stupid name, because who wants to play for the Cigars?

The Pittsburgh Stogies only had their dumb name for 18 games, going 7-11, before again deciding to disband on September 18, 1884, at which point most of the players went to join the Baltimore Monumentals for the remainder of their season before the whole damn league disbanded at the end of the year.  Like we said, the Union Association was all kinds of a mess. 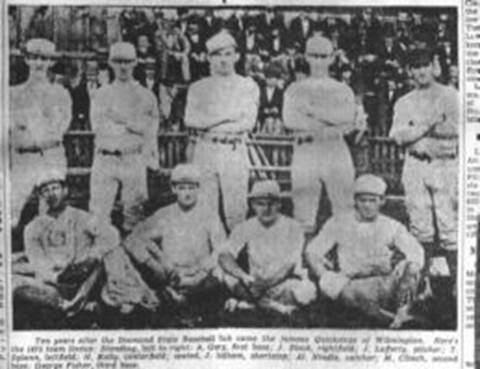 This is an adorable name.  Just adorable.  The quicksteps.  Because they take quick steps!  If you told us that the person in charge of coming up with this team name spent his waning years telling Stan Lee how to name comic book villains, we’d totally believe you.  The team was a late season replacement team in the Union Association (them again!), playing 18 games and ending with a record of 2-16 so, considering how half-assed everything about their existence was, we maybe should give the team name more credit, because they literally had to go with the first thing they could think of, and with those stakes, Quicksteps is actually pretty damn good.

Oh, and they were atrocious.  They were the best team in the Eastern League for the beginning of the season, which got them promoted to the big time to fill the void left by the Philadelphia Keystones, who folded in the middle of the season due to a lack of attendance.  They won their first game, but soon had most of their best players just ignore their contracts and sign for more money with other teams.  By the end of the season, the team’s batting average was .175.  For the whole team.  They disbanded on September 21st, 1884 because, and we’re quoting the most depressing Wikipedia statement about baseball ever, they were “unable to pay the $60 gate fee to the visiting Kansas City Cowboys as the attendance was zero.”

The moral of the story is, don’t try to start a team with the Union Association.  It’s just going to be embarrassing for everyone involved.

Come on Troy, you’re not even trying, at least put a little effort into it.  Just to show you, we’re going to exert just as much effort talking about you as you did in “crafting” your name.  Trojans. Please.

Pro tip- if you’re going to name your team after a dog, try to avoid the “cute medium sized breed” route.  A terrier is not going to inspire much awe or fear from your opponents, it’d be like calling yourselves the Kansas City Puggles.  The Terriers played in 1914 and 1915 in the ill-fated Federal League, which really was just a train wreck of bad team names.  Here is a list of Federal League names that didn’t make the cut for our bad names article—The Chicago Whales, the Pittsburgh Rebels, the Kansas City Packers, the Buffalo Blues, and the Baltimore Terrapins.  Just awful, all of them.

Terriers are at least cute.  Who’s a good dog that wants to play baseball?  That’s right!  You are!  Yes you are!

Yes, the last three entries of this article are going to belong to Federal League teams.  We cannot stress how much the Federal League needed to get their shit together.  The Newark Peppers spent its first year playing in Indianapolis as the Indianapolis Hoosiers, where they actually won the league’s inaugural championship.  Using the foresight you would expect from a league that ran itself out of business in two years, the league decided to take the reigning champions and move them all the way the fuck to the East Coast, despite already having a team in Brooklyn, thinking that they’d be able to compete against the American and National Leagues better on the coast than in the Midwest.  This mindset would later be commercialized and utilized as the business model for ESPN.

The Federal League decided Manhattan would be the perfect location for the formerly-Hoosiers-but-once-they’ve-left-Indiana-they-can’t-really-get-away-with-calling-themselves-that, but found their attempts blocked by the larger major league organizations.  So, like everyone who desperately wants to make it in New York, but finds the strains of Manhattan to be too demanding, they settled for Newark.  They called themselves the Peppers, possible due to a very mistaken belief that food is an acceptable basis for a mascot.  Seriously, the Peppers.  Just an all-around shit name for a team.

The Peppers went 80-72 while playing in Newark (though technically the field was across the river from downtown Newark, in Harrison, New Jersey) before the league disbanded after the 1915 season.  However, our favorite favorite thing about the Peppers involves their infielder, Rupert Mills, who was under contract guaranteeing him a salary for the following year as long as he showed up to the park, suited and ready to play for the team.  Now, despite there being no, you know, league, or a team to speak of in 1916, Mills would go to Harrison Park, which would be completely empty, every day for the next year, wearing his Peppers jersey and performing a physical workout to remain in playing condition.  Now, Mills was the one New Jersey native on the team, having been born in Newark, so he at least didn’t have to travel far for it, but that probably the most fitting story to illustrate how hilariously inept the Federal League was.  Just, random dude.  Empty park.  Getting paid for a season of baseball that doesn’t even exist.  History is awesome sometimes. 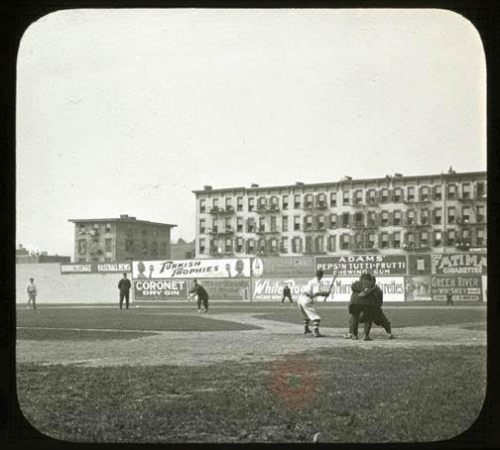 The Tip-Tops.  That’s the most old-timey bullshit we’ve ever heard in our lives.  The Tip. Tops.  This is literally like calling your team “The Bests” or “The Participants” or the “We Try Very Hard And Sometimes Win.”  It’s a stupid, stupid name that gets stupider when you realize why it has that name in the first place.  This isn’t because they wanted to describe how good they are, or how they’re the “top team in the league” or anything like that.  No, they were owned by a man named Robert Ward, who owned the Tip Top Bakery.  That’s right.  The naming parameters for the Brooklyn Tip-Tops basically had the same requirements as a local business naming a Little League team.  Did the team name a player of the game each day, with the winner of the game ball also getting a certificate for a free loaf of bread from the Tip Top Bakery?  Well there’s nothing in the public record about that, so we’d have to assume that the answer is yes.

The Tip-Tops were not tip-top in their league, either, despite the fact that the Federal League straight up did everything they could to give them every unfair advantage possible.  After finishing 4th in the league in 1914, league officials thought that in order to compete with the National and American league, the Federal League needed to have a winning team in their largest market of New York.  So, they literally just took the best player from the Indianapolis Hoosiers (aka the league champions aka the future Newark Peppers) and just, gave him to Brooklyn.   They then finished in seventh place, which is just, the funniest outcome imaginable in that situation.

Baseball is inherently silly if you actually sit down and think about it—just a bunch of men hitting a ball with a round stick running in a square and stopping arbitrarily along the way.  We guess whoever named all these teams knew that, deep down inside.  “Baseball is silly, so let’s have a silly name” at least is a better excuse for a team name than the goddamn Tip-Tops at least.  The Tip-Tops.  God.